Twilight of the Idols: Part One!

The SA Forums are a very diverse place. Among many other forums we have a games forum for people to discuss games and coordinate multiplayer games, we have a graphic design and creative writing forum, a Photoshop forum, and until about six or so months ago we had a flames forum for people to get out their aggression. This forum, which has gone through many name changes and come back around to being FYAD (short for Fuck You And Die) has, over the last six months, evolved into what amounts to an insane comedy forum. The miscreants who inhabit this realm would not hesitate to follow up a 500 word rant by someone with a huge picture of a she-male or simply "FAG".

Despite of, or more likely because of, this lawlessness, FYAD occasionally produces some of the funniest content on the SA Forums. Recently a poster by the name of Atomo announced that Captain America, superhero and champion of Democracy, was being bad. Along with this proclamation he included several 3D-renderings of the good Captain misbehaving. It was hilariously funny, but a good deal of time passed and the Captain had not returned for a second round, so I and a few others demanded he go on another rampage. What we got, courtesy of Atomo, CitrusFrog, Scar Trek, and BuddhaKitten, was a descent into madness and depravity unparalleled in the history of the Something Awful Forums. Extra thanks go to the folks at Sturk Wurk who created the super hero models for use in Poser. I will attempt to recreate the events that transpired as best as I can, but please allow me some leeway, as I am still shaken by the terrible things I have experienced. 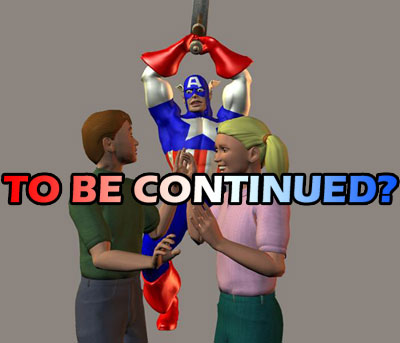 Stay tuned Friday for the exciting conclusion of this saga! Thrill as Captain America battles with Batman! Chill as this disease spreads to other DC heroes! Spill at the discovery that no location is safe, not even your children's classroom or the bathroom at home! Frill when Captain America enters a figure skating competition with America's greatest enemy; Adolph Hitler! WILL DEMOCRACY SURVIVE?

Naturally if people e-mail me and tell me this sucks then I'll be an asshole and never show anyone how it all ends. Trust me, this was just the tip of the iceberg of depravity.

This Time It's Personal!

Cliff Yablonski is back with more mayhem than ever before! Yes, he still hates you all, but this time it's a thrill a minute as Cliff and Enoch become involved in a family feud. 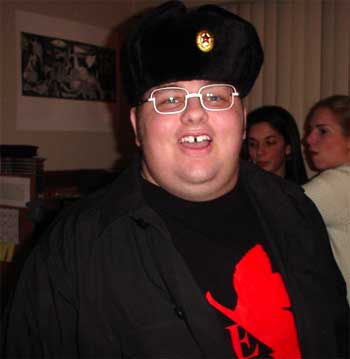 Cliff Yablonski: "That's it, it's time for a 1960's-style ass whooping courtesy of your old friend Cliff. Enoch, I'm tired of your shit and if dad could still hear, I'd call him up on the phone and tell him just what a jackass you're being for completely fuckscrewing up my award winning computer screen show!!!"

Enoch Yablonski: "YEAH, KEEP ON CHUCKING OUT YOUR PUSSY THREATS, YOU COULDN'T EVEN LAND A PUNCH ON ME IF I WAS BLITZ DRUNK AND PASSED OUT IN WADING POOL YOU INCONTINENT RECLUSE!"

Uh oh! It's best not to get mixed up in the middle when Cliff and Enoch go at it like that. Just look at the pictures and when possible listen to the soothing words of Ugly Cat. Did I mention this is the most insane update Cliff has ever done for his site? No? Well consider yourself warned now, chowderchimp.