A Letter of Complaint from Cindy Sheehan

To Whom It May Concern, 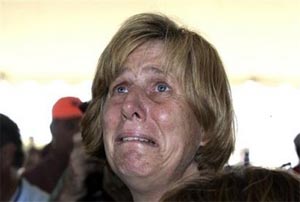 In 2004 my son died fighting an unjust war sold to the American people on lies. In 2006 I purchased a box of Shrek Fruit Gushers with "natural" Fruitomic Punch flavor. I have several issues with your Shrek Fruit Gushers and these are closely linked to the sadness I feel every Mother's Day when I realize that there will be no card or phone call from Casey. Your Fruit Gushers (Fruitomic or conventional) are waxy fruit candies full of juice that promise "an explosion of flavor", just like the IED explosion that killed my son, Casey. Very offensive.

I spoke to Hugo Chavez and he assured me that he supported my effort to bring our troops home and to receive a complete refund from your Shrek Fruit Gushers. Why do you only have two flavors in the Fruit Gusher pouch? I'm stricken with grief at the thought that even one more soldier will return home wounded from Iraq, buy a box of Shrek Fruit Gushers, and receive only two flavors. 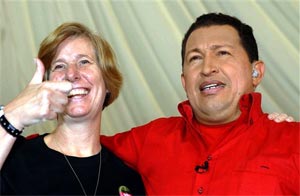 I accuse you of false and deceptive advertising. There is a picture of Shrek on the box, yet the Fruit Gushers themselves vaguely resemble gems. What do gems have to do with Shrek? I have a t-shirt with Casey's face on it and I have a lot to do with my son. Maybe your Fruit Gushers taste like Shrek. I wouldn't know for sure, but what I do know is that they taste like lies. The same sort of lies Colin Powell told to the United Nations that got us into this tragic war. Flavor lies.

While I was visiting Cuba a few days ago I noticed that they did not sell Fruit Gushers anywhere in Cuba, yet Cuba has never launched a preemptive war based on faulty intelligence. Are the two connected? You tell me, Herr Crocker!!! I find that now when I place a Shrek Fruit Gusher in my mouth and bite down, rather than the explosion of flavor promised I find only the bittersweet burst of gooey forlorn hope. Hope for our nation's future and hope that our children and their children can live in a world of peace and refunds for unsatisfactory products.

Israel may support Shrek Fruit Gushers, but was that Zionist flavor explosion worth the life of my son?

Let me tell you, Betdolph Crockler, at a rally in New York City, Jesse Jackson spoke to over 5,000 veterans, Gold Star Mothers and friends and family of our troops and pledged to take up the fight to guarantee me a refund for these inferior Fruit Gushers. He insisted that I receive a full refund and not just coupons for more Betty Crocker products. It's what Casey would have wanted. 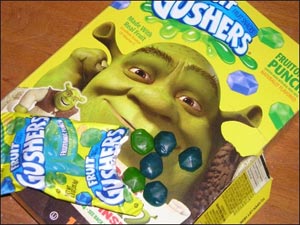 I want you to know right now I am crying. If I ever wore makeup it would be running down my cheeks. My tears are falling on this page so if some of the ink is running that is why. They accuse us of supporting cut and run, but I would rather support a new direction and a new refund. I cry for the loss of my son and the loss we all feel whenever we taste your terrible Shrek Fruit Gushers.

This is the only warning we are going to be giving. You know our demands and until those demands are met myself and all Gold Stars Mothers (that star means their children died for a false war and bad Fruit Gushers) Against Shrek Fruit Gushers will be speaking to the media about your actions.

If these demands still are not met, we will begin camping outside your Fruit Gushers factory in Guadalajara, Mexico. I already have a suitcase fully packed with candles, card stock and markers as well as a whole notebook full of rhyming slogans we can yell.

Writing this letter because Casey can't,

For Your Consideration: Books

Hey folks, you might remember me from the various ads and week long hell of plugs as the author of My Tank is Fight! Well, a couple good eBuddy iFriends of mine are releasing books in the not-too distant future and it's my duty as an upstanding Netizen to give them a few good words.

I've known Drew Curtis, the creator of Fark and super nice guy, for over 6 years. Not everyone loves the comment crew over at Fark, but it's hard to deny that the site itself has been a very influential and fun part of the Internet. Drew has a book coming out entitled, let me stretch my fingers here, It's Not News, It's Fark: How Mass Media Tries to Pass Off Crap As News. If the book is as good as that mega title then it's definitely worth a preorder. Drew is a funny and smart guy and I would expect nothing less from his book.

John Hargrave has been running prank-focused humor site Zug for years and, while he can be hit or miss, when he hits it's straight out of the park. His credit card prank is one of the classic pranks of the Information Age and his new book of pranks promises to deliver more of that sort of quality material. Read a couple of the pranks on his site and if you enjoy it, do me and him a favor and preorder a copy of Prank the Monkey, the book with the worst title since My Tank is Fight!.