The five men huddled together in the trench as suppressive fire from the Germans sprayed clouds of black soil into the air all around them. Sarge grunted something that vaguely sounded like acknowledgement into the field radio and slammed it into its place on Radio Guy's backpack, sending the smaller man face first into the dirt. He turned toward his men and pensively chomped on his eternally unlit cigar. An awkward pause followed. Sarge's eyes had been squinted tightly since the day he was born, which often made it impossible to tell exactly where he was looking or how sour the lemon he just ate was. At last he spoke. 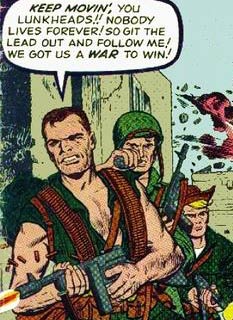 "Alright boys, our orders are to take that hill."

He raised a knobby hand to the north, his gnarled index finger pointing as straight as it possibly could toward a mound of dirt that stood slightly taller than their trench was deep. To its left was a heavily fortified machine gunner's nest. To its right, a rumbling Panzer tank and a beehive that someone had accidentally knocked over.

"You're kidding," said Loverboy, setting aside his trusty mirror long enough to stand up and completely expose his head to the Germans. A bullet zipped through his golden locks, gently pressing an errant hair back into place. Loverboy picked up his mirror once more and surveyed his quaff, then waved thanks to the shooter before settling down in the trench once more.

"Ain't kidding," replied Sarge. "It's a suicide mission but orders are orders. Looks like you might have to actually shoot that rifle of yours for once, Doc."

The unit's medic nodded and nervously wiped his glasses. There was a very good chance someone could get hurt out here. It was only a matter of time until the others found out that all he had in his medkit were band-aids and aspirin, and that those were the only forms of first aid he had been trained to administer. Desperate to divert attention from himself, he turned to the last of the five men.

"What do you think about all this, Dogmeat?"

Dogmeat rustled in his stretcher, moaning.

"Tell my Ma I... love her. Tell Pa... I wanted to... make him proud." He began to cough, producing rattling, wet sounds that reminded Doc of an asthmatic cat hacking up a fur ball coated in Jello. Blood continuously spurted from the hole in his chest.

"Yeah," agreed Doc. He absently wished Dogmeat had a paper cut or headache he could treat. "What about you, Loverboy?"

"I say we stay right here, and don't take that god forsaken hill." His tone was matter-of-fact and his skin's complexion was fabulous. "In fact, let's put it to a vote. Who wants to stay right here?"

"You ain't puttin' it to a vote," growled Sarge, his eyelids squinting so hard that they prolapsed a little bit. "This is war, not a democracy."

"I see your point," Loverboy replied with a thoughtful nod. "Okay, let's put it to a vote. Who wants this to be a democracy? Show of hands, everyone."

Loverboy, Doc, and Radio Guy all raised their hands.

"And who votes against this democracy?"

As expected, Sarge raised his hand. The only no-vote was Dogmeat.

"What about you?" asked Doc. "I suppose it's difficult to raise your hand in your condition, but where do you fall?"

"I guess..." began Dogmeat as a distant violin played its sad song, "I guess I shouldn't have... lied to the recruiter. I'm only fifteen. Only fifteen and already at my end! I think I see... a light..."

"Okay, fine," said Sarge. He was angry, but deep down he knew that the people's voice had spoken. "Democracy it is. Now can we vote to take that damn hill?"

"Woah woah," said Radio Guy. "Not so fast! Before we convene on any votes we have to establish our constitution, build a basic infrastructure, and hold elections. We can't just vote nilly-willy like cavemen!"

And so they began their work. While Radio Guy and Doc collaborated on the exact framing of the constitution over the following two years, the other men set up housing, roadways, and utilities in the trench. Upon the signing of the constitution in 1946, Loverboy and Dogmeat stated their intentions to run for the presidential office. They worked the campaign trail hard for eight months, shaking the other three men's hands nearly every day. The race was a dead heat. Loverboy had charm to spare and almost everyone knew who he was, while Dogmeat ran on the "Please... give this letter to... my girl. Tell her I'll be looking... down on her from Heaven" platform, which was very appealing even if the fountain of blood spraying from his chest was a little flashy and over the top for most voters. 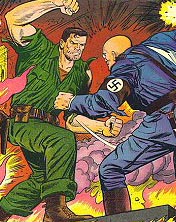 In the end, Loverboy won the general election in a landslide after employing cheap tactics, pointing to Dogmeat's health as a risk for their fledgling democracy. It turned out that Dogmeat was deathly allergic to peanuts, and while there were no peanuts to be found within the borders of their trench, this potential problem scared off his supporters.

In the spring of 1949 congress convened for the first time and immediately began their 51 week vacation. Upon reconvening in 1950, they finally voted on the issue of taking the hill across from the trench. The result was unanimously in favor of the action, with the caveat that each congressman would change his mind and be against it if the battle went badly.

"You know, I'm actually looking forward to this," said congressman Doc as he geared up.

Congressman Sarge smiled in front of his men for the first time.

"Feels good, don't it? The anticipation, not knowing how things will play out. It's scary but it makes you feel alive."

"I've never..." agreed Dogmeat from his stretcher, "seen the... ocean. I wish I could... have seen the ocean just once."

With that the men nodded to one another and crested the trench, screaming as they began their mad dash toward the hill they had been ordered to take six years earlier. What they saw stopped them in their tracks.

The scene before them was entirely different than it had been before. While Sarge's men spent all those years establishing their democracy in the trench, the world had moved on. They were relics of the past.

The German soldiers before them were now fifteen feet tall, and their tank had a new paint job with flames on the front and everything.