Lowtax is gone so make fun of him!

While Lowtax is Away… 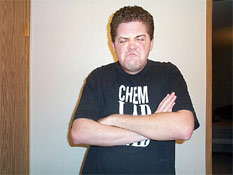 Lowtax will likely be angry when he reads this update while on vacation.Good news! Rich has left sunny Seattle for parts unknown, where he no doubt plans on scoring large quantities of illegal firearms, working as a mule for Colombian drug runners, and possibly posing as a woman in a transsexual prostitution ring. He told me before he left, "Zack, I want you to take care of things at Something Awful while I'm gone, and whatever you do, do not write a fucking article about me." In case you haven't noticed, doing exactly what he tells me not to or otherwise pissing him off is one of my greatest joys in life. Today on Something Awful I will be providing you all with a biography of the esteemed Mr. Kyanka.

To the best of my knowledge Rich "Lowtax" Kyanka was born something like twenty-five years ago, maybe twenty-four, I don't pay attention to detail. His mother Reinhardt and his father Lorber raised him as they toured the nation performing their vaudevillian routine. Reinhardt and Lorber were two well-respected entertainers in the field of nonsensical racist comedy and several of their acts are considered to be classics.

Reinhardt: One of these days Lorber I swear you are going to turn into a negro!

Lorber: Why a negro? Why not a Ching-Chong-Chinaman?!

Reinhardt: Because you think chop-suey is a pig's name!

They refined their act, but at the cost of young Rich's education. He was receiving training from a hook-handed Spaniard for his speech impediment and a wailing pin-head from a team of circus-performers that traveled with his parents taught him the intricacies of mathematics. It was only natural that an environment like this would cause a lot of turmoil in Rich's life, which lead to his higher education in engineering and later his obsession with video games. 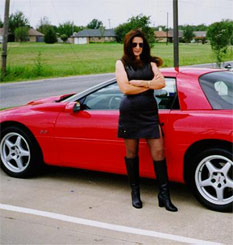 You can't see it, but the whole car is covered with Backstreet Boys stickers. Also, yes, that's Lowtax.Fresh faced and bright-eyed Rich left college with a degree and headed off to sunny California to work for Game something or Voodoo something, I don't know. It was there he encountered his childhood nemesis Kevin Bowen. Their love/hate relationship began with an accident, when Rich slammed his hillbilly red Camaro into the side of Frag's Lexus. A yelling match began; a yelling match that ended with a hug and an exchange of phone numbers.

While employed at Game Extreme, Rich began to work with music, composing 500 hour long industrial tracks that came to him in his opium trances. Rich developed a musical theory that coupled the repetition of Phillip Glass with the sound of throwing a hammer at a bass drum, and he wowed the 13 year old mod musician scene! After taking the 13 year olds by storm, Rich began to consider developing a web site to showcase his musical talents. Thus, Something Awful was born, and Rich spent long hours experimenting with various techniques to evoke feelings from the audience other than boredom. With his "Chain thrown at wall seventy times" CD he managed to stimulate listeners to "annoyed boredom" and "shocking boredom", but his apex came after the release of the "Bleeping Casio set to Rumba Rhythm while smashing eggs with a Tonka truck" single. Audiences were stunned bored.

Eventually Rich abandoned these techniques and I can't really make fun of his music too much these days, but only because I think he would cry if I did. He moved on to developing games in Flash, which everyone knows is not a real gaming platform. While other people were putting out games like "Deus Ex" and "Mario Kart Hat Painting", Rich was slaving away in Flash to create his first masterpiece "Ghost Butler".

During recent snooping around on the SA server I managed to turn up his development document for "Ghost Butler". It provides incredible insight into the man's psyche, so I felt I should post it here.

Description: Okay, I'm going to make this game called "Ghost Butler" and you're going to be this big Vietnam Vet named Cliff Blast'em sent back in time to 1920 to solve the mystery of the Ghost Butler. What did the Ghost Butler do? I don't know yet, it's so mysterious that I haven't figured it out. There will be a lot of shooting and explosions and I think the Butler will live in a castle with zombies. It will be so bad ass.

Platform: I'm going to make it in 3D. UPDATE! Okay, I tried and that is hard stuff, woah mamma! I am making it in Flash now.

Game Play: You start the game with a knife and you have to sneak into the kitchen of the castle and steal a machine gun by stabbing the crates. Then when you get the machinegun you can run totally amok. That is how awesome this is because you can just go anywhere you want in the castle. UPDATE! Flash won't let me make it so you can go backwards so you can go anywhere in the castle still but only once. SECOND UPDATE! I can't get the machinegun to work so you just have to use the knife through the whole game, I will work on the grenades. UPDATE! Nope on the grenades.

Graphics: I am spending a lot of time to make the explosions and zombies as real looking as possible. The last boss is of course the Ghost Butler which you fight when you solve his mystery. One really incredible feature I want to work in is that when you kill the Ghost Butler it starts to say "CONGRATULATIONS CLIFF" and then it stops and a bigger Ghost Butler busts out of the Ghost Butler's corpse and you have to fight it. UPDATE! I just looked it up and Ghosts don't leave corpses when you kill them, so I am going to have it turn into a gem then it explodes really cool and turns into the super Ghost Butler.

Sound: I will mix in some really creepy ghost sound effects with some techno tracks I made. UPDATE! I couldn't find my record of "HALLOWEEN SOUNDS" so I just mixed in Christmas songs. It's still awesome.

Ghost Butler was released to rave reviews, but not the rave reviews Rich had been expecting. He had intended it as an earnest and quality game, but it came across as an insider parodying and aping the trends of gaming with sarcastic venom. Rich realized that he could ride this wave of humor and his future games and work for Something Awful focused on the lighter side of gaming. Soon after I came along and saved everything from falling apart and single handedly made the site the quality humor publication it is today.

Sometimes at night I cry because I'm a horrible failure. For those weekday readers out there, be sure to check in Monday, when Something Awful announces an exciting new contest that pits us against our mortal enemy (no, not Derek Smart).

Frags and the SA Forums have brought us another exciting installment of Photoshop Phriday! Wake up the kids, because it's time to take a look at some children's books Something Awful style! 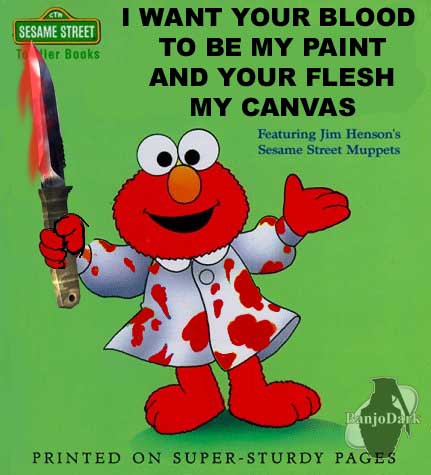 Now this is what I call a family affair! Check it out!