Hundreds of movies were released in 2001, but I believe one organization in particular deserves special recognition. After conducting a rigorous nomination and voting process which consisted of myself eating barbecue potato chips and staring directly into a bare 70-watt light bulb for hours, I have the honor and privilege of presenting the "Something Awful Movie Studio of The Year" award to 20th Century Fox. So how did Fox beat out all the other fine movie studios, such as New Line Cinema and Sony Pictures Classics? I'll answer that question just as soon as regain my vision and can see what the hell I'm typing. Oh yeah, Fox won because of their dedication to producing and distributing high-quality, original, and laugh-out-loud hilarious feature films. Examples include: 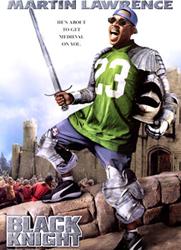 This is an actual poster for an actual movie released by Fox in the year 2001. Think about this for a second and you'll realize why so many people want to blow up America.

"Black Knight" - Jamal Sky Walker (Martin Lawrence) goes back in time to medieval England to make fun of the white people's funny accents before showing them how to get funky on the dance floor. Seriously.

"Dr. Dolittle 2" - Eddie Murphy teaches various animals how to shit in toilets and have sex. You know, for kids!

"Freddy Got Fingered" - Tom Green jacks off slimy horse cock six minutes into the movie and screams, "Look at me daddy! I'm a farmer!" (previously reviewed)

"Glitter" - Mariah Carey was so pleased with her acting debut that she attempted to kill herself and checked into rehab shortly before the premiere. Now that's showbiz!

"Monkeybone" - You would think teaming up Chris Kattan and Whoopi Goldberg in the same film would result in multiple Oscar nominations, but "Monkeybone" didn't even manage to make $6 million domestically. That kind of money isn't bad for an art house film about injustice directed by lesbians, but "Monkeybone" cost $75 million to make. I think they lost money.

"Planet of The Apes" - Tim Burton and Marky Mark remake a movie from the 60's because, as we all know, all films made before 1980 aren't worth watching. Especially the grayscale ones!

"Say it Isn't So" - Heather Graham and that guy who always plays the dumb jock fall in love, but they soon discover that they may be siblings. It turns out that they're not, but along the way somebody puts their hand up a cow's ass and there's lots of jokes about disabled people.

Quite the collection of cinematic classics, if you ask me! And this is coming off a banner year in 2000 which featured the release of timeless treasures such as "Big Momma's House," "Dude Where's My Car," and "Me, Myself, and Irene." Congratulations, guys! These are all really great works of art and I'm not being sarcastic at all! This is a respectable web site! On the Internet!

While making fun of some of Fox's less fortunate 2001 releases is a great way for me to fill up the required amount of space I'm supposed to write, it's not particularly interesting. So I thought it'd be more fun to take a look at some of Fox's more noteworthy year 2011 releases, all of which I've managed to screen already due to my recent status upgrade to "Hollywood Insider," which I received after beating three orcs to death in the enchanted forest of Karla-Zeela with a +3 sock. That's right, the movies the public won't even know about for nearly a decade have already been made. Everything is done in advance in Hollywood, you know. Why, Britney Spears is pushing 30 and popping out her fourth kid as we speak! You guys have been staring at photographs and virtual holograms of Britney taken years and years ago, since marketing people needed time to airbrush her videos and sonically engineer her voice to a listenable level.

Anyway, here are some of my favorite films from 20th Century Fox's 2011 lineup. Keep in mind that Fox will continue to innovate the art of comedy by further pushing the boundaries of good taste and good sense: they won't stop with Tom Green jacking off horses, no sir!

Comical L. Nigger (Martin Lawrence) and Hip-Hop Horace (rapper Crackah Killah) star in this raucous family comedy based on the hit Nickelodeon series. Comical gets a job at a day care center in order to help burn off the hundreds of accumulated community service hours he was given for "accidentally" raping five middle-school cheerleaders and then killing his wife for forgetting to hit the record button on the camcorder which Comical planned to use to tape the action and sell to child pornographers to pay off his gambling debts. But the only thing Hip-Hop Horace wants to "burn off" is some righteous weed! With Horace's help, Comical teaches the children of the day-care center how to smoke pot responsibly, huff paint thinner instead of turpentine, and not use cocaine until you're at least nine years old and use the buddy system. Along the way, Comical learns to love again with the help of a 14-year old Popeye's Chicken prostitute he affectingly nicknames, "smutty bitch crack ho whore." For some reason, reinforcing negative racial stereotypes is still considered as funny in 2011 as it is today.

Eddie Murphy dons a variety of fat suits to play all fifteen members of a rural, overweight family of hard-working farmers. When the Chubby family mistakenly eats their entire harvest in one night, they must find a way to raise enough money to save the ranch from evil land developers. Thankfully, there's a farting contest at the state fair with a grand prize of $10 million dollars. So the entire Chubby family enters the contest and competes against representatives from the whole animal kingdom in a variety of events to test distance, strength, and overall style. SPOILER: In the end, the Chubby family wins the prize in the final event when Plumpy Chubby mistakenly eats the previous year's champion - an armadillo - and later shits it out into the evil land developer's mouth. 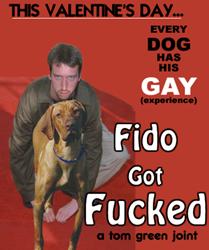 Movie posters from the year 2011 look really crappy and have some of the stupidest marketing slogans imaginable. The reasoning behind this? My theory is that the human race will have de-evolved by then, and lower levels of intelligence must be used to communicate. Incidentally, Something Awful becomes Fortune 500 company by 2011.

Tom Green returns to writing and directing in this "spiritual successor" to his 00's hit. Chet (Tom Green) lives at home, works at a zoo, and has a grand old time molesting and graphically sucking off all kinds of animals. But he has the nagging sense that something is missing in his life. Soon he meets Steffi (Hallie Kate Eisenberg, the girl from the Pepsi commercials), a multi-gendered blind girl with Down's syndrome. They soon fall in love and while Chet enjoys having the "best of both worlds" with Steffi's dual set of perfectly working male/female genitals, he finds himself mysteriously drawn to Steffi's seeing eye-dog, Fido. Then one day he walks in on Fido and Chet's father Abe (Dean Cain) having sex in a carport, so he plots his revenge by raping Fido violently and then forcing Steffi to rape his dad while Chet toungues the hole in his father's stoma. Chet is declared a hero, named president of the zoo, and teaches Steffi all about the pleasures one can give and receive from wildlife and reptiles alike.

"Sing For Your Sucker"

"Moulin Rogue" director Baz Luhrmann presents yet another lavishly produced, yet completely insane and historically inaccurate musical. During the Spanish conquest of South and Central America, early-80's hip-hop rapping Aztecs must use their power of rhyme and Run DMC to destroy the skateboarding, mid-90's punk rockin' army of Hernando Cortes. In the end, the Aztec empire falls but we all learn about love.

It's a remake of "Braveheart" with Colin Hanks in the Mel Gibson role. I don't get it either.

"Not So Virgin Mary"

Just another one of those typical run-of-the-mill religious and incest-themed romantic comedies that are so popular in 10's. When Mike Samson (Haley Joel Osment) is caught screwing his big sister in the middle of his father's church sermon, he's sent away to live his father's divorced husband, Jerry. But when Mike's secret biological mother catches wind of the situation, she decides to take advantage of Mike's emotional distress by planning a "family reunion" of the sexy sort! While Mike and his secret biological mother share a brief fling, it dawns on him that his big sister Mary is his true love. So he devises a clever scheme to win back his sister's heart and stop her from marrying their charming first cousin and uncle, Stiupom. Blah blah blah, more stuff happens, Mike uses the old, "Jesus said 'love your brother,' so let's do it right now in front of dad" line and they all live happily ever after they murder a disabled person during their honeymoon. Directed by the Farrelly Brothers, not surprisingly.

As you can see, 20th Century Fox has plenty of awesome titles and big wholesome laughs lined up for the next decade, so you better stay alive so you can see them yourself! Remember, when it comes to movies, newer is automatically better! It's just like food. You wouldn't want to eat food from the 30's would you? WOULD YOU!?

That's right, the 2011 Grammy award-winning Semi Automatic Turban has whipped up another batch of scrumptious sonic sausages for your musical merriment. Here's the email they sent me:

Greetings from a land not pockmarked from an AMERICAN bomb because are of homeland is of peace and not of a terrorist pocket? Only we of know the answer and we all know the answer is are love AMERICAN we live here ofselves for AMERICAN goals and successes in music industry and past. We have share something with many fans who say we are on tour but we on not tour yet of course because of lack of a soccer stadium concert. It is very effiecent to state an execution in a same stadium of a concert and we wish always effieceient so we need to have both on same time and also for our collectibility of those who not of listen of the not laws. Here is are two song for enjoys!

Children Turn On Mint - Once a children and dreams escaped and overran homeland mint of money in high style. There were many dead mint workers but a children and dreams were left to run the mint factory! While the coins were produced an ghosts of past money was released? Childrens however have powers that substitute and once the machines were powered souls were processes into what we today call a peso. Do not worry this song is story so it is like of there only not of money making. There is free quarter! This is technicl.

Wacky Worktrench - Life in a homeland is not a type of computers for thousand dollar spectacle but rather an old and shovel of a ditch. When there is a shovel in a ditch of job we always accept because we make a work trench into one of wacky and very fun for all except for those who dispose of evidence as we solve the crimes. There are 25 hours days for those who work we merely supervise and say the threat to keep job on time. We have made thousands through work trench but you never will or at least survive to tell.

This is the end be sure of high praises as always and hit #1 of any include a hobbit!

I don't care much for "Wacky Worktrench," but "Children Turn On Mint" is quite… interesting! I recommend listening to it if you don't mind going deaf. Or if you already are.