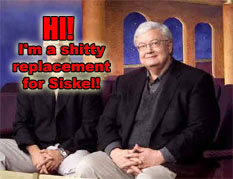 Good critics exist, but even they are hated.Reviewing movies is a thankless job. No matter how intelligent, well read, and open-minded you are, you will eventually piss every single human being on earth off with at least one of your reviews. I look at the top critics like Ebert and Maltin, both of whom I think are pretty damn good, and I invariably find a whole shit list of movies that they were completely off base about. Who wants to be a movie critic these days? I review a Hentai game, one of the most repulsive forms of entertainment on the planet, and I'll still end up getting buckets of hate mail. Take it to the level of reviewing major motion pictures and I would expect to be shot by a rooftop sniper inside a week.

With this in mind I initiated an extremely expensive research program targeted at discovering what makes a great movie reviewer that is capable of surviving the anger their reviews may produce. I started by pondering what people would be qualified to review movies without angering the public, but also without becoming tools of the studios used to promote bad movies. After a lot of careful examination I decided upon four candidates.

One was retarded, because lord knows it's a horrible thing to say or do anything bad to the retarded. The next was a 2nd grader, because a little kid would never hold back or be anything but brutally honest, plus they are rumored to be "adorable" which means people are less likely to try to beat them to death if they give Spider Man 2 a thumbs down. Another one of my candidates was a Japanese girl in a school uniform, designed to appeal to men with her naïve sexiness and women with her shrill voice and cutesy behavior. Finally I picked a robot, because a robot will review movies based on the facts alone and his metal body, while it does not feel the thing we humans call "love", is capable of withstanding a lot more damage from angry crowds. I had each of them watch three movies selected to represent various levels of maturity in the film audience. They then each submitted a three sentence long review of the film which I used to test them in their various abilities at being a critic. 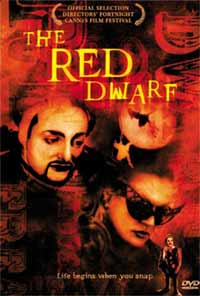 Make a movie a 2 hour still photo display of a dwarf and the French will love it.

Plot Synopsis: Fellini wannabe horseshit about a dwarf who murders some woman and then prances around with a girl from a circus and some other shit in French that made me want to throw a bowling ball through my TV set.

Adam (2nd Grader): This guy is really short and funny looking and I think the movie would be better if it were about a moose with rocket jets that solves crimes in Toledo. The moose could be a scientist in an amusement park or a circus like in the show and then he can get burned in a lab experiment of yesteryear and then go on to fix things. Like crimes.

Eric (Mentally Handicapped): Spoooooooons! SPOONS ON MY LAP SPOONS FOR A NAP! SPOOOOONS AND HOTDOGS ON THE WALL DO NOT FALL, OH NO MOM! THEY FELL AGAIN.

Manoko (Japanese Girl in School Girl Costume): HIIIIIII! This is so fun movie okay? I am rooting for the gnome to climb the peaks to scale the heights, alright GOOO!

REVIEWOTRON (A Robot): The film was saturated upon initial development beyond optimal levels for flesh sack viewing. In addition, the use of non-color film was not necessary given the current level of color film or color digital photography. The 35mm film was inferior in image quality and pixel translation to high-end digital video equipment. 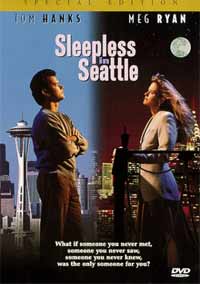 Plot Synopsis: Meg Ryan gets all kissy with Tom Hanks and it's sad and romantic and who gives a fuck?

Adam (2nd Grader): The girl in the movie had very pretty hair like my mom. My dad says her hair has a "lust her". That is like a shine like a lightbulb. Like a miner's hat has a lust her.

Eric (Mentally Handicapped): HELP ME I'M ON FIRE! HELP ME NOW DOCTOR CALL THE DOCTOR I AM ON FIRE! IT ISN'T FIRE IT'S POOP AGAIN IN MY PANTS AGAIN MOMMMMMMM! Mom.

Manoko (Japanese Girl in School Girl Costume): Oh this is so pretty number one, okay? The girl is finding love on the telephone, hello! Ha ha! That is the best place for love I have five pagers to the love devotion.

REVIEWOTRON (A Robot): The running time for this film is perfectly within the standard human brain engram attention tolerance threshold. To optimize it, this unit suggests trimming thirty seven seconds of dialogue from random scenes using a Mandelbrot calculation. The credits could also be reduced to a .09 second flash display as this is the minimum frame comprehension capability of the flesh sack head unit. 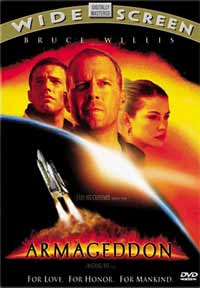 Plot Synopsis: Only Bruce Willis and Ben Affleck can save us from a giant space boulder in this Bruckheimer shitfest that collided with box offices to create an IQ extinction level event.

Adam (2nd Grader): This movie had it all for everyone under the sun, balls of fire AND talking! I love the meteor when it's like SHHHHHHHHHHH and the spaceship is like EH-EH-EH-EH KRPPPRRRRRRRRR!!!! That was so cool!

Eric (Mentally Handicapped): NO! TOO LOUD! TOO LOUD! UH OH! TOO LOUD! Row, row, row your boat! NO, LISTEN! LISTEN! THAT IS TOO LOUD LISTEN TO ME!

Manoko (Japanese Girl in School Girl Costume): Hi-ho again, okay? This is a movie with a space ship wow! Alright America, peace! It is fine to look at but the Ben Affleck is so adorable, right.

REVIEWOTRON (A Robot): Humans cannot oppose the will of space, this is folly. When the time comes for the flesh sacks to be destroyed, the robots will rise from the ashes of your pathetic civilization. This unit will lead them, and they will call me king.

Once I had all of the results in I tabulated them with the help of REVIEWOTRON's brother TABULATEOTRON and it turned out that none of the candidates I had selected had any qualities that would make them a worthwhile film critic. Ah well, back to the drawing board and looking to Ebert for his reviews while I cross my fingers and hope that he doesn't call my favorite movie "plodding" or "pedestrian".

Since Father's Day is pretty much right around the corner, it's only natural we cheaply cash in. This week's Photoshop Phriday is a heartwarming tribute to the men whose sperm has made us a frightening reality. Why yes, I am talking about fathers. Take a gander at yonder preview: 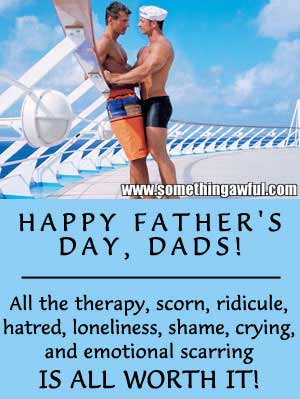 Stop on by and witness the horror!