Make a wish, buy a dish

The Make a Selfish Wish Foundation 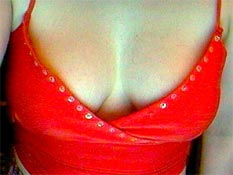 I respect you for your brains and depth of character.Personal web sites are nothing new. The Internet was basically founded on the idea that anyone with a computer and access to the Internet could generate their own crappy vanity project. Everyone has a voice! As we've pointed out time and time again on Something Awful with the Awful Link of the Day it would be nice if many of these people suddenly became mute. Over time "Jim Bob's Home Page" evolved into "The House of Badass Jimbo". James fancied himself a writer, much like I fancy my stupid shit writing, and began to pour his heart and soul into keeping some horrifying banal web journal of every single action he took throughout the course of a day. Then he decided to throw in a bunch of stupid pictures he found while searching the internet late at night and the collection of porn he downloaded from AOL. Add a couple video clips of dead people and / or animals and you've strayed away from the home page and landed squarely in Everything / Nothing land.

After a while the thriving E/N community developed a weird symbiotic relationship with a group of mostly teenage girls who posed on web cams and kept equally lame web journals. Collectively they became known as "cam girls". They would flash their underoos or bare skin and strike vapidly seductive poses and the male readers and web masters of the E/N community would heap adulation upon them. Taking to the moral high ground of exotic dancers everywhere, these photogenic jailbait girls realized they could actually get things they wanted by staring at an object three inches to the left of a camera and looking sad. Thus, with the help of Amazon.com, the cam girl wish list was born and the world would never be the same again. 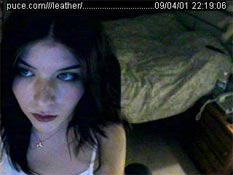 Stop looking over there! What is it, a ghost? Tell me, please! I will buy you a silver ankh necklace if you tell me.Now they can simply go to Amazon.com and pick out the things they want, completely removing the "not what I wanted" part of the "receiving gifts from creepy older men" equation. Cam Girl wish lists usually consist of the following:

You can chide these enterprising young women all you want for being selfish, for expecting men to give them gifts, for selling their flesh and soul to petty consumerism, but you would be making a mistake. These girls aren't stupid for doing all this. They've latched onto the idea that pornography is the single feasible means for generating revenue on the Internet. They have turned their fortunate DNA into an endless treasure chest of fabulous prizes. The drooling, hunched, perpetually horny masses have simply walked directly into their Bambi-eyed machinegun fire and as surely as if they had been beaten to death in River City Ransom, they leave behind spinning silver coins. 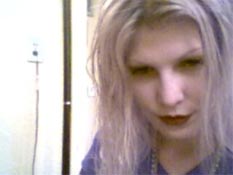 It moved! What's it doing down there now?! It IS a ghost, isn't it? TELL ME DAMN YOU!Like the misguided younger brother on a family-friendly sitcom, I am constantly cooking up lame-brained schemes for Something Awful to rake in money. Usually Rich just shakes his head with a knowing smirk and shoves me back into the textile mill where I continue working on merchandise for his "Fat Sally" line of parachute pants. The reason for this is mostly because he regards me as a nearly-mongoloid slow wit with motor skills barely up to speed to operate an 8 ring cloth lathe and the financial savvy to match. Then it hit me as surely as the cruel lash he made me cut from the thorn bush, this isn't my idea, I'm just ripping off the idea of teenage girls! We should all do wish lists and bask in the glow of our new fabulous wealth.

Rich told me to get back to work like he normally does, so when I went home last night I called up some of the others about it. Jeff K was grounded from the Internet because he somehow caught his computer on fire when he was playing with his MUSCLE men. Leonard J. Crabs just laughed at me and hung up, then an hour later a dark sedan drove past my apartment and someone threw a brick through my window with a note reading "Fat chance sailor!" attached to it. I took this as a "no". My hands quivering I dialed up Cliff Yablonski. I must have caught him just before he passed out in a drunken stupor because he bordered on agreeable, saying he would go so far as to tell me all about exactly what I was supposed to give him from the Internet. Then I heard screaming and he hung up, but he did send me what he promised. To keep the estrogen level balanced with Cliff's raging testosterone I drafted SA Forums admin "Fistgrrl" into providing me with her Amazon.com wish list as well. Naturally, Fragmaster wanted in on the action as well, because he knows where the actions is in this town.

"I decided to keep things pretty straightforward with my wish list. When choosing I went for the basics for personal entertainment, personal enlightenment, and home and garden. Please buy me a goddamned bird bath; the birds around here are outlandishly filthy."

I think those birds have Anthrax on them!

"Hello I am Fragmaster and in AOL Chat rooms I am a really hot female 18/f/SoCal who is also a model and GO GO RAIDERS fan or some shit but in reality I'm an ugly mishaped nerd who does Fireman Comics and bad Flash and weekend updates on SomethingAwful so buy me gifts SO I WIN PRIZE OK????? OK?? *SIGH*"

"I do all this fucking work for Rich and Zack on the forums and I don't get paid a fucking cock sucking cunt faced dollar. Those sons of bitches are the worst people I know and if it weren't for the joy I get out of tormenting the dick brained shit crawlers on the forums I would pull up stakes and leave for Somewherethefuckelseville, USA. Buy me something off my wish list you three toed bucket of lard and guts or I will send that pipe-hittin' old bastard Yablonski over to give you a colonoscopy with a weed eater."

Fucking buy me something already.

"What the hell is this crap? You ungrateful beady-eyed assholes had better send me some money on this thing. Use that pay person shit, whatever that Kyanka guy uses. I don't trust him, he's got the shifty eyes too and one of these days I am going to make his brains fall out of his goddamned head. What's in the river? I don't want any fucking fish I broke my freezer storing leaky car batteries I stole out of Dale Patterson's garage and I've got no place to put a bunch of fucking fish."

arget="_blank"what the fuck is this gibberish shit

This is the one. This is the plan that is finally going to pay off for all of us here at Something Awful! Here come the gold! Big money! I'm going to be able to build a mountain out of hundred dollar bills and pay midget women to grease me up so that I can glide effortlessly down my enormous cash mountain.No. It won't work. My life is a lie.

There's a Party in My Monster and Every...I screwed that up.

The Rom Pit makes a triumphant return! This time arch-kook Lowtax takes a look at "Monster Party", which is without a doubt one of the most batshit insane games ever released on the Nintendo. Don't believe me? Experience the terror of Monster Party!

This is what makes "Monster Party" so special to me; try naming another game where you have to fight BOTH dancing onion rings AND a set of walking pants. Without going into Turbografix-16 titles, you simply cannot do it. There is probably a good reason for this, but I can't think of it offhand.

It's a haunted fun time and everyone is invited to a Monster Party! I would go, but honestly I'm afraid of that giant kitten thing, and that's just the tip of the Monster Party iceberg.