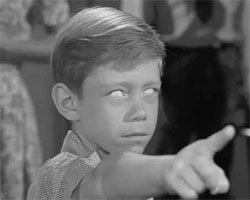 Ever since that ominous child arrived in town, things have been rotten to the core, Mr. Mayor. I don't care for that little brat pointing and laughing at my neighbors. Every time he does it one of them keels over. Just yesterday he came and pointed and laughed at Mr. Johnson. A few minutes later Mr. Johnson was on the ground, having suffered a heart attack. And what's worse, Mr. Johnson defecated in his pants during the episode. I guess it's a small blessing he didn't wake up to face the shame of such an accident. That little whelp has no idea what's really funny.

Lock him up and throw away the key!

The ominous child came out of nowhere yesterday and pointed at my mailman as he was heading towards my mailbox. He died before he could stuff those letters in my box. I'll have you know interfering with the delivery of mail is a federal offense.

I'm giving you three more weeks to take care of this ominous child problem. After that, I'm calling the Postmaster General and he won't be happy to hear from me again.

Mr. Mayor, say the word and I will give that ominous child a spanking he won't soon forget. When my large, firm hand cracks across his ornery bare buttocks, I'll be the one laughing. Just let me at him, Mr. Mayor. And if there are any other children that need a spanking, I'm your man.

The city already has my contact info on file if you need to get in touch.

If I find out this Ominous Child is here because you did something stupid on vacation again, you've lost my vote. What is it this time? Is it like the paper said -- that you dug up a bunch of child graves? Shouldn't you be thinking about things like restoring this town to greatness and not grave robbing? Our last mayor, God rest his soul, really tried to tackle the issues. If he hadn't died so mysteriously during the election, I have no doubt you would have never made it to office.

It's up to you to give this Ominous Child a stern talking to. Tell him it's not polite to point and laugh at people, especially if doing so causes them to die. Re-open the juvie center and put him in there.

Larry Custer here. I saw the ominous child and he saw me. He raised his finger at me, then he laughed. I'm a goner for sure. He's taken control of my mind, so I'm going to go ahead and start shooting and robbing folks, and I'm going to do it all without any pants on. It's not me, Mr. Mayor. It's the horrible thing controlling me. So tell your police and the like not to interfere or try and stop me.

Let me first say the answer to the problem with the Ominous Child is not to put him in juvenile detention or let him slip through the cracks of the system. We need comprehensive reform of the juvenile system in this town, as indicated by last week's discovery of all those little skeletons. Children crave discipline, and will act out if they don't get it. The Ominous Child is crying out for attention and parental authority figures, not persecution.

First of all, thank you for your time. I appreciate it. Second, I am not proud to admit this, but in Vietnam I killed a lot of children. If it's a lack of nerve that's keeping you from dealing with this demonic child, I have enough for the both of us. I'll do what needs to be done. Just give me a large flamethrower and plenty of space to do what I do best. It won't be like the last time either. I've got new glasses.

As I write this I am still mourning my dear sweet wife, who dropped dead after a rude child approached us as we left the movie cinema, having just been taken to the absolute height of ecstasy watching the 21 Jump Street remake. The child pointed at her with his ghastly little hand, then began laughing. Before I knew it she was blasting popcorn out of every orifice and collapsing on the sidewalk. I do not agree with doctors that she suffered a severe reaction to the movie. It was that kid. Everyone in town knows that kid is killing people. Please hang that child in town square so we can all point and laugh as he dies.

Wow! We here at the Mayor's Office are always delighted to hear from active members of the community. Your strong opinions are welcome here. In fact, we believe they make this town great!

In regards to the recent problems posed by a certain laughing child, we believe any subsequent deaths were entirely coincidental. It's very easy to get caught up in the hysteria, we understand. The simple truth is no child has the power to control death, even one that looks identical to the mayor's twin brother who died at a very young age under mysterious circumstances.

Rumors about the mayor relapsing into his old addiction of grave robbing are entirely false. He has been sober for several years now, and has long since returned any stolen idols, talismans, crystal skulls, regular skulls and charms. More than likely this is a truant child who is only harming himself by not attending classes and getting a proper education.

The Mayor wishes to let all residents know that he is on top of this, but he is currently in the midst of high-level Sister City negotiations in Marrakesh. In the meantime, please avoid the child so as not to encourage his delinquent behavior.

Thank you so much,