Crazy wrestling gimmicks. While I haven't watched wrestling in over a decade I have countless memories of crazy shit going down in the ring, with people like Repo Man and IRS running around performing their "jobs" while kicking the shit out of people like Barry Horowitz. I also remember some dumbshit thing in the WWF where there was an egg and at Royal Rumble a big bird came out of it or something (?)

Wrestling games. If my page designs haven't shown this already I have the artistic eye of a houseplant. As such, when I played wrestling games as a child my goal was simple: to make the stupidest fucking characters the game would allow. While my friends were out creating "xXxDaRkIdOlXxX" and finding the perfect finishing move to express the sorrow of the blackest graves of Hot Topic, I was out finding ways to make guys wear panties and sports bras. I spent countless hours going through the hundreds of "taunt" animations to find that gayest dances I could (I usually ended on the one where the guy walked around like a bear, then did a backflip and kicked himself in the balls).

My friend Damien once made the mother of all stupid characters: a dapper young gentleman named Dandy "Killer Mask" McGee. While none of us can remember exactly where Killer Mask came from, we managed to recreate him pretty faithfully on Wrestlemania 2000 the other day. 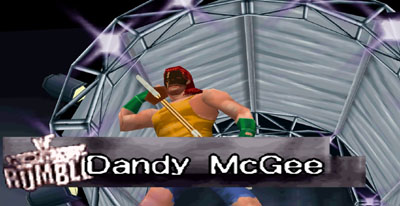 True to his name, that is one fucking killer mask Dandy is sporting. On top of that he has his trusty weapon, one of those sticks they use to fold up the newspapers at the library. And just look at that sweet yellow shirt. And I'm sure he's got that gay-ass dancing bear animation somewhere. He just wouldn't be the same without it, Dandy.

Here's to you, Dandy. I could have been out getting pussy if I weren't busy trying to find ways to make your finishing move that thing where you bounce off the ropes and make the other dude hit his nuts on the turnbuckle.

Thanks to SA Forums users Microwave, AxemManiac (who also drew this excellent picture of "the legume"), and Exilechamp for the artwork. I'm not paying them or anything but hopefully my abusive comments and general assholishness are enough compensation for the honor of drawing fake wrestlers for an Internet humor site.

Thorpe's plan to kill me by forcing me through "Las Vegas Blood Bath" didn't work, so next week we'll be looking at "Hairdo U" or maybe one of the movies from this six-film set I bought called "Serial Psychos". Pray for me.

I ran the first installment of Pregame Wrapup last week, and the response was great. I'd like to thank all of you who took the time to write in and tell me that you liked the update and that you'd love to see more sports-related stuff on SA. Lowtax, the nice guy that he is, greenlit it to be a biweekly feature so hopefully I can keep making jokes about the way various athletes look.

Next time we'll be having a reader mailbag section, so if you have any sports-related questions shoot me a line at pantsfish@somethingawful.com and I'll try to answer them.

That's pretty much it so I'll see you all in a few weeks! Keep writing in and I'll keep trying to respond.