The Monty Hall Problem refers to a thought experiment proposed by magazine columnist Marilyn vos Savant in her "Idiot Savant" column in Parade magazine in 1971. In the column, vos Savant mused that if there were three doors, one containing a prize, and two containing a goat each, one would have a 1 in 3 chance of selecting the door containing the prize. However, if, following the initial choice of door, a door that was NOT the selected door was opened to reveal a goat, and one was given the option of changing their selection or staying with their original choice, which option would have the better possibility of winning?

its the better option to switch

After reading vos Savant's Parade column, many readers became very angry, breaking windows, tipping cars and setting fires. One man screamed so loudly at his copy of Parade magazine that the paper changed from glossy to regular. 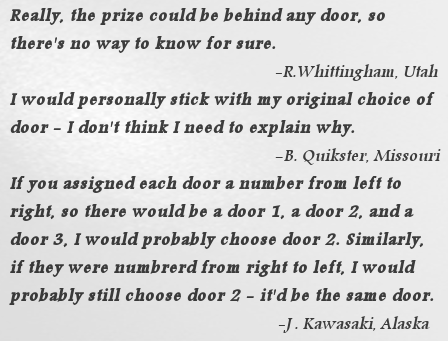 Criticism from the Scientific Community

Scientists have identified many problems with the Monty Hall Problem, including the fact that notions of "victory" are entirely dependent on one's own criteria for success, and that even after taking the best choice, there's still a chance you might lose. Some scientists have also criticised the Monty Hall problem after successfully solving it, and then being told that the prize was made up.

The earliest Monty Hall-like puzzle dates back to the sixteenth century. While the broader strokes of the problem were basically the same, the doors were all made out of wood and the prizes were much worse - usually some rotting meat or a tithe to the church asking to prevent a death during childbirth.

In the 1940s, BBC broadcaster Andrew Krumpus featured a recurring comedy segment with similarities to the Monty Hall Problem on his hour-long UK radio show, Andrew's show. The show would feature Andrew, as contestant on a game show, choosing the wrong door and failing to switch when given the option by an unnamed host. The host would then berate Andrew for his poor understanding of probability. The segment would end with a sincere out-of-character plea from Rick and the host to the viewers, telling them that critical thinking was the most valuable asset in the fight against the Jerries.

There are many possible origins for the term "Monty Hall Problem." One possible origin story is that there was a real-life person called Monty Hall who owned many doors and some goats, and he hated the goats. Another origin tale (possibly apocryphal) speaks of a real-life hall that is named monty and has a prize in it. Marilyn vos Savant has remained tight-lipped.

A variation of the Monty Hall Problem called Uncle Ersk's Funny Door Game is commonly played by children in some parts of Ukraine, with a rock or pine cone taking the place of the host.

Many elite mathematicians and powerful renaissance academics have solved the Monty Hall Problem so many times that they now find it a trivial challenge. To test their wits further, many of them spend their time devising updated, harder versions of the Monty Hall Problem, some of which contain up to 10,000 doors. 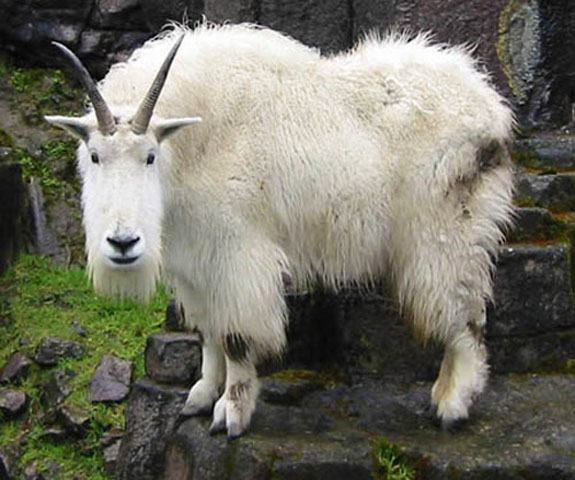 "There are three doors. Behind one? A terrible secret. Behind the other two? Your life will be changed forever..." -Movie Tagline

Two animated movies were made based on the Monty Hall Problem, one released in 1972 (entitled "The Monty Hall Problem" and one released in 1975 (entitled "The M2nty Hall Probl2m"). The movies revolve around a young boy - the titular Monty - and his trip to a magical factory after finding a golden ticket behind one of three doors. The films were widely critically panned, with reviewers citing inconsistent tone, sloppy animation, and wide deviations from source material. As of December 2014, the first film holds an aggregate rating of 23% [Rotten] on Rotten Tomatoes, while the second film holds a rating of N/A.

A video game adaptation entitled The Monty Hall Problem was released in 2002 for Nintendo's Game Boy Advance console. The player is challenged to pick one of three doors, behind one of which is a prize. The game was well received by critics at the time, although some[who?] were irked at the absence of a choice to switch upon door selection.