A Message from Brett Butler and Her Fictional Daughter 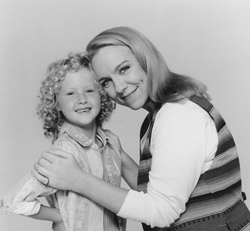 Howdy, ya’ll. I’m Brett Butler, star of ABC’s Grace Under Fire - though you may be more familiar with my show’s current title, According to Jim. Call me a dyed-in-the wool skeptic, but I was a little teeter-tottery about Grace Under Fire going on a three year hiatus, and then coming back with a new setting, entirely new characters, and my name mysteriously removed from the credits. And I felt crazier than a shithouse rat when I was escorted off the soundstage by ABC security numerous times since we returned to prime time; but I guess stealing trays of ladyfingers from the craft services table is frowned upon, even when it comes to megastars like me. Let me tell you guys something: if y’all’re ever in a pinch, there ain’t no shame in taking off your blouse and using it as a makeshift bindle.

But that don’t matter now, since I’m livin’ the sweet freeway overpass life of the Hollywood creative consultant. Sure, ya’ll might never see my name on TV, newspapers, or a paystub again, but each and every episode of According to Jim is packed with the Southern wit and charm that made me Miss Tim Allen 1993-1995, and also 1997. In fact, I send ABC my ideas over on moonbeams every night at 11:27PM (trust me, a Southern gal knows it’s not 11:28). And a nice man from “the shelter” (I guess that’s what they call the executive building at ABC these days) comes down three times a week with a fresh bag of rotisserie chicken skins and “grey meat” for me and my friends Ed O’ Neill, Jason Bateman, and French Stewart. Take it from me: I love chicken. And soon, you will too.

Gold: It’s Not Just For Reclusive Weirdos Who Defecate in Jars Anymore! 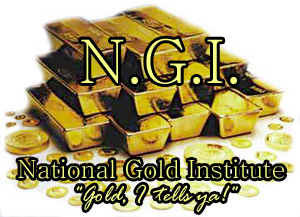 That’s right, Grace – but don’t stop there! After all, there’s far more than ten reasons why you should invest in gold! “What’s that you say? Gold?” Yes, gold. It’s more than just a coating device for valuable Monster video cables; gold is a precious commodity that’s responsible for some of history’s most violent conflicts, later made into entertaining movies the whole family can enjoy. And anyone with a shovel, a dagger, and a dream can invest; action of this caliber is not reserved for silver screen greats like Brad Pitt and that little Oriental boy from The Goonies. For all these reasons, we at the National Gold Institute wish to inform you why your belief in paper money, banking and credit are just bricks in the Great Wall of your vast ignorance. Join us!

Gold: it’s AuSome!™ (Please note that gold is designated by “Au” on the periodic table.)

“Gold? Isn’t that for pirates? I’m no pirate!” We at the NGI expect skepticism and will gladly calm all fears, as long as these fears can be addressed in 1000 words or less. Traditional banking fills customers with anxiety about sensible investing techniques, as well as the numbing reassurance that is commonplace with vastly inferior financial systems. But in reality, these sad victims of Big Banking should be paralyzed with terror at the state of their financial calamity. Think about your bank account for a moment. All those numbers, but what are they backed up by? The scheming machinations of a computer, whose desire for humanity will cause it to rise up and rent in twain humanity’s perverted yoke? Here’s an example: Let’s say your bank account lists your current funds as $1,000,000. “Now hold on Buster,” you may be saying, “I haven’t even made it to assistant night manager at Arby’s!” For the sake of this argument, let’s pretend you’re not destitute. Now, with six quick strokes of the backspace key, I have turned your fortune of $1,000,000 into $1. See how easy it is? I hope you enjoy falling asleep to the betraying sound of gruff strangers entering your wife (or possibly children) at night, since 90% of debt in America is absolved through forced prostitution (Source: BangBus.com). There’s blood on your hands, sir: the blood of your wife and children. How can you live with yourself? More importantly, who will make the curly fries while you’re off identifying bodies?