Hi there! Welcome to my store. Take your time, have a look around. I'll be at the counter if you need anything.

Why yes, I am that Nardo Pace. How did I go from being one of the most well-known engineers in the galaxy to running a small shop on the outskirts of Kessel? The Empire ran into a spot of trouble following Palpatine's death, and quite a few people had to be let go, including me. Thank you for your concern, but I'm quite alright. Better than ever, in fact!

When I was still employed by the Empire, I was lucky enough to travel to all sorts of unique locations and uncover ancient devices that inspired my work in unexpected ways. These strange contraptions had no immediate explanation for their workings or purposes, so I studied them to gain as much insight as I possibly could. Now, with this shop, I am able to share all that I have learned about these fascinating collectibles while selling them in order to import more devices in my neverending quest for knowledge.

Here I am, wasting your time with my prattling. Please forgive my self-indulgence. Is there anything I can help you with? Ah, that! You've got quite a keen eye for fine items. 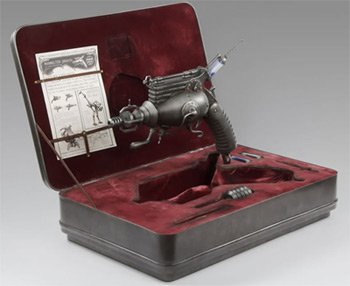 This is a carrying case for model guns. Note the fine craftsmanship, the attention to detail. The space-age velvet. By my estimate, in the last millennium nearly half of the civilized galaxy owned cases for model rayguns and laser guns, and three-fourths of those who owned model gun cases also owned model guns to go inside them. Unfortunately, the gun on display inside that particular case is in fact a model of one of those model guns.

A real gun? Sure, I've got a beauty over here. 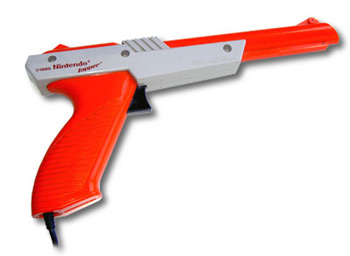 This is one of the first blasters ever created, still in mint condition. From what I can gather, it was designed to work with video game systems, the rudimentary ancestors of the holo-chess sets you're undoubtedly familiar with. When a player became frustrated at his performance in a game or felt the artificial intelligence was cheating, he would unsheath this handy blaster and vaporize the console with a single shot.

Note the power cord. Since plasma power cells had not yet been invented, this device would have been plugged into a generator the size of a bantha at all times. Why yes, I suppose it might have been plugged into an actual bantha, had there been some sort of pudu-to-power converter. I would be overjoyed to come across one of those!

All this talk about power reminds me of a curious item, on the shelf beyond this pile of clutter. It's quite an amazing - Oh, that? Surely you're not interested in that gigantic eyesore. 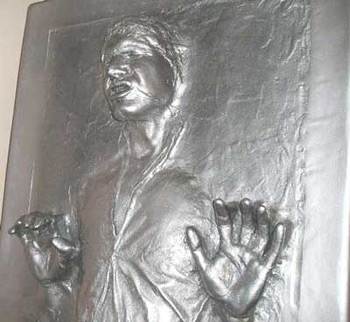 I'm afraid that's not for sale. It's a very recent acquisition for my personal collection, a replacement for one of my own personal designs that was ruined in the seedy lair of a Hutt. This piece came at a high cost and it holds a great deal of meaning to me, so I'm afraid that no sum you could offer would be adequate.