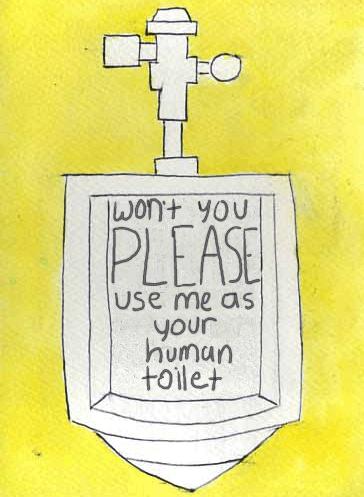 Building Diving and The Fort - Hey gang, check it out, an abandoned factory! I bet there's a mystery that needs solving in there! Scooby Doo: the original urbex explorer who inspired a generation.

Let me tell you about Bond. - Creator of Freakazoid, Mormon, and World's Greatest Dad 1997-1999 Mike Allred says it best: "People, especially roomates, have conflicts and drive each other crazy. But Bond is described as some kind of creature from a swamp."

Stories of a Shit Sucker - One day Dwayne was shootin at some food, when up from the ground come a bubbling crude. Turds, that is. Brown gold. Texas mud. Chock full of cellphones, necklaces, and corn.

Art and the Daemon: an adventure game. - Someone should do a choose your own adventure Fear Factor edition. Then maybe people will finally get bored of characters eating everything in their inventory.

Let's reminisce some of the worst products ever. - The glorious rewards of capitalism. And for fuck's sake, why do so many people put periods in their thread titles? Titles aren't sentences.

Fixing PostSecrets - This is how people make scrapbooks in hell.

lunchtime fyad - Badposter 'treebark' knows that every lunch thread in Fyad gets an average of 25 pages. Sorry, not this time. Go to a different forum, treeman.

Gary E Alien's "Rockin" Magick Vol 1 Ritual Geology: - In the future we'll use post-it notes with graey alien posts written on them as currency because they're JUST THAT GOOD. Even if you don't like reading about rocks you're sure to love this big ol' post about them.

/! :SIREN: /! NEW D&D PICTURE THREAD /! :SIREN: /! - Looks like the shut-in debate nerds in the politics posted their pictures. Now fyad has them. Shut the hell up about Iraq and Dick Cheney for a split second and watch us make fun of you.

magic: the gathering is my favorite forum - I didn't read this thread. It's all about some nerd comic book game and I'm too busy going on dates and scoring to read forums anymore. But check out this cat picture. If you're a loser digimon nerd (you probably are) you'll read this whole thread anyway.

Flyingsquid in the news GAWRSH - Flying-Squid was cursed to be a failure his entire life and everyone knows it but him and these idiots who hired him and put him in the newspaper.

FYAD Girl Talk - How do you know if you've found the right guy? - Secret Asian Man is WET BUTT's other account that he uses to try to get dates with every poster who has a picture of a girl in their profile. He gave me a bunch of his PS2 games not to tell anyone but now the secret is out.

lmao oh appman - Dans thought I would click a link to go into the Byob forum (fyad's enemy forum) just to read a badposter try to get saved from being banned from helldump (fyad's other enemy forum). I won't do it but I'm sure some of the geeks reading this will. 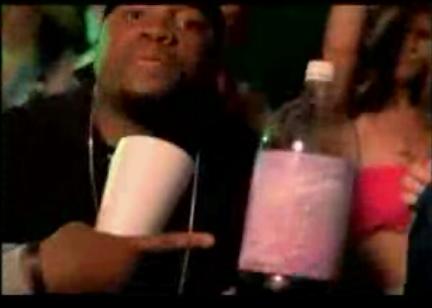 so my friend asked me to hack his gfs phone for him... - I'm sure you saw the Fox News story about cyberterrorists harassing people for lulz. This is the other side of the coin: a noble 'yobber dredging up hidden information to help out a dear friend. I'm thinking of donating some nuyen so he can afford a better deck and hopefully smoke out the ass who's sleeping with his friend's GF!

BYOB Comic Strips - Intrepid forumgoer Leningrad takes up the pen (or in this case the wireless optical mouse...) and inspires fellow posters to contribute comic strips. I recommend that you click on this link, print off your fave strip, and tape it in some old person's newspaper over their Mark Trail or whatever. That's right, you don't get to find out what happens to Mark now! Right over the crucial plot details is a big ol MSPaint bong! Try not to lose your false teeth grandma! If you do, I'm NOT helping you find them until you return my Duke Nukem 3D Plutonium Pak disc.

don't you hate it when you put too much alcohol in a drink - Too much alcohol? More like NOT ENOUGH! I'll tell you when I've had enough! Let that go, I PAID for that wine cooler so can I at least finish it? Fine, fuck you. Come on Kelsey, let's get out of here and maybe experiment with each other, you know, just us girls. Kels, where are you going?

The Simpsons Movie Anticipation Station Megathread (SPIDER PIG IS HERE!!!) - Don't have a cow, man! Have a large bucket of popcorn instead and wait for the part where they show Bart's weiner. I've seen other fans' interpretations of "Lil' Bart," but I'm so stoked to see the official dilz.

:buddy: scrabble time :byob: :chillaxe: - BYOB comes together to enjoy a classic game. Learn and laugh together with a spot of Scrabble! I tried a computer version of Scrabble, but it kept using words like "quoi" and "gaxb" on triple word scores. Stick to real people, preferably your most trusted posting allies. Still best to play it over the net though. In case you get hella mad and start just pounding your fists on the table until those tiles fly like a dictionary downpour and possibly get in your buds' eyes.

my new bubbler has the BYOB color scheme [PICS] - Here's a post I can get behind! Weezing got a new piece to help him chill out and decided to show it to the chillest bros on the net. Shivadas knows a thing or two about crafting premium pipes, so he showed some of his wares as well. All in all, an informative and upbeat thread. I never got my money back from that kid who sold me a dimebag of oregano, but the joke's on him because that oregano went into the best omelettes I've ever made. You know you succeeded at the cooking challenge when you can't stop eating and you've got grease and melted cheese runnin down your face like me. Eggs! Look up some recipes sometime, gimme a shout or else just try wikihow.com.