Allow Me, a Journalist, to Describe the Captain America: Civil War Trailer to You 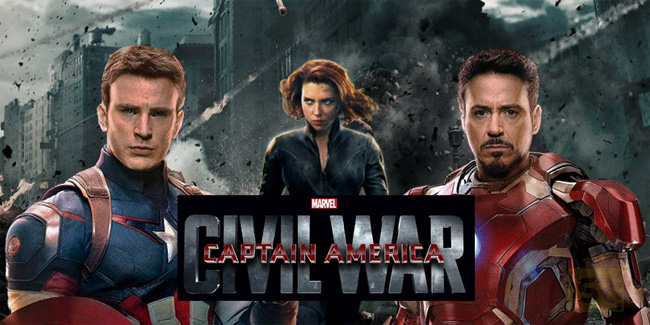 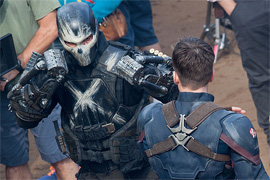 On-set action as Crossbones squares off against Cap.Have you been starved for information about Marvel's "Phase Three" of cinematic epics? At D23, Disney's secret society that meets under the Magic Kingdom, Marvel just showed a select group of people the trailer for Captain America: Civil War and the crowd went nuts.

I can't show you the trailer, I can't even show you stills from the trailer, but please allow me to describe to you what happens in that trailer. I have written a whole article about a movie trailer you won't see for weeks. This is a thing we regularly do now. It's called journalism. Look it up. You're welcome.

The trailer starts off and Captain America is on a cool motorcycle with machine guns on the side. He jumps it OVER a car and onto the second floor of a building and there is Winter Soldier on his back with his feet up in the air and Cap says "Trying to suck your own dick again, huh Bucky??" and they high five. "I don't even know who Bucky is," says Winter Soldier and he starts sucking his own dick. Cap has the laugh line here when he looks at the camera and says "I'm from the 1940s so I don't even know what a dick is" and the music rises dramatically. 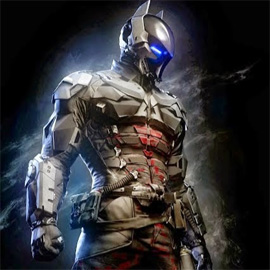 Could this be the new Avengers Bat Man?Cut to Falcon flying through the sky, doing loops and aerobatics like a stunt plane. He's clearly loving it. There is this unbelievable shot as he swoops through a tunnel and into a giant pipe and we realize he's doing it. He's a Mario now and the Mario theme kicks in as Falcon emerges from the tunnel just like a Mario.

William Hurt as General Thunderbolt (his character from Hulk reboot 3) starts talking in voice over. He says something like, "You've done it again Captain America. You and your friends saved the world. But people don't like you because you're too tough. We're glad you stopped godlike alien centipedes from another dimension and super robots from destroying our cities, but we're really afraid of the monsters in our midst. The monsters that are harder to see. I'm talking about you, the guy we made who has never done anything bad. Thank god Americans don't even know what happened in Guardians of the Galaxy because the universe was saved by a raccoon. We need you all to register with the government."

Patrick Stewart interrupts in voice over and says, "Wasn't this the plot of every single one of the X-men movies?"

"They're both Marvel so it's allowed," argues William Hurt, still in VO.

Cut back to a crowded New York office lobby and a terrorist in a skull mask reveals he is wearing a bomb vest. It's Crossbones. People scream and try to run for the door but there are more terrorists with guns preventing anyone from leaving. One of the security guards starts inching towards his gun and Crossbones grabs him and wads him up into a ball and shoots him through a hoop Space Jam style. He turns to the rest of the people and says "Nobody else try to be a hero." But then it pans to Tony Stark who was by the front desk writing a million dollar check with the memo line JOKES to a pretty lady. Riffs of "I Am Iron Man" play under the soundtrack.

Iris in on his pupil and out into a romantically lit, steamy bathroom. A naked woman is seen through the fogged glass door of a shower. Sexy but very PG. It looks to be Black Widow. Pan over clothes strewn across the floor. Black suit and zippers. Sexy bras. Comical number of guns. Up to a bed where we see Hawkeye is going to town on his own hog, just wildly chowing down to the nuts on his ding dong. He looks at the camera and says, "It's a living." 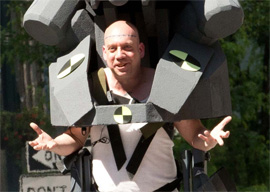 Unbelievable, crowd-pleasing teases at D23.Star wipe to Black Panther in his full cat man suit is struggling to climb a tree. He gets onto like the second branch from the ground and falls back down again. He looks at the camera and says, "There's another black guy in town and this one finally gets his own movie" and a green check mark appears next to him and it's great use of 3D.

Captain America says in Voice Over, "We need more friends. Cooler friends from other movies."

Paul Rudd as Ant Man shows up and gets ready to start sucking his own D but instead he is just doing crunches. It's a great laugh moment from the new wise-cracking, fun-loving Marvel character in this incredible shared universe. He seems to think it's really cool to meet Captain America and asks Captain America to autograph a photo. Zoom in and we see it's actually a photo of Dr. Strange and Cap together. But how did this happen, the Dr. Strange movie is coming out AFTER Civil War???

Cut to Himalaya marketplace. Primed for a Dr. Strange tease. Snow falls, peddlers selling exotic herbs. A mysterious man pulls back his hood and reveals, yep, it's Paul Giamatti as the Rhino. "I hope you didn't come all this way just to suck your own dick," he says to another hooded figure and it's... wait for it... Spider Man!

"Nope," says Spidey. "I came to do some avenging."

Stutter cut to Google Maps altitude above the village.

Rage Against the Machine's "Wake Up" starts playing as Spidey flies into the air straight at the camera. The crowd at D23 went wild.