The Neckbeard: A Beginner's Guide 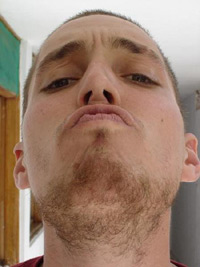 A textbook neckbeard. Charming.Let's face it: male nerds usually aren't very physically attractive. That's why they're nerds! If they were devastatingly handsome and had great genes, they would have spent their high school years banging away on cheerleaders instead of banging away on a keyboard in the computer lab writing awkward World War II versus Star Trek: The Next Generation fan fiction. Here's an example of WWII/ST:TNG fan fiction, by the way:

General Captian John Luc Picard turned away from the window and looked at Captain Jim Riker of the allies. "We must not surrender France to a Nazi," he says. "I don't want to." Riker nodded. "Yes i know." "But the germans have disabled our warp drive-powered paratroopers and now we are sitting ferringi." John Luc Picard frowned and faced towards the window. "We will hit them with our photon sherman tanks." he ordered. "Make it so."

Anyways, the point is that nerds aren't usually traditionally attractive (and also that – in hindsight -- attacking the Nazis with Photon Sherman Tanks wasn't a very good idea).

To make up for their shortcomings, some nerds come up with the bright idea to camouflage their skulls with facial hair. Here's a few reasons why:

It makes them feel more like they're living in the medieval "days of yore" most RPG's take place in. With a full beard, they're more likely to make a big splash at the next Renaissance Faire.

It makes them look older. A nerd with a beard just screams, "hey, I may still live with my parents... but I'm no KID!"

Beards are a great place to store food. So if they get hungry during a long Halo 2 session, they can just snack away on chunks of potato chips still clinging to life on the hairs of their cheeks.

Nerds are lazy. Shaving and personal hygiene are an inefficient use of time! Why, in the time it takes to shower and shave, you could watch a complete episode of Aqua Teen Hunger Force!!

I'm a huge nerd, but I'm more of a hairless nerd. Earlier this year I experimented with trying to make the transition to hairy nerd, but as you can see by the following picture, that experiment was an abysmal failure:

Gross. I'll stick to slapping razors up and down my face, thanks.

The result can be a neckbeard. 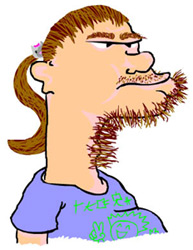 Beware!! This man can play bass!!! (thanks root)

A neckbeard is like a wild, untamed wilderness located beneath one's chin. In some places, the dense underbrush becomes so thick that it's nearly impassable and you'd need a machete to explore its hidden depths. In other places, there are bare patches of skin that no follicle dares to enter. And there are no tranquil oasis's in this sea of unkempt hair: there is only lingering debris from the remnants of the vanquished S.S. McChicken.

If you're living in the post-20th century, there is really no good reason for you to have a neckbeard. It's not very useful. No woman with a healthy level of self-esteem is going to walk up to you and stroke your neckbeard while swooning, "oooh, I love the greasy feel of this overgrown carrot patch protruding out of your throat!"

If a neckbeard is accompanied by a ponytail, then the guy is either a good computer programmer or a bad musician. The neckbeard/ponytail combination is very dangerous because it can generate a lot of grease. About the most dangerous thing you can do with a guy who has both a neckbeard and a ponytail is try to play racquetball against him: once he starts sweating, the floor will be quickly covered with a thick layer of slime that'll cause you to start sliding around all over the place. Eventually you'll careen into a wall and break your collarbone. So don't play racquetball against anyone who is really good at C++.

Reach down right now try to choke yourself with one hand. No, no... try to choke your THROAT. If you can feel hair, go shave it off right now, you ninny neckbeard nincompoop. If you snag a handful of fur and happen to be of the female persuasion, contact Joshua "Livestock" Boruff right away... he'd love to hear from you!