"What is good? All that heightens the feeling of power in man, the will to power, power itself. What is bad? All that is born of weakness. What is happiness? The feeling that power is growing, that resistance is overcome" -Friedrich Nietzsche, The Antichrist, section 2

I never thought that when my wife left for the Tupperware seminar in Houston, Texas, that my life would be forever changed by the chain of events set in motion by playing a simple game of Burger Time. Well maybe the word "simple" shouldn't be used to describe this intense Intellivision game experience. For me, Burger Time is much more than just a mere game. I associate it with a sense of calm and a deep spiritual introspection on the inner workings of this mysterious universe that can only be attained from thousands of hours of unchecked game play coupled with illegal narcotics. But before I begin my queer tale into the unknown, let me give you a little insight into the Zen of Burger Time.

When I was a young child, I didn't go outside to play much. My milky white skin would blacken and split open when exposed to the harmful rays of the angry sun. I had no real interaction with other human children, and as such I didn't know how to communicate in any acceptable language. My only stimuli was playing my Intellivision, so I started to express myself with a series of beeps and whistles. I learned everything about life from my precious video games, like how to jump over scorpions when trying to get bars of gold, and how to dodge slow moving laser blocks shot from evil robots. My favorite of all my games was Burger Time, a game that simulates a normal day for a short order cook trying to prepare hamburgers for his hungry customers. The object of the game is to walk across the layers of the hamburger, an act that may seem rude or unsanitary, but it is important to the hamburger making process. This somewhat flattens the layer of bread, meat, lettuce, or cheese, and it falls off its factory platform onto a lower one. Oh yeah, these are BIG hamburgers. I can only assume that either the cook is making these for Storm Giants or he is a tiny elf who is enslaved at a diner. Once you walk across all the layers until they fall onto the ground level as finished burgers, you have won the round and go onto the next order, but there is a catch!

Trying to stop you from completing your cooking duties is 2 rogue sausages, one crazy pickle, and a cunning egg. These tasty troublemakers will do anything to thwart the cook's meaty confections. They will work together to achieve to the failure of lunch at all costs. The sausages are the thugs of the group, burly and blustery. The pickle is the lovable troublemaker who follows the orders of the sausage twins. The egg is the leader of the gang; sly, deceiving, and full of malice. The cook's only defense against these delicious deviants is a handful of pepper and his wits. With the right timing, multiple enemies can be crushed under the weight of the falling giant layers of food and it's burger time!

When my wife left me alone for the weekend, I thought nothing of dusting off my old Intellivision and slapping in Burger Time for a few rounds. Those few rounds turned into hours, and before I knew it I was afflicted with what is known as a "vidapathy", when the brain locks into a dream/coma state from playing the same video game for too long a duration. This mostly only happens with older games that are repetitive and on a never-ending loop. After the vidapathy hit me, I leaned back into my beanbag, stopped holding the controller and started controlling the cook with my mind. In reality the cook stopped running after I let go of the controls and he was mobbed by the evil food, but I didn't notice. 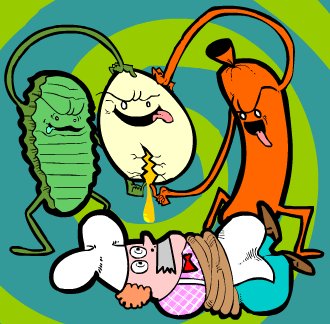 I became the cook. Running as fast as my little legs would carry me up the ladders of the hamburger making platforms, fleeing from the quad of miscreant eatables chasing me. I ran across a layer of top bun, sending it cascading down on top of a meat patty, which in turn fell down on a lower bun where it came to rest. One of the sausages was caught trying to pass through when the bun came down and was killed in the process. Then I threw some pepper on the egg and it wriggled around on the ground in agonizing pain as I giggled and fled to the next burger platform to repeat the process.

Sometime around 2:00 a.m. the next day I snapped out of it. The TV display showed the words "Game Over" with a victorious egg standing over the cook’s broken body. I looked around in confusion, realizing that I had been in a Burger Time dream state all day long. I was a little frightened, and the room was completely dark except for the glow of the television set. I turned on some lights, wiped the drool off my chin, and threw some cold water on my face. I felt like a rube for wasting an entire day playing a stupid game when I had a lot of tasks and chores that needed to be done this weekend. My wife would kill me if I didn't mend that fence like I promised I would months ago.

The cold shock of water to my face brought me back to reality. I raised my head out of the sink and reached for the hand towel to my left. Just then, I caught the glimpse in the mirror of what looked to be a large humanoid sausage running past the doorway. There is no way to fully explain the complete terror I felt at that moment. I opened the medicine cabinet and grabbed a pair of scissors for protection, and then scoped out the hallway. There was no man-sized sausage in the hallway, and it was all probably all in my head from the marathon of playing Burger Time. I laughed and laughed, slapping my knee until salty tears of hilarity ran down my rosy cheeks. That's when I saw the egg in the shower.

My psychiatrist is used to getting panicked calls from me at 2 in the morning, so it came to no surprise to him when I told him that I was being chased around my apartment by angry food. He tried to calm me down and asked if I've been taking the anti-psychotic medication he's been giving me, which I have. I explained to him what happened the day before that started with me innocently popping in the cartage for Burger Time, but soon afterwards it spiraled out of control until it was the full-fledged nightmare that I was living now. When he asked if I could see any of the food monsters right now, I said no, but that they can appear when you least expect it. He started giving me the address of a treatment center where I could get some help, but then the egg appeared and pressed the receiver with his yolk, hanging up on the good doctor before he could finish. I ran away towards the bedroom and the egg gave chase, followed by the pickle and two sausages. I circled around and tried to block them by knocking over chairs and lamps in their path, but they easily hurdled the obstacles and cornered me in the living room, ready to do horrible things to me like they did the cook. I had no choice, and did the only thing I could: jump through the plate glass window and off the third story balcony.

I woke up in the hospital a few days later with my wife by my side. My whole body was in a world of pain, despite the morphine drip that was hooked into my arm. My wife gently combed my hair and consoled me like a sweet angel. The doctor came in and made a crack about me not being able to fly, marked something in the charts, and walked away. What an asshole. It seems that in my desperate escape plan, I had broken both my ankles and one rib when I landed on a BBQ below. I also had multiple bruises and cuts that the doctor said will cause some scarring. I was a mess.

Then the most amazing thing happened. Marching in single file, the egg, pickle, and sausages walked into my hospital room. I was jolted in horror, thinking that they had come to finally finish me off once and for all. But to my surprise they came bearing gifts of flowers, pornography, and candy. They then stood by my bedside, placed the treasures next to me, shook my hand, and then left as quickly as they came. I welled up, fighting back the urge to cry by the touching gesture of the Burger Time food creatures, and my wife asked if I was ok. I gingerly took her hand and looked in her eyes. "Everything is going to be just fine." I said to her, smiling with unrestrained elation.

She just thought I was high on the morphine, but let me tell you friends, it was REAL, and I learned a valuable lesson from this whole experience: don't jump out of plate glass windows if you are being chased by giant food. Sometimes they just want a hug. Peace out.

You simply MUST read today's Daily Dirt! I have over 500 pictures of my pet cat juggling and definitive proof that a plane didn't fly into the Pentagon. Don't miss it!