The Producers Have Decided That You Have to Leave 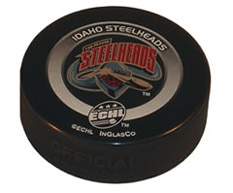 The template. The precursor.You return to the house after a hard day of competing in some inane challenge. You want nothing more than to flop down onto your bed in the guy's room and sleep away your troubles and tribulations. Instead you open the front door to find the director, two of the producers, and three security staff sitting in the chillout room.

"I'm sorry," says Nancy the nice producer, "but it has been decided that you're going to have to leave."

"We feel that you're a risk to the other people on the show." Rick, the mean director, explains.

Maybe you used Katie's toothbrush potentially spreading leprosy to her, maybe you walked around the house in your underwear and reawakened rape memories in Becky, or maybe you just said "fag" on accident around Hank the bisexual and he took it to mean that you're a hate-fueled homophobe. Whatever you did to get kicked off the show, it's a safe bet that it was really minor and boring. At the absolute worst you might have slapped some bitch that desperately needed to be slapped.

What's happening to this country? You signed up for a show where you have to eat live animals once a week to win money and they're throwing you off for being vaguely interesting.

They don't deserve you. 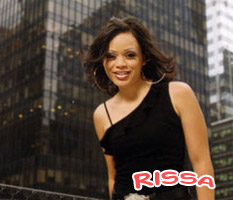 The bitch.Maybe you haven't been kicked off the show yet. There's a definite anti-you movement building in the house, but so far you've been playing it really safe to make sure you don't miss out on your chance for ten grand. Ask yourself this: is it worth ten thousand dollars to make television history? They're probably going to kick you off anyway. You saw Battle of the Sexes and you know how dirty these women play. They're going to make up an excuse if you don't give them one.

Forget about that lousy ten thousand dollar prize. It's time you set your sights on lasting celebrity. You could be the next Clay Aiken! If you do something infamous enough it could take almost six years for people to forget you ever existed. You could even squeeze out a book deal or a pilot in that time. If you actually just stay and keep competing you'll lapse out of the collective consciousness faster than All Your Base.

You want to hear the Donald say "you're fired" from behind one-way bulletproof glass. You want your departure from the show to involve spike-strips and tasers. This industry will never make you a star, but if you swing hard enough at it you'll leave a scar. Smash a big black mark on its face so that it never forgets you were there.

I'm here to help. We can do this together. Let's take a look at who is in this thing with you before we begin our planning. 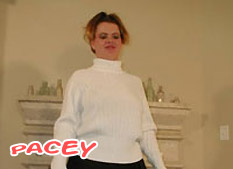 The sadsack.Rissa - Marissa, Clarissa, Diptherissa, whatever her real name is the only one that matters is Enormous Cunt. You think she's half black and half Puerto Rican. Regardless of her race she'd be right at home in a brown shirt whipping a column of storm troops into shape with the way she's turned all of the women in the house against you.

Pacey - You're not sure how a 19-year-old fat girl could be named after a character on Dawson's Creek but it probably involves a time machine fueled by Dave Matthews Band and Jello shots. Pacey will do whatever Rissa says but she would also sleep with you in a second no matter how abusive you are to her.

Bruce - Bruce loves God, extreme bungee jumping, playing his guitar, and being made politely uncomfortable by the homosexual of the house. Basically all the things you hate with the fire of the sun. He once said that he thinks stem cell research is evil because it kills babies so you're pretty sure he's less intelligent than that sucker fish thing that they put in the big aquarium.

Gunk - He's got catchphrases ("that's a crazy omelet" and "bruisin'"), he dresses in an eccentric manner, he's sometimes surly and sometimes wacky, and he is a huge slob who causes conflict in the house with his sloppiness. Gunk is the guy who is angling to be famous on the show and if you weren't the most likely one to be kicked off then it would be Gunk. You know Gunk's dark secrets though: he's going to school to be an actuary, he drives a Toyota Corolla, and he likes to wear sensible polo shirts with khakis. 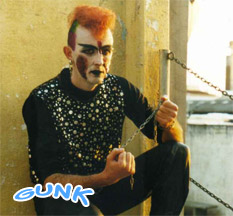 The kook.Hector - Hector is one of those gay people that are completely defined by their sexuality. Get ready to hear about gayness when Hector is around because that's absolutely the only topic of his conversations. There are two versions: how great it is to be gay and how hard it is to be gay. If you get him mad you might get to hear the third and dreaded "you don't respect my gayness" speech. Expect voting on your expulsion from the house shortly after you hear that one.

Victoria - Victoria is the show's frontline hottie. Any time the group goes out in public you can expect her to flirt with guys, girls, or a combination of the two. She's angling for fame almost as hard as Gunk but at least her propensity to climb into the shower with a girl and giggle and smack lips is more entertaining. Woe betide anyone who besmirches her slut honor though, she'll turn on you like a weather vane in a tornado.

Maria - Maria is the older woman. She could have been a house mother of sorts or at least a more mature sex object. Instead she disappears into the background and lazes through all of the contests. The producers would probably like for her to be kicked off the show because she doesn't play well with their demographic, but she's so infuriatingly inoffensive.

You - Whether you've become the target of one of Rissa's Stalinist purges or you've managed to step on the curled elf-toes of Hector you're on the skids. The current in the house has turned against you and it's only a matter of time until one of your innocuous statements or actions is intentionally misread as threatening or horribly insensitive. Then the council of seers will convene and scry your ratings future. The producers will decide that the drama of you getting kicked off would be a huge ratings boon so it's time to preempt them. Go out with a real bang.

Now that you've decided to stop waiting for the other shoe to drop we can move forward with your plans for creating an exit so memorable that the heavens of reality television will quake. The easy thing to do would obviously be to just commit some horrible crime against another cast member. These include but are not limited to: 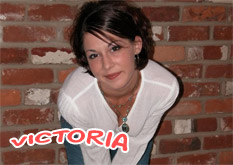 Drug Gunk, cut off his hands and feet, and then sew them back on backwards.

Beat Pacey unconscious with a bat and then defecate on her chest. She'll still probably sleep with you.

Convince Victoria that she's going for a lingerie shoot for Playboy and then drive her into the desert, shackle her to a rock, cover her with chunks of meat, and then drive off. Watch from a nearby mesa as she is devoured by coyotes.

Go bungee jumping with Bruce and use throwing stars to sever his bungee before it fully extends.

Contact a local fundamentalist church and convince them that Hector is your son and that he needs to be cured of homosexuality. Knock him unconscious by slipping some drugs into his coconut rum and then drive him to the church's walled compound.

Find out where Maria really lives and crucify her pets to burning crosses in her front yard.

Methodically sell all of Rissa's material possessions on ebay and then send Rissa-addressed sex offender notices to everyone in her home town warning that she will soon be moving back to the old neighborhood.

Committing blatant crimes will be sure to get you kicked out of the house in style, but it's also the lazy way off the show. On top of being famous you'll also probably serve time in prison, which has the added detriment of costing you the profits of a book deal. Your goal should be to do something as dramatic and inflammatory as possible without actually breaking any obvious laws. You should come up with your own solution to this problem but I'm happy to offer a few suggestions.

Buy a thousand-sheet ream of paper and print out 1000 copies of the word CUNT in giant text. Cover all walls of this house with these sheets of paper. Fill garbage bags with pudding, Jello, or technical animal fat and place these in the beds of your various housemates. Feel free to write nice messages like "BURN IN HELL" or "EAT A FAT DICK" on sheets of paper that you tape to the garbage bags.

Send an anonymous letter to every girl in the house that reads "I know about your abortion" with instructions to meet at a specified public location or else you will talk to the media. When one of them (maybe more than one) shows up at the specified address have your friends rush them carrying anti-abortion signs while you snap pictures from concealment as the tears roll. Follow up with bloody baby doll toys dropped periodically into the toilet in the girl's bathroom.

Wait for one of the female cast members to get really drunk at a party or club. When she goes to bed sneak into her bedroom, take off your clothes, and slip into bed next to her. Go to sleep. Never actually confirm or deny having sex with her but act really happy and whenever someone asks why you're in such a good mood tell them to ask the female cast member. After a week or so of this call a house meeting and announce that you have herpes.

As you move ahead with your plans to depart in dramatic fashion the only thing you really need to worry about is getting whisked away and edited out of the show to cover up the drama. To counteract this you need to make sure that you are visible in the background on camera in nearly every single taped scene. This will require intensive concentration and focus, but it will be worth it for your departure from the show makes Entertainment Tonight as the top story.

Why hello there, podner! How about you hitch up the old mare for a while and set a spell to read some Daily Dirt.