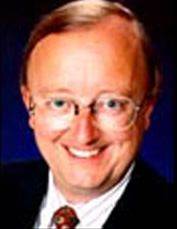 ESPN's John Clayton properly registered himself as a sex offender, then picked the Chiefs to win the Super Bowl in 2004.Now that week three of the National Football League season has wrapped up, I think it's fairly safe to say that "football experts" are neither "experts" nor "footballs." Yes, many football analysts have leathery, dimpled skin and air-filled interiors, but they don't have double reinforced lacing and you can't throw them in a spiral twenty yards through a hanging tire.

Anyways, before the season, a bunch of these jackasses picked the Kansas City Chiefs to win the AFC West. And The AFC championship. And the Super Bowl.

At the end of the third week, The Kansas City Chiefs are 0-3. That means they haven't won any games. They played three games and they lost every one. They did not win any games. That's not good.

Yet out of ESPN's twelve "football experts," five of them picked the Chiefs to win the Super Bowl in 2004. I'm not good at math, but I'm pretty sure that means 89% of ESPN's staff is mentally retarded.

Two of ESPN's experts -- and please note that the dictionary defines expert as, "a person with a high degree of skill in or knowledge of a certain subject" -- brilliantly guessed that Kansas City head coach Dick "Weepster" Vermeil would win the Best Coach of The Year Prize Monument Award Trophy. Here's what Dick Vermeil actually said after losing to the Texans:

"We've dug ourselves a big foxhole. The great thing about this organization is when we dig a foxhole, we dig it big enough for everybody to get in.''

Wow, that's great! So instead of digging just one grave for your own elderly ass, you've dug a huge mass grave that all the players, coaches, cheerleaders, and mascots can hurl themselves into! Wonderful! COACH OF THE YEAR!!!

My point is that ESPN's experts are full of bullhonkey, and I'm the only person in the entire world who is qualified to provide accurate predictions of the future outcomes of sporting events. Here's my "Hot Spicy Picks" for week four of the NFL season, and keep in mind that I know more than all the other "experts" because I am the most sassy and abrasive: 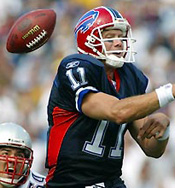 Drew Bledsoe makes $8.75 million a year, and this photo proves he's worth every penny!I'm a Buffalo Bills fan and our team has lost more Super Bowls in a row than any other team in the league. So they're a force to be reckoned with. Plus, Bills Quarterback Drew Bledsoe is a marvel of human engineering. One time he threw an old crock pot fifty-four yards through the air into a dumpster. And since the Patriots traded Bledsoe away like an old sock a couple years ago, he's out for vengeance. Bitter, revenge-vengeance.

If you think New England is going to win this game and break the consecutive "we haven't lost any games" record, you're an idiot with more drool coating your keyboard than ESPN's John Clayton. Buffalo will win by at least ten and punter Brian Moorman will once again show the entire league why they call him the "incredible, edible leg."

Oakland at Houston
Winner: Houston by 3

Just before the morning meeting, Oakland offensive tackle Barry Sims receives word that his father has passed away after a long battle with cancer. Inspired by Sims' loss, future Hall-of-Fame wide receiver Jerry Rice dies of a massive stroke midway through the second quarter. Sebastian Janikowski kicks a 43-yard field goal, but it doesn't make him feel any better about himself. Houston wins after a guy throws a ball at another guy and he catches it and then people cheer.

The Miami Dolphins and the rest of Florida get washed away in a hurricane, so the XFL's New York/New Jersey Hitmen are re-instated and smooshed into the league as an expansion team seven hours before kickoff. Although many of the Hitmen players haven't played since their last 2001 game against the Memphis Maniax , the sheer element of surprise allows them to overcome Chad Pennington's freshly-shaven Ivy league wuss passes. Hitmen quarterback Marcus Crandel throws a 57-yard touchdown with 4:13 remaining in the third quarter to receiver Alvin Harper, who initially catches the ball just as his left foot hits the right hash mark on the 42-yard line of the Jets. As he crosses the plane of the goal line, Harper plants his right foot, spins 27 degrees, and spikes the ball into the face of line judge Mike Durner. Harper immediately apologizes, saying, "whoa, sorry man, I just... you know.. there's a lot going on in my life right now."

In conclusion, ESPN sucks and you should never listen to their advice unless it's medical-related.