Did you miss me, Internet? I've been MIA for the last two weeks, and for that I apologize, but considering I haven't been funny for at least the last six, I think we can agree that you weren't missing much. Where was I, you ask? I was fiendishly busy attending to one of the most and sacred holidays known to man - Sweeps Week. Well, actually it was more like Sweeps Twelve Days, but that doesn't have the same ring. I was busily watching the season finales of shows whose entire seasons I have diligently missed. So, another primetime television season has come to an end in a spectacular explosion of weddings, surprise pregnancy announcements, bad guy catches, and supporting character deaths. Now, as we enter the horrible, reeking mire of summer reruns, there is only one question on everyone's mind - does Joanie still love Chachie? Because I always thought they were a little fake. Not that they themselves were phony, just that it sort of seemed like there was an extent to which they were both only in that relationship because they thought the other person was really into it. You know what I mean? Wait, that wasn't the question. That wasn't the question at all. The real question is, what will The Simpsons do next? 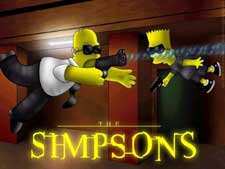 Now this is a possibility!

With its fifteenth season now over, The Simpsons has seen many crests and valleys in its overall quality, popularity, and fan base. But one thing that has never changed has been the show's dedication to good old-fashioned storytelling. Sure, the general scope of those stories may have shifted slightly from the family issues of the first couple seasons to the beating up Presidents and flying around the world on a whim of the more recent years, but the heart is still there. There can be no doubt, though, that the writers have been, well, reaching for plot ideas lately. And who can blame them? After coming up with fifteen years worth of mostly unrelated plot threads for one family, anyone would be pretty tapped out. And yet, The Simpsons perseveres. Now they are getting ready to enter their sixteenth season, after which the show will come up for renewal once again. Are the producers going to push for two more years of Simpson-mania, or will this upcoming season be the show's last? It's impossible to say at this point, but perhaps you can make the call for yourself. Something Awful's Corporate Spy division, of whom we are very proud, was able to infiltrate the heavily guarded Fox Network and get their hands on a few of the plotlines that we'll be seeing in Season Sixteen, and with only four causalities! A new best!

The really badly photoshopped scene we were never meant to see.

At Springfield's annual Pie Eating Contest, five-time winner Homer loses his title to Chief Wiggum when he is crippled by a sudden stomach ache. The family rushes him to Dr. Hibbert, who tells him with a chuckle that there's a mysterious growth in his belly. No sooner does he say this than Homer's shirt rips open and the "growth" gnaws its way out of his body. It turns out that it is an alien that implanted itself in Homer's stomach during his voyage through space (in season five's "Deep Space Homer"). The family is thrown into chaos when Mr. Burns gives the alien Homer's job at the plant. In the end, Homer regains his job and his dignity by challenging the alien to a pie eating contest, only to win by default when it turns out that the alien is lethally allergic to blueberries. Everything returns to normal.

Flush of the Titans

In an entirely new episode that is in no way related to ninth season classic "Trash of the Titans," in which Homer becomes sanitation commissioner, Homer finds himself in deep when he runs for sewage commissioner When the greeting card companies get together to invent a new holiday, Flush Day, in which people buy each other presents and then immediately flush them down the toilet, Springfield is united in their love of wasting money. However, Homer is outraged when the four foot high teddy bear, Sir Flushington, gets clogged in pipes after he jams it down the toilet and the city refuses to foot the bill. A defiant Homer challenges sewage commissioner Roy Matheson (voice of Leslie Nielsen) in the next election. Amidst the stream of poop jokes, fart jokes, and toilet jokes, Homer manages to ruin the entire town and Mayor Quimby enacts a plan to move all of Springfield five miles down the road again, although suspiciously everyone acts like it has never been done before. Everything returns to normal. Band J5 has a cameo.

In a too-little too-late apology for that godawful episode "Bart to the Future," where the Simpsons go to a casino and the Native Americans show Bart a vision of his possible future, this season presents yet another look at what the world of tomorrow holds for the Simpson clan. On the day of their anniversary, Homer plans to play a prank on Marge. As he goes out looking for the necessary ingredients to put his scheme into action, Lenny and Carl caution him against tricking his wife on their anniversary. Then, improbably enough, Homer finds the What If Machine invented by Professor Farnsworth of Futurama fame. Apparently it was onboard when the Futurama crew flew to the past, and they left it behind. Or something. Also they left behind detailed instructions on how to use it. Homer asks the machine what would happen if he played a prank on Marge that evening. The machine reveals a future in which Homer has been estranged from his family for years. He returns home with his manservant/assassin Apu to tell Marge that he is dying from stomach cancer. Marge calls the rest of the family home for a reunion, including Bart, who became a tennis star and then burned out, Lisa, who made a fortune in the business world and then burned out, and Maggie, who became a young playwright and then married the much older Martin Prince and burned out. Also, Milhouse is now a successful novelist and even more successful drug addict. Quiet, subdued hilarity ensues as Homer tries to reingratiate himself with his family, even though his children hate him and Marge is now engaged to Carl. Carl discovers that Homer is faking his cancer and gets him kicked out of the house, but Homer manages to charm his way back into the lives of his children and their junkie friends. Then he dies. In the present, Homer realizes that playing this prank on Marge would give him cancer, which really isn't the point at all, but at least he decides not to go through with it and everything returns to normal.

In an episode starring everyone's favorite disgruntled, drunken, Scottish elementary school janitor, Groundskeeper Willie, Willie's brother Angus comes from Loch Ness to stay with him in his shack behind the school. Dismayed after seeing Willie take orders from Principal Skinner, Angus encourages Willie to go on a one-man "Braveheart" style Scottish rampage through Springfield Elementary to demand more respect and better wages. Dozens of children are killed, including Lisa. Willie is fired, and then sent to jail for the rest of his life. Angus takes his stuff and flies back to Scotland. The parents of Springfield collect their dead. Uh... um.... gee, this one kind of got away from us... uh... oh, okay, it, uh, turns out that it was all just a dream that someone was having. Oh, let's say it was Santa's Little Helper. Yeah, that should do. Everything returns to normal.

I can say without any degree of pride or personal prejudice that this is the single best picture that ever was or ever will be.

When Professor Frink starts having horrible nightmares about aliens, he hires the Simpson family to blast into outer space. On their journey, Marge starts exhibiting frightening telekinetic powers. When their shuttle comes under attack, it is only by giving herself over to the powerful entity known as the Big Fiery Bird Force that Marge is able to save her family. The Big Fiery Bird Force possesses her body and leads the Simpsons on a quest across the galaxy to ally with Empress Kodos against her insane brother Kang, who is on a quest to control the M'Kraan Crystal, an object capable of destroying the universe. In the end, the Big Fiery Bird/Marge must sacrifice herself by flying the crystal into the heart of the sun. Luckily, it turns out that that wasn't really Marge, but rather a clone of Marge that the Big Fiery Bird Force created, but forgot to tell anyone for some reason. The real Marge is okay, and everything returns to normal.

Those Simpsons writers sure do come up with some wacky material! Who says they're running out of ideas? These all look pretty unique to me! Will Season Sixteen be a winner? I guess it's still difficult to say, but I can guarantee that all of the actors, artists, technicians, and other highly paid professionals on the staff will be working as hard as they can to make this season the best it can be. All of us here at Something Awful wish Matt Groening and his crew the best of luck and remind them that Marvel has a massive legal department.

The Weekend Web is Going Bi!

Hello internet friends, Zachary "Spokker Jones" Gutierrez here with a heaping helping of Weekend Web! Starting this week Weekend Web is going bi-weekly. I recently got myself a job that actually puts food on the table and not that astronaut shit you have to add water to that I usually eat. From now on I will be slaving away in a huge corporate office, tackling a two hour commute each morning, and basically living that American dream, living to work. But enough about me, let's talk about you. We've got four forums hot off the presses. I hope you like the internet!

Thank you, please drive through.