NASA Got Me Working 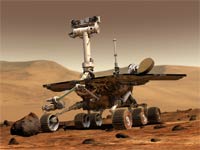 I'm not sure which of the rover twins this one is, but it looks more human than either of the Olsen Twins.Contrary to the mostly anti-NASA views featured on this website, henceforth to be known as "Something Awful," I actually like what those crazy rocket scientists do. True, I don't really understand half of what it is that they do, but the part involving space and space-related activities is definitely the part I like most. I'm an avid proponent of outer space and putting whatever we can in it, including people, machines, animals, and piñatas, if only to study the effects of gravity on candy distribution. I firmly believe that outer space is an intricate component of the future, if not an outright enabler of the passage of time. Thusly, it's only natural we dedicate billions of dollars to making the most of the infinite space resting above our murderous atmosphere. This planet only has so much to offer, and outer space has so much more.

The biggest complaint about NASA is that they spend billions of dollars to do seemingly miniscule things, such as placing a poor man's Number 5 on Mars and having it beam back jpegs of rocks. It's easy to call something like that foolish, but I'd like to see the critics build a better robot that does more interesting things, like maybe hurling the rocks around or eating the rocks. What about building a fort out of rocks? The possibilities are nearly endless. If they really want to show NASA up, they should build a bully robot and send it to Mars to pick on Spirit and Opportunity. But do they? No! They lack the skills and resources it takes to get things into space, let alone have them do things once they get up there. It costs a lot to train people and build equipment capable of functioning in the cold vacuum of outer space, so we shouldn't blow our O-rings when the annual NASA bill arrives in America's giant communal mailbox. 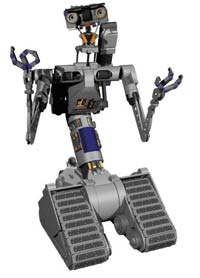 No disassemble space program!You can argue all you want that we have better things to be spending money on, such as realistic goals like blowing up the Middle East, or idealistic goals like wiping out world hunger and raising education levels here and abroad. We could pretty much accomplish any of those goals if we set our minds to it, but we don't. So then why is it a problem to earmark some of the money being wasted anyway to send robots to far off planets? I bet if those robots were really children with cancer, people wouldn't think twice about making their dreams come true. I'm not suggesting NASA program a robot with cancer, but it's always something to keep in mind. It certainly would capture the hearts of Americans to see that bald-headed robot struggling across the barren Martian surface. Will the poor robot's precious fuel cells survive long enough to complete the mission? Only time and billions of dollars will tell. Granted, it's probably more practical to try to cure cancer than hope it goes away while simultaneously giving robots cancer, but we won't know until we try.

This world is filled to the brim with war, suffering, disease, famine, strife, and a wide assortment of aches, pains, and rashes. Space is virtually unspoiled by our human flaws, and thusly an ideal place for future expansion and corruption. We can leave all the ugliness behind in favor of creating new ugliness in a place where we have more room and opportunity to make it that much more epic in scope. That's why I support our efforts to spend billions of dollars on space plans. I support it much more than other government expenditures, such as Rural Free Delivery, and think we should dedicate even more money to taming the stars, albeit in a figurative sense because stars are pretty wild and hot. As is, the money spent on space technology and exploration also fuels a great deal of spin-off technology, ranging from improved jet engines to better home insulation. The Clapper, for example, was a NASA invention that hit the consumer market after astronauts found the lack of sound in space to be a deathblow to the device's potential uses. The Chia Pet? That was NASA, too. The trickle down effect would yield countless benefits, but only if we take the time to empty the bladder of possibility that is space exploration. We're doomed if we hold it in, so it's time to let go and accept the inevitable. 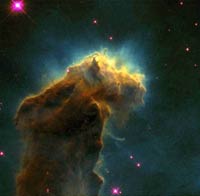 This is outer space. This is where we need to be, even though it is very cold and dark.Right now the biggest expense we face as Americans is war. We can busy ourselves with wars here, igniting witchhunt after witchhunt, but sooner or later we're going to run out of viable enemies. Sooner or later we're going to stop hating each other over petty differences. There are enemies in space, undoubtedly, and we need to start killing them for a change. Sure they might be primitive bacteria or algae, but by golly, who wouldn't get inspired to participate in humankind's first ever star war? I know I'd be happy to, should I be lucky enough to live to see the day. In an age of anticipatory self-defense, we're completely ignoring that outer space offers up countless threats we simply have no intelligence on. Should we be content to live with this gaping gap of knowledge, or should we endeavor to get a head start on marking our territory in the stars? Once again, it comes down to not holding it in. 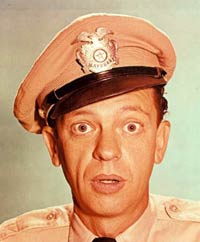 Don Knotts is just good science.I realize that as of right now, there are a number of scientific and logistic constraints making space exploration impractical. Thusly, I have something of a solution to those mysteries of space responsible for keeping us so close to our earthly cradle. To overcome the unknown, I recommend a bold, experimental shuttle mission involving a crew of astronauts well versed in solving mysteries. This crew would consist of Peter Falk, Angela Lansbury, James Garner, Andy Griffith, Dick Van Dyke, and Abe Vigoda. These men, and one lady, are all experienced television sleuths quite capable of putting their deductive reasoning skills to use in unraveling the cosmic riddles. Plus James Garner has already played an astronaut once. What's more, Don Knotts could go along, if only to serve as a logical foil to the detectives. Having someone to offer outside-the-box solutions is good science no matter how you look at it. Since all these TV detectives are old, losing them in another dreadful shuttle explosion wouldn't be too unbearable, but let's not think about such a terrifying scenario. I'm sure it’s a risk they are all willing to take as Americans. More than that, it's a risk I think we're all willing to take, even if it means no more made for TV movies involving our favorite detectives.

So let's do it! Let's spend even more billions of dollars on space! Let's put bases on the moon and sun and Mars, and lets build more robots to look at rocks on every planet we can get to. Then, once we conquer the stars, we can work on curing robot cancer. It's the least we can do for or faithful explorer friends.