Nonsmoking Makes Me Want to Smoke 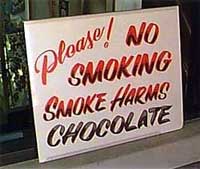 One of the first failed attempts to cut down on the amount of smoking. Unfortunately, it turns out nobody gave a damn about chocolate.

As you're undoubtedly well aware of, the tobacco industry has been facing an uphill legal battle ever since the FDA realized the fact that cigarette companies were mass manufacturing devices which murder people over a long period of time. This is one of the main hazards of being in a business that bases its business model around addicting people to your product and then forcing them to die. Remember the movie "The Stuff" with Paul Sorvino and that one guy from "Law and Order," the film about the company that manufactured addictive alien slime nonfat yogurt for human consumption? The stuff tasted great and everybody loved it but it had the unfortunate side effect of making you turn into a zombie or worse yet, Paul Sorvino. Eventually some wily 8-year old kid was able to topple their entire organization by using complex methods of puerile ruses and forcing various objects to explode. Oh yeah and there was also some black guy in the movie named "Chocolate Chip Charlie." That alone points out the danger inherent to this industry.

So the tobacco industry finds itself in court over and over again every day in every state because the government wants to keep tobacco legal (allowing them to pile outrageous taxes on it) but they also want to sue the snot out of them (so they may gain even more cash). The tobacco industry is playing a game of "Press Your Luck" except every square contains a Whammy that creates sarcastic smirking noises while running off with a large bag that has a dollar sign stitched across it. I can just imagine how these Congressional hearings go...

The government's solution to this problem, naturally, was some series of complex and nonsensical lawsuits from over 183 states, some of which haven't even been discovered yet. Every state or country or citizen or housepet has the right to sue cigarette manufacturers for millions of dollars because the old, outdated tobacco warning label from the 1950's wasn't accurate enough to sufficiently discourage people from smoking:

In the mid-1990's, when science conclusively proved that smoking cigarettes resulted in a medical condition known as "death," the government slightly altered the warning label to the following:

That wasn't enough for the government though (since they needed more money to buy gold rocketships or give weapons to ninth-world countries who are still trying to figure out the secrets of extracting water from sand or doing whatever the fuck they do with all the money we send them), so somebody got the bright idea to start taxing the hell out of cigarettes. Do you know how much a pack of Camels now costs in New York? $1359!!! No wait, that's the price of an XE 2000 SST Turbo XE fan which provides the ultimate in corrosion protection, as this motor is built for highly corrosive environments. My mistake. I don't actually know what the price of cigarettes cost in New York, but if I had to guess, I'd estimate them somewhere around the price range of an XE 2000 SST Turbo XE fan. 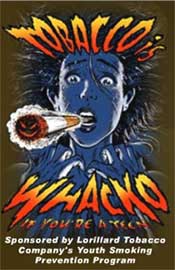 "Tobacco Whacko" sounds like the name of a really cool roller coaster or a Mexican wrestler.

However, this wasn't enough for the US government! Noooooooo, they had to get even greedier and sue for even more money so they could invest it in ads explaining how terrible smoking is and why you should never smoke and how your family will disown you if you even mention the word "cigarette." This makes sense because the government is run by stupid white people whose only exposure to our world comes via soap operas and dishwashing commercials that are played on their 44-inch plasma screen television inside their yacht's bathroom. After skimming a hefty portion off the top to cover expenses such as "research" and "hookers," the government funnels the rest of the extorted tobacco company money into anti-smoking groups which are apparently run by the people who were kicked out of the audio / video group in high school for being too nerdy. They're responsible for modern works of art such as the following gem "Butt Out Now", which is one of the better anti-smoking sites out there (which is like saying "Chairman of the Board" is the best Carrottop movie).

Isn't it totally frustrating how you always think of the perfect comeback days after someone's put you on the spot in front of your friends? Use our Cool Comebacks Generator to come up with some words to break the pressure.

Wow! Millions and millions and millions of dollars to come up with those witty four retorts! Your tax dollars at work, ladies and gents! Now I personally can't think of a reason why replying with one of those four hilarious comebacks wouldn't result in the peer-pressure smoker's instant combustion due to pure humiliation, but apparently the government needs more forms of media to spread their anti-smoking message across, and television just happens to be one of these lucky ducks. If you've ever turned on your TV within the past two decades, you've probably seen at least several hundred commercials like these every five minutes: 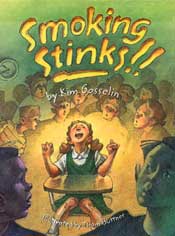 EVIL BOY WEARING JEAN JACKET: "Hey Cindy, want to go out tonight and party? I've got three cigarettes!"
CINDY: "No thanks, smoking isn't cool!"
EVIL BOY WEARING JEAN JACKET: "Okay, your loss!" (Walks away chuckling)
(Later that night)
CINDY: (Arriving home to greet her parents in the living room) "Hi mom, hi dad! I just came back from the library where I filled my mind with wonder and knowledge!"
MOM: "Cindy, we have some bad news for you."
DAD: "You know that evil boy who always wore the jean jacket? Well he died tonight. He smoked a cigarette and his lungs jumped out of his chest and strangled him to death."
CINDY: "Oh no!!!" (Begins to cry)
MOM: "Don't shed tears for him, Cindy; he's already dead. No, seriously, he's already dead."
CINDY: (Happy again) "Let's go eat ice cream!" (Family exits room. Some guy in a huge furry raccoon suit enters)
RACCOON SUIT MAN: "Hey kids! Next time somebody asks you to smoke, tell them that smoking's groadie to the max! Instead of lighting up, why not ride a bike or learn how to cook? Listen to the rules, smoking is for fools!" (Casio keyboard "rap" preset patch plays in background. Special celebrity Brian Dennehy walks into screen)
SPECIAL CELEBRITY BRIAN DENNEHY: "RAAWR! Don't smoke kids! AAARRRWWW, MY FACE HURTS, RAWWWRGH!"
(400-point white block font letters spelling out "THIS COMMERCIAL WAS SPONSORED BY 'BUTT OUT, CIGARETTE BUTTS!'" fades into screen)

So here's where my theory comes in. The tobacco industry can't possibly be making any money since the government is taxing and suing the hell out of them nonstop, in addition to running smear campaigns and doing as much as they can to compare smokers to The Great Satan. Latest statistics show that there are currently only seven places where people can legally smoke in the entire United States, and one of them is simply listed as "outer space." I firmly believe that the tobacco companies are forking over millions of dollars to the absolute most lame and retarded anti-smoking advertising firms they can find so they'll inadvertantly get people to start smoking in an attempt to lose all association with the grotesque geekiness of the anti-smoking campaign. Every time I see a fucking TRUTH.COM ad where retarded teenagers use slang some advertising executive overheard from a TV show on the UPN Network, I get the urge to buy cigarettes. Each time a popup ad flies onto my screen and encourages me to play a Javascript game in which you control Sammy the Snake through a maze full of evil killer cigarettes, I desire a smoke more and more. Now don't get me wrong; I hate smoking. The smell of cigarette smoke makes me physically nauseous and I can't stand in a smoke filled room for more then five minutes without getting a headache and having my eyes water. However, these side effects are a small price to pay in exchange for knowing that I am absolutely, positively, 100% diametrically opposed to the moronic anti-smoking governmental campaign. The tobacco industry is funneling hundreds of millions of dollars into one of the most clever reverse psychology advertising campaigns in the history of the world, and for that I applaud them. Smokers across America, stand up and be proud - you may be slowly dying, but you're dying with dignity... as opposed to the anti-smoking campaign embarrassments, who have already died inside.