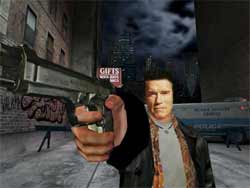 This is the face of justice, although it's not Photoshopped very well.Thanks in part to this week's Photoshop Phriday tribute to a certain concentrated mass of fortified meat, I realized something important: there are simply not enough Arnold Schwarzenegger games out there. Beyond the "Terminator" franchise, the only other games I can think of are "True Lies" and the absolutely horrid "Total Recall" for the NES. I did leave out the "Commando" and "Predator" games I guess, but it's not like those count for anything. The thing is that Arnold, as one of the busiest actors in Hollywood, has done a whole shitload of movies. And while shit is definitely the keyword in that sentence, many of those movies went without precious video game tie-ins. Normally this would not be a problem at all. In fact, it would be so not a problem that it could easily bring the Palestinians, Jews, and probably even the Nazis together in harmonious agreement at least long enough for them to have a cookout and maybe a volleyball tournament. However, it bothers me. Oh yes, it bothers me like that rash I got after spending the night in Frolixo's haunted barn.

One of Arnold's most endearing characters was that of Detective John Kimball. Because of Schwarzenegger's absolutely visceral performance as the hardened cop deep undercover in the jungles of kindergarten, the movie pulsated with a sort of twisted energy never before seen in American cinema. "Kindergarten Cop," one of the finest motion pictures of all time, took the world by storm. More importantly, it captured my imagination and held it prisoner behind miles of landmines, guard towers, and German razor wire. Early on in the film, you felt that at any minute one of the kindergarteners could drive Kimball over the edge, turning him into a murderous loose cannon so consumed with acquiring revenge that his badge no longer meant anything. Unfortunately, at the end of the film, he turns into a total pussy. But then thanks to the wonders of stop buttons and denial we can easily forget about that, though. I think this site that I cannot read put it best when they said:

I personally don't speak German, so I certainly hope they weren't talking about starting another dreadful war and were in fact praising "Kindergarten Cop." The Germans owe us this much, I think. Getting back on track, maybe I'm on my own when I say the thrill of being a badass undercover cop surrounded by fragile little children I could easily snap into tiny pieces sounds quite rewarding. I could wander the halls popping spines and crushing faces all the while tossing out awesome catchphrases like, "now that's what I call hitting the books… PUNK!" Seeing as how that sort of thing is strongly discouraged in real life, it would take some sort of "video game" to make it happen, which is fine with me since I like substituting such tired notions as reality and consequences with bloodlust and moral ambiguity. 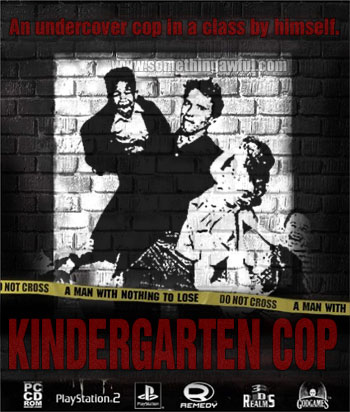 I felt the best way to bring "Kindergarten Cop" to life in the video game world was to start a total conversion, or a mod. That way I could get other people to do the work while I cry myself to sleep and have panic attacks. Ideally, I wanted a game that mirrored the gritty world of undercover police work, and so I decided that Max Payne was the perfect vehicle to rework into a bloody kindergarten shoot 'em up. The two go together like metal and magnets or Ben "Greasnin" Platt and escort service bills. Max Payne was a man whose family had been murdered, and the only fuel left in the veritable gas tank of his soul was high-octane revenge. He was also an undercover cop in a hostile world. Detective John Kimball was at odds with his surroundings as well. While the womenfolk admired his strong looks and respected his role as a "teacher," deep down he was drowning in a sea of textbooks and energetic pupils when he really wanted to be drowning murderers and rapists in a sea of blood. While Max's wife was murdered as part of some sort of vast conspiracy that Remedy must have bought at an Ion Storm garage sale shortly after Deus Ex was finished, that ultimately isn't much different from John Kimball's dilemma: his trusted female partner is terribly ill. Being sick is a lot like being dead, at least according to my fanatical doctrine soon to be terrorizing the world. The bottommost line is that both men are scarred, hopeless bombs just looking to explode at the right time and blow as many people as possible up in the process.

Since I have my platform all decided on, it's now time to wow you all with the list of awesome features I hope to include in this hot and heavy mod:

Sophisticated Schwarzenegger Facial Expression Engine (SSFEE): if you're going to make a game with Schwarzenegger, you damn well better take full advantage of his full repertoire of mind-bending contortions and expressions. In real life, Arnold's face moves and contracts with such force that his face literally has its own gravitational pull, which may or may not have something to do with why he gropes women all the time. You can expect a wide plethora of expressions with this mod, and none of them appropriate to the situation.

Spit Wad Time Kindergarten Combat: slow reality to a crawl as you move around and dodge spit wads, rubber bands, and other primitive guerrilla warfare tactics common to young children. Sharpen your senses to hyper acuity, see the spit wad coming, dive out of the way, and fight back with a slow motion Wet Willy while still in mid air.

Comic Book Cutscenes: see the story progress through dramatic and fully narrated comic book cutscenes. Want to watch how Detective John Kimball deals with his students as they veer into ominous and foreboding laden topics such as human genitalia and gynecology? You'll finally get that chance. All with the classic, comically dramatic writing that helped carry Max Payne over the edge.

Surreal Dream Sequences: the best part about Max Payne was the awesome dream sequences that had you running through a maze-like home, tiptoeing across blood tightropes, and jumping across platforms in a low gravity void all under the guise of exploring Max's subconscious and buried feelings. Detective John Kimball will also have to take a journey through his mind, using jumping puzzles and confusing school-like mazes as a metaphor for his own overcompensating male mentality and feelings for his partner.

I do believe I have a genuine hit on my hands, and can't wait to get it done and out for you all to play. I definitely think that will totally happen, for real guys. And just as soon as I get this done, I can start on my epic "Hercules in New York," "Junior," "Twins," and "Jingle All the Way" total conversions for Doom III. You can bet Sinbad is one scary motherfucker when bathed in the moody real time lighting of a Martian outpost, but then again he is even in normal lighting.

Hey everyone, it's Ben "Greasnin" Platt here with yet another movie review. Let me tell you, it doesn't happen often, but I absolutely loved this movie! It's a fantastic story about a group of students who... aw, I'm not fooling anybody. The movie's called "Knight Chills" and it sucks something fierce.

It's a little known fact that I absolutely hate puns. I can't stand them, even when I use them. Especially when I use them. The title of this movie is a pun. That doesn't bode well for the rest of it. Sad to say, that one crappy-ass pun is several times more clever than anything in the actual script. The only possible excuse for the existence of this movie is that a bunch of people were sitting around, lighting themselves on fire and seeing if it would hurt every time, when someone said, "Hey, you know what would be a good idea? Let's remake 'Skullduggery,' but let's get rid of the ancient curse plot device and let's make every character completely unlikable!" Everyone must have agreed that this was a sound plan, most likely due to severe mental retardation, because "Knight Chills" exists, and lo and behold, it is "Skullduggery," minus the ancient curse plot device and without a single even remotely likable character. The best thing this movie has going for it is that the little boy who plays Jack Jr. is so horribly annoying that all of the other actors seem better by comparison. Well, that and it's not directed by the Polonia brothers.

Zing! Take that, Polonia brothers! Now go and read the review. If you don't a creepy dead girl is going to crawl out of my TV and kill me!