Who is the most dangerous person in the world? Is it Osama Bin Laden, terrorist mastermind now driven into hiding? Could it be Hillary Clinton, queen bee of the liberal elites? Maybe you even think it's George W. Bush, America's President.

All of those answers and many other answers which I did not list there are incorrect. The correct answer is… 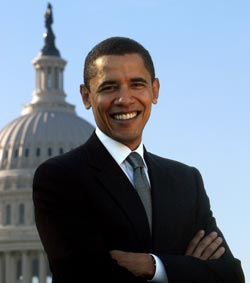 Those of us who know a little something about B. Hussein Obama are very aware that this jihadi wolf in black sheep's clothing is the greatest threat to not just the American way of life, but the American way of life in the entire world. Mr. Hussein Obama's hype machine of lies and disinformation has begun to propel him forward on his campaign to become the next President of the United States of America. His big smile and sweet words are winning over audiences, but a few patriots are trying to expose the real B. Hussein Obama.

I am pleased to announce that as of this day I am launching Obamawatch, a multimedia watchdog organization dedicated to compiling and distilling the facts about B. Hussein Obama that he does not want you to know. This Imamchurian Candidate has to be stopped before he gets into the White House, and the best way to stop him is to reveal the truth.

Obamawatch Mission Statement: Our mission at Obamawatch is to bring the world the pure and unvarnished truth about B. Hussein Obama. No spin or distortion, just the naked facts that B. Hussein Obama doesn't want you to know. Become an informed voter and help keep America free!

Greetings Obamawatchers and welcome to the first installment of Obamawatch.

Since this is our debut Obamawatch release we feel that it is important that you be brought up to speed on Senistor Barack Hussein Obama.

B. Hussein Obama is a member of the Democrat Party from Illinois. He was elected twice as a State Senator and then he became a US Senator in 2004 following a smear campaign against Republican Illinois Senate candidate Jack Ryan. The attacks focused on Ryan's private life and involved a busty harlot from the Star Trek TV show. B. Hussein Obama is the only African American currently serving in the Senate.

B. Hussein Obama announced that he was officially entering the Presidential race on February 11th of 2007. B. Hussein Obama made the announcement in front of the state Senate building in Springfield, Illinois. In his announcement speech B. Hussein Obama compared himself to past Senator and President Abraham Lincoln, a known homosexual, and pointed to Lincoln's willingness to ignore state's rights as a view he shares.

B. Hussein Obama wrote a book entitled Dreams from My Father in which he admits to using the illegal drugs cocaine and marijuana as a teenager. Obama claims that he no longer uses these drugs, but has yet to offer proof.

These facts are just a few that Obamawatch has dug up over the past few days. As more information becomes available we will bring it to you and update our profile of B. Hussein Obama. 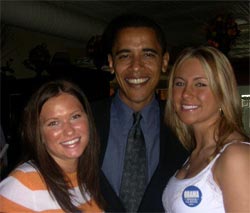 Is infidelity an issue in Obama's life? Keep reading and you may discover the truth!Barack Hussein Obama is wildly unpopular with black politicians and pundits because of his Muslim African heritage. In an article in Salon by black person and black people authority Debra J. Dickerson, it was revealed that B. Hussein Obama is not even black!

Which brings me to the main reason I delayed writing about Obama. For me, it was a trick question in a game I refused to play. Since the issue was always framed as a battle between gender and race (read: non-whiteness -- the question is moot when all the players are white),I didn't have the heart (or the stomach) to point out the obvious: Obama isn't black.

But this story about his fake black heritage took a turn for the bizarre when Tucker Carlson, on his excellent "Obamater" segment, revealed some strange details about the church to which B. Hussein Obama has pledged his loyalty:

So Barack Obama is a member of a church called Trinity United Church of Christ. It's a predominantly black church in Chicago, that espouses something called the "Black Value System," which includes calls for congregants to be "soldiers for black freedom" and a, quote, "disavowal of the pursuit of middleclassness." Now, it would seem to me, Tom, not to make a broad sweeping statement here, but a racially exclusive theology, a theology that ministers to one group of people, based on race, kind of contradicts the basic tenets of Christianity, and is worth talking about. Wouldn't you say?

I think we're through the rabbit hole on this one and we've just taken a big huge pill of truth! B. Hussein Obama is not the black populist candidate he pretends to be on TV and on the campaign trail. He is actually a white black-power extremist who wants to destroy the middle class and discards our antiquated white value system in favor of this "Black Value System".

Which is it Mr. Hussein Obama? Do you want to destroy the white race or are you white? Either way, I think we've turned another corner in the truth on Obama.

I would like to end this first installment of Obamawatch by thanking everyone for keeping their minds open and exploring the man behind the curtain. If you have any photographs, tips or rumors about B. Hussein Obama, or you just catch wind of an interesting news item, please email our tip line.

Special thanks to Johnny "DocEvil" Titanium, who shares our love of American values and freedom and designed our logo to help us keep B. Hussein Obama honest.