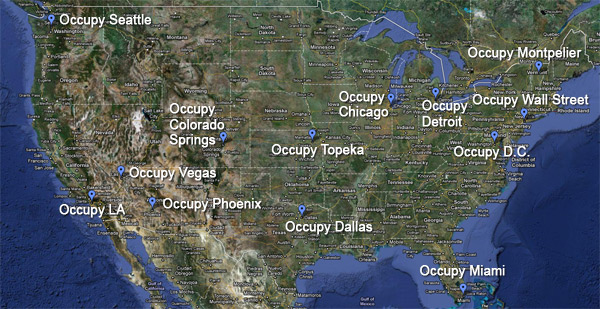 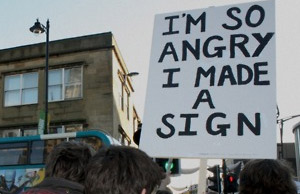 Going gangbusters. The ranks of protestors swell almost every day despite increasing resistance from police and a hostile, ultra-rich, miniature mayor.

Currently experiencing difficulty as SEIU workers joining the protest are demanding the 505 Sign Makers Union and 235 Sign Hoisters Union be hired to do all the protesting for $36 an hour plus two hours for lunch.

"This is what democracy looks like!" chant ruined by perimeter of armored trucks from Fort Carson surrounding waste-water filled "free speech pit."

Protest disbanded by police after being mistaken by tourists for Mexican kids handing out escort advertising cards. Considering relocation to Hoover Dam since nobody who works for the government will go anywhere near a giant infrastructure project.

Drum circle and weed turned out to be way too excellent for the protest to stay focused. Light rain prompted a relocation to Top Pot for Diplomat drips and crullers.

Shut down by Joe Arpaio's SWAT team when someone posted on their Facebook that they thought it would be funny to bring a legal semi-automatic weapon "like those Tea Party idiots do." All arrested protestors currently dressed in baby diapers at Sheriff Arpaio's new Baby Jail where men have to kiss guards ("mommies") to get their meals ("babas") and he webcam streams the entire jail for a monthly fee that goes to finance Maricopa County's newest anti-aircraft missile.

Protest held in different place every day depending on location of best food trucks according to twitter.