Seemingly out of nowhere, Arrested Development is coming back for at least one more season and a feature film. If you're an internet asshole, your first instinct might be to might be to take a negative stance on the whole thing as a direct response to the vocal supporters of the show that have been clamoring for a comeback for years.

That's because you are an internet asshole. Why would you let other people's reactions have any bearing on your opinion of any form of entertainment? What's the purpose of keeping tabs on an imaginary popularity tipping point, beyond which you feel the need to anchor the opposite side by plopping down on the ground and crossing your arms, pouting loudly? You are way weirder than the people you're trying to spite. Yes, even the ones that thought they could bring the show back by signing online petitions.

That said, there are reasonable concerns. Five years have passed since the show's cancellation. Five years. Christ, we're getting old. Who knows how such an extended hiatus will impact the writers or the chemistry between the actors. It's all too easy to imagine how things could go terribly wrong.

- Michael is now a forensic lawyer. Since he's on television, this means that he investigates and solves crimes all by himself with no oversight or any regard for proper procedure. He also interrogates bad guys until they confess to their wrongdoings. Half the time he gets bad guys to confess just by contradicting a minor flaw in their testimony, causing them to say something like "I just wanted her to shut up! I didn't mean to kill her!" for no good reason. Sometimes he also shoots people. Occasionally he's the judge.

- Taking a cue from The Office, the newest season will take the characters you love and remove all nuance, turning them into bickering assholes that trudge along rehashed storylines which rely on mindless conflict.

- Buster is stricken with a brain tumor. Every scene involving Buster consists of him looking out of a hospital window, crying, then knocking over a "Get Well" bouquet in anger.

- Michael Cera occasionally shows up as George Michael, wearing $500 shades and flipping through movie scripts. He frequently smirks or shrugs when he should clearly be delivering a line.

- After doing such a fantastic job the first time around, Charlize Theron reprises her role - not as Rita but as her character in Monster.

- Gob has given up on his magic shows and money making schemes. He now has a 9 to 5 job, a loving wife, and a newborn baby. Half the show will now be devoted to observational humor centering around how crazy it is that babies are hard to take care of. They wake you up all night! They poop in their diapers and you have to change it! They cry and you can't figure out what they want! They don't eat the things they should! The comedic well never runs dry. 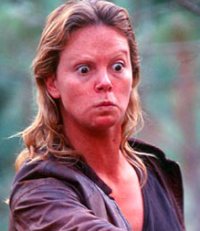 - To cut the workload by a considerable amount, all actors will learn to move and deliver their lines at 75% speed, and the show will be aired in slow motion.

- Tobias moves on from his Never Nude stage, gaining the confidence to see himself as others see him. He addresses his behavioral issues. Lindsay feels fulfilled. The couple mostly just stand together happily. When they speak, it is simply to address a misunderstanding or to offer reasonable alternatives to one of the other characters' madcap plans.

- Have you ever seen the Mythbusters? You know the younger crew, the ones that read their scripted casual chatter particularly poorly? The movie is going to 97 minutes of them overreacting to things off screen. We're talking the most braying, desperate yells of feigned excitement. Tons of pointing while asking "WHOA DID YOU SEE THAT?" Lots of high fives. Countless "WOOOOO!"s, and even a few shocked glances into the camera. In the 98th minute we will reveal what they've been reacting to -

- Lucille is no longer a physical person, but a cgi chipmunk. Her model is actually an early version of Theodore from the Three Chipmunks movie, and as such one side of her face is horribly scarred. The animation package is missing half of its assets, so Lucille just sort of slides around on the screen while her limbs cycle from outstretched to inside her body.

- As it turns out, it's much cheaper to just hire some bad actors to play repo men and follow them around with "reality" cameras to record staged confrontations. Paying the cast of the original series would have cost way more than this fat dude in a hot dog suit.

- Jeffrey Tambor will not be reprising his role as George Sr. In his place, that chubby guy from Balls Of Fury, Good Luck Chuck, and Take Me Home Tonight.