Loving You is Easy 'Cause You're Inanimate

Okay, now this is just ridiculous.I have never had sex with furniture. I admit, I've occasionally considered it. In my moments of weakness a particularly racy standing lamp catches my eye, or I've been drinking and I lower my standards to an overstuffed couch, or maybe I'm at that weird furniture shop that sells a chaise lounge that looks exactly like Keeley Hazell.

Come to think of it, the Keeley Lounge might have been part of one of my night terrors. The part right before I realize the thing with no mouth is watching and then the beautiful woman turns into Knife Mommy.

I think it is fair for me to assume that since you are reading this, and by deduction not restrained in a mental hospital, you are also a member of the club that realizes no answer isn't the same thing as "yes" when it comes to our furniture. For the record, no, I'm not counting the time you rubbed up against that chest of drawers and felt funny afterwards. A little credenza frottage never hurt anyone.

Boundaries like "don't have sex with a chair" wouldn't exist if there weren't a handful of pioneers out there willing to take their relationship with Ikea to the next level. Today we salute one such adventurous soul from Bellevue, Ohio, who dared to dream. Arthur Price then dared to act on that dream and made love to his backyard picnic table. 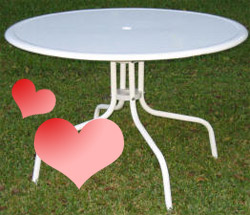 It sounds like an awkward position, but you go out on your deck with your overweight picnic table and try cowtable or ottomanstyle. The physics just aren't there for anything other than classic kneeling umbrella hole position.

When confronted with this overwhelming evidence, Arthur admitted to the acts on the DVDs and also confirmed that he "had sex with the table inside the home."

You have to respect that sort of commitment to the relationship with the picnic table. Things get a little boring, always out on the deck, always in the same position.

A guy like Arthur wants to spice things up, maybe flip the table upside down on the living room floor, roll it down into the basement and get kinky by unscrewing some legs, or just go up to the bedroom and try on different tablecloths. It's that sort of adventurousness that can really keep a relationship exciting.

I'm not going to sit here in judgment of Arthur. Quite the opposite, I applaud the amount of effort Arthur went to with his beloved picnic table.

A gentle soul like Arthur probably romanced the table before he took the relationship to the next level. He said the right things, overlooked its rust spots, and complimented its umbrella. He cooked a romantic dinner and then ate it on top of the table. He invited his parents over to have a barbecue with his picnic table. 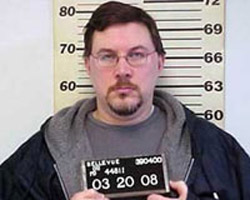 Arthur Price, victim of love.Arthur did none of these things, he refused to settle. He took his love from the bedrooms to the backyard and he wasn't afraid to do it all in plain sight of his neighbors and their DV cameras. He recreated the picnic experience with a sensual twist.

I know, I know, the "parents" were worried their "kids" might "see" Arthur consummate his love with the table. I argue that kids need to learn about the birds and the patio-ware sooner or later, but okay, I'll concede the point that kids shouldn't watch a man explore the eroticism of his backyard furniture. So why did the snooping neighbors record three DVDs before they handed them over to the cops? Were they just fans of his work? Were they going to start their own website?

Maybe it isn't Arthur Price that is the problem. Maybe we're the problem. We aren't on the inside looking out, we're on the outside looking in, watching a man share his passion with a table. We're recording three DVDs and then turning them over to the cops. While Arthur is out there risking the elements and a case of the ants, we're in our homes peering at him with scorn.

Arthur faces four counts of public indecency. When he enters the courtroom he is supposed to be judged by a "jury of his peers". I humbly suggest that Arthur Price is peerless.

May his days in prison be filled with Home Depot catalogs. May the guards forget to bolt his bunk bed to the floor.