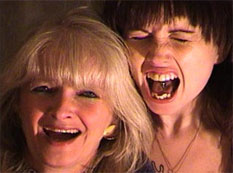 WAAAAAAAAAAAAAAAAAUGH?I am a semi-professional comedy writer. No, I don't write stand up routines, sketch comedy for late night cable access, nor do I contribute to collections of ribald jokes published on minimum grade stock and given as birthday presents to the illiterate by ignorant relatives. My job is to frequently and repeatedly cook up a pot of almost delicious low grade hilarity soup and serve it to you fresh multiple times every week. As such my observations about the world are neither stunning nor profound, but embody rather a sort of rushed everyman type of comedy. Horrible rehashed jokes don't just ooze out of my pores - the sheen you see is actually a pituitary problem I have that causes my body to secrete a lubricating jelly - they have to be kindled and stoked like a campfire set to ward off packs of werebeasts.

My mind is constantly sucking up any potential grist for the comedy mill. When I see a woman on the street carrying groceries it causes gears in my head to start churning up absolutely hilarious ten page long articles about groceries. Sometimes this is great, because it allows me to take things lightly that might otherwise upset me. Like the time I was struck by a garbage truck and my lower body was turned into a glistening paste. I still can't feel my penis to this day, but by the time they were feeding breathing tubes through my tracheotomy hole in the ambulance I had already composed a mental outline for a six installment series of dick joke essays that involved being crushed by a garbage truck. At other times I wish I could turn it off. On September 11th of 2001 as I watched planes smashing into the World Trade Center live on CNN I couldn't stifle the chorus of ass disease and recursive sex jokes percolating in my brain.

By way of an aside, let me try to get to the meat of where I'm going with this. I am a disorganized person with a weird and sort of sad fetish for poorly sorting objects. I have piles of burned CDs and games that occasionally topple to the floor with a crash. From time to time I like to sort through this pile of CDs to "organize it". Doing this involves shuffling the stack up in my lap or on the floor and then after painstaking deliberation over each individual CD I invariably end up restoring the precarious tower only in a slightly different order. Similarly I often feel the need to begin sorting through drawers of junk, taking every item out one at a time. I will start carefully replacing the objects in the drawer in a neat row, but after about three or four items I will become exhausted from effort and begin muttering and carelessly throwing items back into the drawer. Basically, I'm the world's laziest obsessive-compulsive.

Combine this low grade neurological disorder with my ceaseless need to make everything funny (if only to myself) and you've got the basis for this article. I sort things, badly, and I like to laugh about the things I sort. I invite you all to come with me on a journey of mild amusement and increasing irritation through the crap I find in drawers. There are mysteries to be solved!

Filing Cabinet Next to Desk 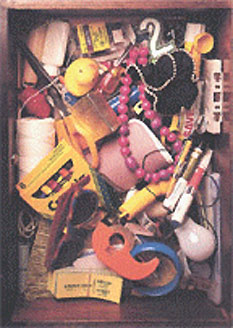 My drawers, cabinets, and bins could only hope to be this organized.

An impressive assortment of loose batteries that may or may not still work.

Miniature hats for mice and small rabbits. I don't know where they came from.

The security stickers from a CD by the hideous metal chick band "Kitty" that I don't think I even bought.

Almost thirty sheets of paper with an assortment of words written on them in alphabetical order, starting with "traipse" and ending with "quarrelsome". It is in women's hand writing.

A printed pattern for mouse hats.

Pieces of an oven.

A manila envelope containing slightly moist cigarette butts. Some are the brand I smoke; most are a weird Asian looking brand with green lipstick marks on them.

A photograph of a kettle in someone's house with semen stains on the edge of the picture.

Conclusion: A colony of ants has set up shop in my filing cabinet, accepting damp cigarette butts in exchange for crafted rodent accessories. Their queen enjoys writing words alphabetically. At some point in my life that I don't remember I had an intense fetish for kettle voyeur photography.

Plastic Bins Next to Desk

A Tupperware container full of an opaque creamy green fluid. When I opened the top I heard voices and immediately sealed it and returned it to the bin. May have been part of my grandfather.

One entire bin was full of sandwich toothpicks and miniature plastic pirate sabers with club sandwich residue clinging to them. I have not eaten a club sandwich in almost twenty years.

A sheaf of love letters written to someone named Candice by someone named August. They are quite graphic at times and one included the phrase "I want to run you down like a Cossack, my dear".

A filled out patent form dated 2001 for an item referred to as a "nun batterer", includes such features as "batter flow regulator" and "nun clamps".

One half of a clam shell with "FUCK" written on the inside in permanent marker.

Conclusion: In a past life my name was August and I was friends with George Gershwin, who was secretly fond of drawing racist caricatures. Together we must have eaten every club sandwich in Manhattan and had intended to ruin the Canadian economy of the mid-1930s by flooding it with forged currency. Things went south for us and in a last desperate bid to get help from militant Gershwin supporters I wrote "FUCK" on the inside of a clam and put it back to see. How these objects all made their way into the bins next to my desk along with the sentient green ooze will remain a mystery.

Chest of Drawers in Bedroom 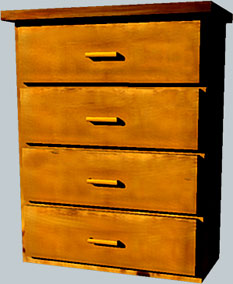 It's full of secrets.

Cross section diagram of a barracuda with a gigantic cartoon penis drawn in its mouth. Upon further inspection the penis does not appear to be added, but rather part of the original diagram.

A velvet coin purse full of toenail clippings from a man or woman who was at least thirty feet tall.

What appears to be a harmonica made out of gems.

A veritable holocaust of dead mice and small rabbits, most wearing hats.

A poem entitled "Rockets" that suggests the author had detailed knowledge of how modern rockets are designed and function.

Four pairs of relatively clean denim pants, although one pair seemed to be infested with some sort of mobile algae.

An unopened food can with the label removed and the word "Hazard" stamped on the side.

Conclusion: Something, possibly an earthquake or tsunami, placed this chest of drawers in our bedroom. It came pre-loaded with everything but the mice and the coin purse full of toenail clippings, which I of course put there myself. The clown wigs might belong to my girlfriend, but not the others.

There are so many drawers, cabinets, and boxes in my apartment that I could go on endlessly. I did not even get to the cardboard box that's moving slightly and hisses when I get near it or the sack in the corner that smokes when it rains outside and has "TECHNICAL BEANS: NOT FOR HUMAN CONSUMPTION" printed on the side. These are secrets best left untouched, or at least saved for such a time as I grow so desperate for ideas I risk losing a finger to sort through the hissing box.