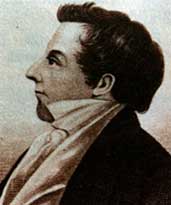 Joseph Smith sure was a looker!

Once upon a time, sadly NOT in a land far, far away, there lived a man named Joseph Smith. He wanted to be a rich man, so he spent the better part of his life searching for buried treasure. One of the treasures he claims to have found, buried in the depths of a cave in rural Pennsylvania, was a set of magical golden tablets which he says he spent a large amount of time translating from gibberish language to God-fearing English. He had to wear special glasses to do this because the writing on the tablets was only visible if you had those crazy glasses on. To everyone else the tablets looked like plain old rocks. These magical plates, Mr. Smith said, do not exist any more because the angel who led him to them came down again from heaven and whisked the plates away "into eternity." Hmmmm...

Joseph Smith said that the writing on those tablets translated into the masterpiece of fiction we today know as "The Book of Mormon." It hit the stands in 1830, and a lot of people who read it set out across the country to convert to Joseph's religion. It seemed pretty good to them; you don't go to hell for sinning or blaspheming, but your heaven isn't as good as the people who don't sin at all. The Catholics who heard this were excited because they had already assumed that they were damned just for living, so a lot of them converted. Good deal!

The people who knew that Mormonism was just a creepy cult didn't want Mormons living in their town, so Joseph packed up his shit and led an exodus of fervent cultists across the country, moving from town to town. He didn't have very good luck but finally settled down for awhile in Bumblefuck, Illinois. In 1844 he made a pathetic attempt at running for the US presidency, and he carried on numerous affairs with women other than his wife. WHAT A WINNER!

His wife eventually found out that he was giving all of these psycho Mormon girls ye olde love rod on the side, and she beat one of them nearly to death with a broomstick. Smith thought awhile and eventually came to the conclusion that Mormonism should allow men to have multiple wives. What a great idea! God wants men to have lots of kids, so multiple wives was the way to go, right? His wife was very upset when he told her of his new revelation and even more upset when he proposed to the wives of other church leaders, but a Mormon woman's place is in the kitchen, so she shut her mouth as her husband banged away.

Another thing that he apparently thought would be a good idea at this point was to make a rule about underwear. Yes, underwear. He created a mystical, God-sanctioned clothing item called "Temple Garments," which were holy underoos that could not be taken off. EVER. I don't even want to think about the implications of this rule but I am glad that I am not Mormon and that no one I know on a very close personal level is Mormon, either. Temple Garments indeed. That must get really fucking gross, to say the least. I can just imagine his announcing this to a large crowd, "Ok folks, God says that thou shalt wear this underwear and you can't ever take it off. Cool, huh? Now, who wants to have sex with me?"

All through this craziness, Joseph Smith was getting arrested over and over again. Eventually, a mob of people came to him while he was in jail and killed the guy. Oh well, what a shame, probably all for the best. His crazy followers migrated across the country to the lovely city of Salt Lake, Utah, and to this day it is a haven for people who believe in magical tablets, magical glasses, and polygamy. USA! 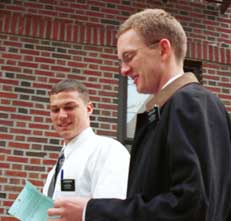 Guess who's knockin' on your door?! HINT: IT'S THE MORMONS!

Unfortunately for the world, the cult of Mormonism is one of the most predatory and governmentally sanctioned in the world. Under the seemingly innocent guise of Christianity, these people go from house to house in hot pursuit of lost and vulnerable people whom they can convert to their wacky pseudo-religion. In fact, it is REQUIRED that before boys come of age they take a year and travel around the country witnessing, trying to get people to convert to Magic Tabletland Happyfuntime Religiosity.

They advertise on TV, saying, "Call this number for a free copy of the Book of Mormon, another testament of Jesus Christ." Another testament of Jesus Christ? So all of the Christian people say, "I like Jesus! I'd better call and see what else that guy had to say!" Or, if they're me, they cover their eyes and say, "NOOooo!!! The Mormons!! Make it stop!!" But it dupes those poor Christians every time into thinking that the Book of Mormon is in some way related to their religion or is in fact, something legitimate. Soon they are wrangled in and end up paying 10% of their yearly net income to the Mormon church. Poor Jesus-liking saps.

One day, after seeing that commercial, I made a mistake. Wait, I know what you're going to say. You're going to say, "But Emily "Integral" Reigel! You NEVER make mistakes!" Well that's true, but this was a mistake and I made it, I guess. I ordered a copy of the Book of Mormon, just out of curiosity. It was the worst mistake I've ever made, beating out even that mistake I made with the monkey with ass-herpes. But that's another story altogether.

Several days later, the Book of Mormon arrived in my mailbox, a deceivingly small package of lies and propaganda. I opened it and read the pamphlet that they had sent along with it, part of which read, "Look at the following passages to SEE PROOF THAT JESUS CAME TO AMERICA!" I looked, and all that was there was some crazy part where Jesus was talking to his disciples or whatever and said something to the effect of,

"AND LO, I MUST GO NOW, FOR I HAVE OTHER FLOCKS TO TEND."

That was it. Basically the Mormons insist that Jesus came to America to teach the Native Americans about Jesus. Or something. I don't know or care whether he did or not, but that book contained the most inaccurate history of the Native American tribes that I believe exists anywhere. And that includes the histories written by the Spaniards, who single-handedly wiped out a large number of their population. GO MORMONS GO!

But the misery did not end there. The phone began to ring off of the hook. This was odd, because I hadn't given them my number when I ordered the book. I asked them how they had gotten it and they said that they had looked it up and, "We hope you have enjoyed the book of Mormon and we have a video that we'd like to give you. Can we come over to your house?" Can they come over to my house? The Mormons? NO! I do not think that that would be a good idea at all. No. 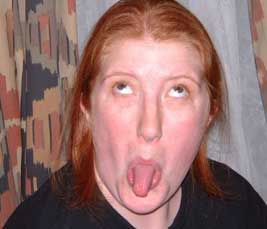 Oops, I accidentally searched for "moron." OR DID I!?!

Two weeks after receiving the book, I came home from class to see two Mormons standing outside of my door. When I went to the door, they asked, "Are you Emily?" I replied, "No, I'm her room mate. She won't be home until VERY LATE TODAY. Actually, I THINK SHE MOVED SHE WILL NEVER COME HOME EVER AGAIN EVER EVER." They asked me if I had ever considered the Book of Mormon and I replied that I was Jewish. This seemed to satisfy them, so they left a couple of pamphlets with me and walked away. Whew. That was close... TOO CLOSE!

Those crazy Mormons sure are crazy. For some reason there seem to be an abnormally high number of the kids witnessing in the area where Rich and I live and they can frequently be spotted walking alongside the roads. It is always a great challenge not to hit them with the car, but I don't want the insurance rates to go up.

I was at the post office the day before last, which always has a long-ass line that takes 40 minutes or so to get through. Behind me were two of those Mormon kids, and I just knew that they were going to seduce me with their sexy Mormon ways while we waited to mail stuff. Dammit, I was right. The conversation progressed like this:

MORMONS: Hey, how are you today?

ME: (turning around cautiously) Fine, thanks. (turned back around)

MORMONS: Excuse me, we were wondering whether you might have time to talk a bit.

MORMONS: Have you heard of the Church of Jesus Christ of Latterday Saints?

ME: Yeah, you guys are the multiple wives and magical tablet people.

MORMONS: Well, to some extent, but have you heard that Jesus came to America?

ME: Oh, yeah, to teach the Native Americans about magic glasses and polygamy?

MORMONS: He came to spread his message.

ME: His message of magical glasses?

ME: So you want me to buy your magical glasses, is that it? Well I don't wear glasses, mister.

At this point I think they took the hint and left me alone. Silly Mormons.

The thing that bothers me the most about the Mormons is not that they exist (although that does bother me) but the fact that they try to pass themselves off as a "legitimate" religion, as much as you can apply that word to organized religion in general, I guess. They are a cult, and if they just came out and said, "Hey, wanna join our creepy cult?" I'd have a lot more respect for them. But the fact that they're like, "We like Jesus too, so join us!" makes my head explode. *BANG* there goes my head.

Nevertheless, people continue to convert to Mormonism at an alarming rate and if I were more superstitious I would definitely believe that that fact is a sign that the world is coming to an end. There is no way that so many people could be that stupid. The Church of blah blah Saints has 10 million members today (TEN MILLION), and that's a gosh darn lot of people we're talking about. 10 million people. That's more than the number of people living in New York city. DAMN.

Well, I guess as long as there are dumb, vulnerable people there will be groups to prey on them. I feel sorry for the children caught up in the whole thing because they end up being brainwashed from a very young age to "accept Joseph Smith as a prophet," etc. All I can do is decide not to be one of those people and try to prevent those around me from doing so themselves. IF WE JOIN TOGETHER WE CAN PREVENT THIS PLAGUE FROM SPREADING! WE CAN MAKE A DIFFERENCE!! Yeah. Alright. I have to go kneel before the mud statue of the Goddess Spl'u'atu and offer her my daily 1/8 of my liver now.