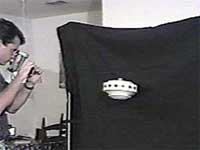 Mankind has always feared attacks from outer space since the first day outer space was invented by a Greek philosopher named "Hemmeroiderhese" or something stupid like that. They were sitting around their Greek temple and eating Greek food when Hemmeroiderhese looked up into the sky and began to think.

HEMMEROIDERHESE: "I doth propose that if there must be sky aboveth us, then there must be sky aboveth that."
PHILOSOPHY ASSISTANT: "Oh, you mean there must be space? Out there? You're saying there's space out there?"
HEMMEROIDERHESE: "Merrily, yes I doth claim that this space out there be known as 'Outer Space' and exists above us at all times, even when we are sleeping, eating, or be consuming grog on the Jolly Roger."
PHILOSOPHY ASSISTANT: "Okay, let me see here..." (writing on a piece of parchment, which was back then known as "maize") "Alright, I got this down, you just invented Outer Space. Let me sign this... and you're done!"
HEMMEROIDERHESE: "Yarrr, and if there be outer space out there then maybe there be landlubbers ready to plunder our loot! YARRR!"
PHILOSOPHY ASSISTANT: "Hey wait a minute, you were talking like a Renaissance Festival guy at the beginning but now you're talking like a pirate? Aren't we supposed to be Greek?"
HEMMEROIDERHESE: "NEIN!"

From that point on, mankind learned to fear the unknown, aliens from an alien world in alien-owned outer space. The main problem with aliens is that we, as a simple and ignorant species of idiots, can't figure out how to make ourselves safe from this menace from another world. For hundreds of years now, our solution to any conflict revolved around making the conflict explode. If, for some reason we weren't able to make it explode, then we'd settle for either stabbing it or beating it to death with rocks. Outer space and its inherent alien menace presents us with a problem that cannot be solved by these conventional methods. I mean, how do we blow up alien planets or somehow create a knife big enough to stab their entire planet? There's simply to way for us to strike back at these invaders, and as a result we're forced to play defense against a seemingly limitless supply of attacking UFOs which are equipped with various pastel-shaded ray guns. 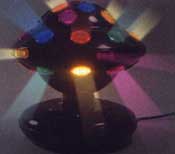 Although the recent reflection upon 9/11 brought our country together and allowed us to realize that we can bomb the sand out of some unemployed country's teeth, there's absolutely no way for us to fight the alien attack force which is slowly but surely spreading across this great world like some kind of rash on a basketball made of human flesh. Much like in the movie "Signs," where Mel Gibson and his costars were assaulted by a shitty storyline and potentially deadly plotholes, the invaders from outer space are starting small while they prepare for the massive attack:

India villagers blame UFO for attacks - It comes in the night, a flying sphere emitting red and blue lights that attacks villagers in this poor region, extensively burning those victims it does not kill. "It was like a big soccer ball with sparkling lights," said Kalawati, who uses only one name. "It burned my skin. I can't sleep because of pain." "People just block the roads and attack the police for inaction each time there's a death or injury," said Amrit Abhijat, Mirzapur's district magistrate, who claims he has captured the UFO on film.

Each night, as you and I sleep soundly in our beds made out of gold and uranium, India's population of filthy Indians are under attack by what sounds like hovering disco balls of flaming doom! How can you possibly rest at night knowing that these future college engineering TAs and systems administrators are being burned by Technicolor assault balls? I mean, yeah, there's also that thing going on between them and Pakistan, but I'm sure that will all be resolved once one of them throws enough exploding items at the other. That little event takes a backseat to this frightening UFO phenomenon, one we are completely powerless against. For example, have you ever seen a movie where the alien intruders were successfully defeated by the use of conventional bombs? That'd be pretty goddamn silly if an army from outer space (or even further) has such advanced technology to create an armada of physics-defying spacecrafts, yet they're vulnerable to a metal bomb full of gunpowder or napalm or atoms or whatever science is currently using to make shit explode.

ALIEN LEADER: "Ah ha! Now we're on Earth, let us assault Akron, Ohio! Once Akron falls, the rest of the major cities will tumble like dominoes! Ah ha!"
ALIEN FIELD COMMANDER: "Uh sir, our ships are all being blown up."
ALIEN LEADER: "But... how is this possible? Our scout, who stole all that Earthling intelligence data, assured us that the humans were only equipped with large gray tubes that launched slow-moving spheres which caused you to either fall down or blink repeatedly when hit! Sphere which could be easily avoided by either jumping straight up or ducking!"
ALIEN FIELD COMMANDER: "Like I told you 50 times already, that wasn't our scout, it was some 13-year old kid with a Nintendo ROM site, sir. You were simply reading his ICQ messages to his friend, 'l33t-b1s0n'."
ALIEN LEADER: "HOW IS THIS POSSIBLE?!? I had this invasion scheduled for like two months! We had everything all set and ready to go and now this? Why does crap like this always happen to me?"
ALIEN FIELD COMMANDER: "You're just having a bad year, it's nothing big. You'll recover."
ALIEN LEADER: "My friends back home are all going to give me shit about this. They'll be like, 'oh, how many planets did YOU capture this year?' and I'll be all like, 'well I would've gotten one if it wasn't for my faulty scout reports,' and they'll all be like, 'okay man, whatever.' I don't know why I bother anymore."
ALIEN FIELD COMMANDER: "It's okay, sir. Even though we're both of the same gender, would you like to have sex?"
ALIEN LEADER: "Yeah, sure, why not."
ALIEN OTHER GUY: "Sir! I think we just saw another one of those V-shaped flying things that drop the exploding stuff on us! It went by the rearview mirror and Dave said it looked really fast!"
ALIEN LEADER: "No! Not in the middle of my alien gay sex!" 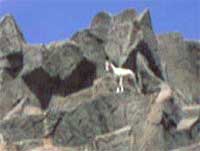 As you can see, this idea is simply preposterous; first off, gay aliens would be a lot more ready and well equipped before attempting to take over our planet. Have you ever seen a homosexual man pack luggage? They take like everything not nailed down, just to make sure they don't forget something or arrive unprepared. And if you're wondering why I've been watching gay men pack suitcases, don't ask. Let's just say each person has their own little fetish and mine happens to be watching homosexual people get ready to travel. I don't make fun of your Anime dickgirl fascination, now do I?

Regardless, our inability to "think outside the box" and "figure out a way to destroy all space" has led us to this situation we're now crotch-deep in. Tell me this, intelligent American scientists and world leaders: once you're being burned and generally annoyed by these floating disco balls from hell, how do you plan on dropping bombs on the planet they came from? First off, if you drop a bomb in outer space, it will just float around until you run into it and blow yourself up. Secondly, it's probably impossible to sow together a giant rope to lasso their home planet and pull it close enough to Earth so we can send over our bombers. Thirdestly, while we're sitting here and using our pencils and slide rules to calculate the pi of tangent or whatever, taxpaying citizens of India are getting molested by large red volleyballs!

So what are our available solutions? Well simply put, I think we should leave India the hell alone and let them continue their strict "anti-UFO" diplomatic policy they are enforcing. After all, I can't see any problem with their current response to this unidentified flying ball thing that tries to burn you while other people claim it's a large bug (UFBTTTBYWOPCIALB).

Villagers are unconvinced. In the most affected area, the Mirzapur district, 440 miles southeast of New Delhi, people have stopped sleeping outdoors despite the sweltering heat and frequent power outages. Villagers also have formed protection squads that patrol Shanwa, beating drums and shouting slogans such as, "Everyone alert. Attackers beware."

Yes, that is correct, they have responded to this alien menace by shrewdly electing to form "protection squads" that beat drums and shout slogans such as "Everyone alert. Attackers beware. Buyer Beware. Half Off All Lattice at New Dehli Home Depot." It's this kind of "outside the box" that has made India the leader in UFO defense since at least, oh, last March or so.

With this creative and inspiring solution in mind, I call out to the leaders of the United States government and nations across the globe: let us not smite our enemies with bombs and larger bombs any longer. The true path to security and safety lies in the protection squad and their eternal drumbeats of joy / anti-aliens. If India can defeat floating discoballs this way, perhaps we, as a race, can finally learn what the Greeks could never figure out: how to defeat the inherent evil of outer space.

Tales from the Crap

Zack "Guest Emasculator" Parsons here with an all new and slightly improved Something Awful Story Time! This week we take a look at all of the pulpy melodramatic vampire crap overcrowding shelves at a bookstore near you. Can you guess the handsome antagonist of this week's "Darula"?

When he discovered that his beloved Sexybelle had been killed by Union soldiers in Atlanta he forsook God and returned to his ancestral home in Transylvania. Soon he discovered that somehow forsaking God had caused him to become a vampire, and he began to hunger for blood. He could eat cow blood or rabbit blood, sometimes he ate bird blood, but it lacked the zesty full-bodied flavor of human blood. His favorite was the blood of an adult human female, and he indulged in it at least once a week by traveling to the nearby village and feasting on some poor unsuspecting wench.

Basically it's a cross between Dracula and Anne Rice's horrible shit ONLY TEN TIMES SPOOKIER! I am not joking at all! This story is so spooky it will wait until you are dead and then dig you up and spook your corpse and turn it into a ghost that goes and spooks your grandfather's corpse and then turns it into a cyclops! Head on over and give it a read, IF YOU DARE!