Hello, all: I’m back again to inform you of the waking, bleeding nightmare I am forced to endure once a year: being in America. As much as I enjoy my time here in Nippon, every holiday season I am forced to return to my childhood home of Lisbon, Ohio to endure the Traveler’s Check-distributing wrath of my mother and stepfather. Sweet kami-sama, how did I ever survive 25 years in that basement? Of course, the students at the school where I teach English took it very well, as this time around they are much younger than my usual class. You see, I usually teach 7 year-olds, but the latest school year brought me a new group who was simply too immature for the complicated storytelling and mature tree-jumping of the anime series Naruto - so much so that they would loudly complain whenever I brought in taped copies of the program to assist me in teaching rudimentary English and the way of the ninja. Gladly, the new group of four-year olds I tutor at Sakura Yochien absolutely love the show, and often guess the plot twists before I can! Oh Toshi-Kun, your encyclopedic knowledge of the original manga will be the death of me. 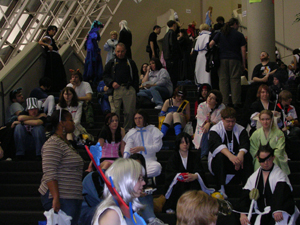 Can you spot the inaccuracies in these costumes? I sure did!Most of you may notice by this point that I am not wowing you with the prose that has made my blog #17 on DDRFreak.com’s “Top 80 Blogs, 2003.” This update is not deserving of the clever wordplay or 8000-word updates as seen in my “Legacy of the Bandai Wonderswan” feature. No, the subject of this post is so ugly, even I was debating changing the topic and writing my long-awaited “Mistranslations of the Contra Series” article (heh, maybe next week). Minna-san, sadly I must speak of American anime fandom.

It’s bad enough when a country like the United States has the audacity to hold an anime convention; what’s even worse is when a supposed “friend” asks you to go to one with him. This “friend” was Rob. He picked me up at the airport, where I was four hours late because a certain stewardess on Tokyo Airlines refused to believe me when I told her it was legal to smoke cigarettes on Japanese airplanes. I tried to find an episode of Getbackers (frankly, it makes 24 look childish in comparison) where this happened so I could cite precedent, but that particular episode was nowhere to be found on my laptop. When I finally let the pilot (apparently the stewardess couldn’t fight her own battles) win his silly argument, I scratched an alchemy circle on the back of the seat in front of me with a stale piece of Pocky I found in my tote bag. Let’s hope, for their sake, that it didn’t work.

”"I'm not used to being liked. Being hated, on the other hand, is quite familiar."
- Gendo Ikari, Neon Genesis Evangelion 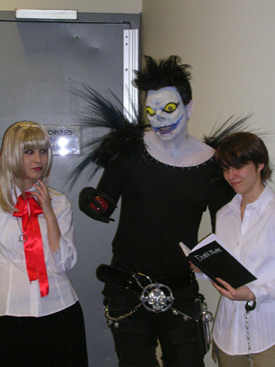 Feh, they're probably only up to episode 10.After I met up with Rob, he asked the unthinkable: “Do you want to hang out at Ohayocon after Christmas?” I wanted to knock my luggage out of his hands, right then and there. But I’ve always felt a little sorry for Rob; he’s had his nose to the educational grindstone most of his life, going to college and then… graduate school?! While he was off doing that, I built up a pretty nice DVD collection that now lines the walls of my 20 by 20 ft. flat (most people don’t even have bedrooms that big) in Akihabara. Hey Rob, let’s see the gaijin at MIT come up with anything as good as Sony of Japan! So, needless to say, I took pity on Rob; after all, this is the guy who thought Soultaker was a movie and not a 13-episode series! Which is why, after Christmas, I asked my asshole stepdad for 400 dollars, and soon we were off to Columbus for what would become the worst weekend of my life.

Ohayocon, like anything American having to do with anime, is a sick perversion of the art form. As much as it pains me, I must speak of the countless tragedies I faced that weekend, each one like an atomic bomb dropped on the Hiroshima of my heart. I have attended many conbatsu (conventions) in my homeland of Japan, each time bringing away priceless memories and rare swimsuit figurines of Cardcaptor Sakura. Not this time. When Rob and I entered the Columbus Hyatt, I was shocked to see an immeasurably long line of eager “anime fans” waiting for registration. I jabbed Rob with my elbow and stated, “Heh, looks like Drag On Ball Z is really picking up over here, eh?” But secretly, I was terrified. Terrified that a single member of this misguided rabble could possibly match the sheer depth and breadth of my manga collection. It was then I decided to shake off these fears by going up to our room to play Osu! Tatakae! Ouendan! on my purchased-in-Japan raspberry-colored DS Lite. That’s our superior version of your Elite Beat Agents, a title I cannot even think of without bile rising to the tip of my throat. Of course, Rob asked if I wanted to hang out with the other people to check out their costumes, to which I curtly replied, “Baka.”

"As long as there is trust, there is betrayal." -Battle Royale