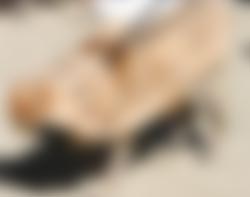 The famous Dumpshorts Photograph of the Sasquatch. A group of searchers led by veteran Sasquatch expert Nute Video Jr. has located various hairs and fragments of scat they believe to belong to the Washington Sasquatch. This same beast is the one believed responsible for last summer's rash of overturned trash cans and may be linked to graffiti in downtown Sashshasquma that spoiled the endings of several Harry Potter books.

The expedition, which set out in late December, was supposed to have concluded on the 32nd of January. Video Jr. has stated that he plans to continue to search for the Sasquatch until it is found. "We have not failed to find a Sasquatch," Video Jr. wrote in an email to the PNAC mailing list, "we are simply experiencing delayed success."

Video Jr. points to the feces and hair as, "signs that we're headed in the right direction" and asserts via skywriter that the scat has an unearthly spicy sent, "born of no human bowel". He suggests that the only possible course of action now that the search is underway is to stay the course. "We started it and now we have to finish this search or we dishonor our profession and the thousands of lives lost," Video Jr. explained in a birthday card.

The Babyface Fish resembles the Moose Creek Childeel. Fishermen in the North Dakota White Lakes area were in for quite a surprise when they reeled an unusual fish into their boat. Fisherman, amateur cryptozoologist and acquitted child pornographer Lupus Bolliver described the scene in an email to PNAC:

We were fishing river carp with dynamite in the White Lakes on Tuesday and because its winter and all we weren't getting a lot of fish. We were about to pack it up and head home when John [Herpes] got a tug on his line. It was a big one, we knew right away, and as he reeled it in the damn thing fought like no fish he'd ever caught before. After about twenty minutes he finally managed to get it in net range and I hauled it in. The fish must have weighed fifty pounds, but the real surprise was that as I turned it over I saw its face. We hadn't just caught some monster carp, we had caught the legendary Babyface Fish.

It had a fat baby face with curly blond hair and rosy red cheeks. It was blinking a lot and sort of trying to talk, but we couldn't understand a darn thing it was saying. John tried to kiss it, but it didn't react well to that and it started thrashing around the boat. I went for my camera, but by the time I got it turned on the darn thing had flopped right out of the boat and back into the lake. I couldn't get a picture, but luckily I had the good sense to mark down the GPS coordinates.

The White Lakes Babyface Fish has been spotted more than 500,000 times since the early 1980s, when it is believed a visiting Japanese man might have impregnated a fish, creating the horror. Aquatic cryptozoology expert Pickle Taintrub, currently deployed in a hunt for the Haunted Submarine of the Great Lakes, plans to lead an expedition to the White Lakes some time in 2007. Stay tuned to PNAC for further updates.

New Searchers to Be Deployed in Effort to Capture Jersey Dogman 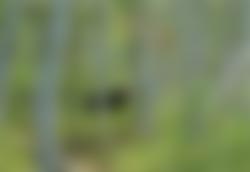 One of four photos in the Shirtlift Dogman set. Cryptozoo expert Douglas Shirtlift has requested additional support from New England cryptozoologists in his efforts to capture the sassy and elusive Jersey Dogman. He and his crew believe they have the Dogman encircled inside a perimeter of approximately 800 square miles and they need additional searchers to drive the Dogman towards their traps.

The Dogman has been reported in the New Jersey area since 2003, when civilians claimed they saw a brown man with large white eyes and floppy ears lurking in the woods. Since then the nocturnal Dogman has supposedly appeared to threaten dogs, frighten cats, tear open outgoing Netflix envelopes and peer through windows ominously.

Cryptozoologists drawn to the sightings reported seeing the Dogman earlier this year. One member of the PNAC mailing list, amateur HAM radio operator and veteran cryptozoologist Malted Moroccan, wrote of a close encounter with the Dogman in October:

It had the gait of a man but with brown-colored arms nearly as long as its knees that looked delicious. It wore a crude t-shirt with an image of itself on the front and appeared to be wearing diving goggles. Its face was shaped like a pyramid and it was wearing shoe boxes on its feet. When it attempted to use a calling card at a public telephone I ran for help. By the time my team returned to the location it had disappeared, although we were able to recover a wrapper for a Snickers Fast Break bar that may have traces of its saliva. We'll be holding a fundraiser so we can send it off to the lab to test for DNA.

Douglas Shirtlift's team has produced several photographs (see image) of the Dogman and Douglas now claims that the creature is trapped. "We should have brought more searchers, but now that we are committed and we have him right where we want him I think it would be disastrous to pull out now. We need another 2,000 searchers to help us get this menace into the snares so that he can be studied by science."

Tracks and scat found in the wilderness indicate that the Dogman may have five eyes and is almost certainly made out of chocolate. Cryptozoologists wishing to help are advised to contact Shirtlift's "Dogman Desperados" on the forums. Over a billion dollars have been spent by Shirtlift's team to date on several very expensive cars and a fence 800 miles long that will be completed by 2018. Shirtlift has requested an additional 300 dollars for a pith helmet with a large topaz gem in the front. 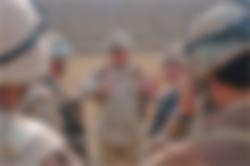 Tokyo Sexwale trains new cryptroops. PNAC's annual Cryptozoology Daze in Christhole, Nevada has been a seemingly wild success. Curiosity seekers from all over the country headed to the town to witness an exhibit on cryptozoology and learn about how to track and trap various crypto species. The day's itinerary provided a broad foundation for trainee cryptozoologists and included:

Trainees enjoyed sandwiches from Quiznos and a free pin declaring them official professional cryptozoologists. But not everyone was happy with the results of this year's training.

"30 brigades sounds great," commented Evil Elliot on his Evil Elliot and Goober Show podcast, "but the truth of the matter is none of these new brigades can search for even a simple Yeti without embedding more experienced cryptozoologists. If they're not willing to stand up and find legendary creatures on their own then what are we doing in Christhole?"

PNAC co-founder and sponsor of this year's event in Christhole, Bodega Maximus, was not so quick to dismiss the trainees.

"They require in-the-field experience in hunting down sasquatches and devils. Once they've got the hang of it and they have their first few blurry photos the thrill of the hunt will take over. They'll be organizing their own search parties in no time and they will help us fill the Cryptozoo Museum in Danville."

The museum is open to the public from 9 AM to 5 PM Monday through Friday and is expecting its first exhibit to arrive sometime in February, after the Jersey Dogman or the Sasquatch has been caught.