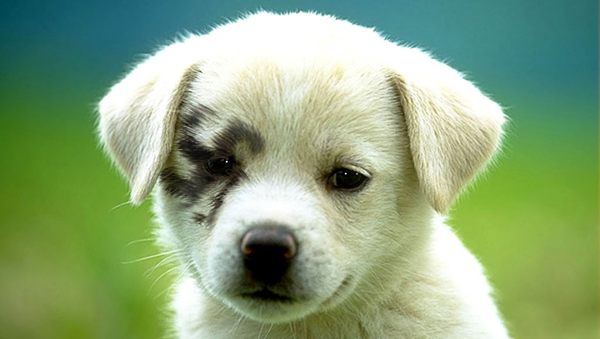 People often ask me, "Why would anyone in their right mind buy a dog with an explicit swastika pattern over its right eye?" And I tell them that when your little girl's mommy dies and you let her pick out a puppy to try and heal the pain, there's no way you're telling that kid "no." Even when the people at PetCo make you sign a waiver stating that they are in no way responsible for any harm that may befall the owner of an animal that bears the universal symbol of evil on its fur. Their words, not mine.

Though I probably shouldn't have let her name it. You know, kids are simple-minded; when I had a dog, it was covered in spots, so I named it "Spot." Our new puppy's covered in blond fur, and the first name that pops into my Madison's precious little head is "Blondie." Two days later my pal Larry tells me that's the exact same name as Hitler's dog! The exact same name! Sometimes ignorance is bliss, Larry.

I have to admit, the attention was great... at first. The TV stations were all over us. Footage of Blondie tearing apart a paper grocery bag followed the weather every night on the local news for three whole weeks, finally knocking that water skiing squirrel off of his high horse. And as a recent widow, I'm not ashamed to admit that this whole Swastika Dog craze was getting me more than my share of attention from the ladies. I only had to include a picture of Blondie on my OK Cupid profile (screen name: recentwidowcadillac68) and women were beating down my door.

But really, I was second banana in the Blondie show; they'd show up, we'd exchange a bit of small talk, and most of the girls would end up smelling Blondie's face to make sure I didn't just smear some Nazi logo into his fur with shoe polish. Then, with the confirmation that Blondie's swastika was truly an inborn trait, they'd be off, leaving me with nothing to do with my Saturday nights but sort through the ever-growing pile of hate mail.

If one thing hurts, it's all the name-calling. I am not a racist. In fact, I'm the last person who you could call a racist. I enjoyed eight fantastic seasons of the Cosby show, and have seen the Sinbad movie "Houseguest" at least three times. So I really don't appreciate it when you smart-asses yell "Heil Hitler!" out of your car windows when I'm taking Blondie out for a walk. And you know what? It's impossible for a dog to be racist. Just think about that for a minute. My Blondie would bark at any mailman, regardless of his Jewish ancestry. I have sent multiple letters of apology to Mr. Weinstein, and yet he still refuses to deliver my mail while on his route. Looks like that Mailman's Creed isn't so watertight after all -- eh, Weinstein?

Did you ever have an 87 year-old veteran spit in your face? I have; and I don't recommend it. This is what happens when you try and bring Blondie into the outside world to show everyone that he's not so bad. Maybe I need to brush up on my politics, but I had no idea our tax dollars go towards getting sad, old men boozed up at the VFW so they can drive over to my yard and pick on a defenseless dog. Maybe I shouldn't have invited the general public onto my property for a meet and greet, but when Sunday began I had no idea it would end with me turning the garden hose on a group of senior citizens. And you know who looks like the bad guy in all of this?

That's right. Not the dog who brought so much pain into my life.

But you know what? I'm not going to change just because a bunch of small-minded idiots can't accept a poor animal that, through sheer chance, was cursed with the iconography of history's greatest monster. Oh yeah, this would be the perfect chance for me to shave my little mustache, wouldn't it? You'd love that, wouldn't you? Well, let me tell you something. Charlie Chaplin was the greatest comedian to ever exist, and I've worn this facial hair for the past 20 years just to honor him. And isn't it just so perfect that "Hitler Guy" (yes, I've heard whispers at the grocery store) ended up with his very own "Swastika Dog?" I'm more than aware than the irony. But I'm stronger than that. I'm going to deal with the hand that God's given me.

Now, if you'll excuse me, I have to get back to work rebuilding the portions of my living room burned down by Tuesday night's angry mob. Good day to you and yours.

– The Owner of Swastika Dog