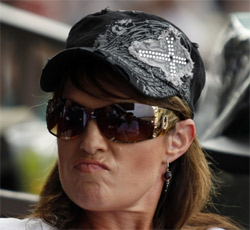 Reality TV host and blogger Sarah Palin is running for something. Nobody is quite sure what it is she's running for, but everyone is happy that she is back in the game, astride a motorcycle, literally riding for her concept of freedom. With no stated goal other than to appear, like a magician's assistant, she has embarked upon a tour, surely as portentous for our nation as Sherman's March to the Sea.

It begins in the Northeast, leading me to wonder which city of New England, where her approval rating hovers around the same level as approval for being violated with a petrified hobo turd, will she choose to burn first.

The political pundits, who refer to themselves as a "chattering class" even though the sound they make is more of a wet gurgle, hypothesize that Sarah is preparing to run for President of the United States. She is certainly equipped for the job: sharpened canines, forward-facing eyes, and the ability to repeat words. These skills have served past (and current) Presidents quite admirably.

There's also a void in the roster of GOP Presidential hopefuls just the right size for a spiteful idiot of Sarah Palin's stature, an aggrieved ignoramus incapable of critical thought, but full to the brim of her goofy hat with charming colloquialisms concealing the romping id of a toddler or hardcore drug addict. Santorum would fill the same hole, all the Republicans need is the sort of loathsome degenerate who preaches strict Christian values and then gets hate-hard over the thought of fracking fluid in your baby bottles and prisoners of war gagging on rags. Lucky for Sarah, Santorum keeps oozing out of that GOP hole and pooling on the floor of the debates.

Sarah sees an opening. America has been destroyed. Our nation is in Obama-wrought ruins. Our economy collapsed because someone mentioned the job creators without realizing their taxes have steadily declined under Obama. The premise motivating conservative voters is that Barack Obama has operated as an extremist, a communist, who literally hates America and has set about destroying it.