After watching a wonderful documentary by the indie filmmaker known as Borat, I had an uncontrollable urge to get out of my country and see the world in all its glory. But it was raining. However, there are some awe-inspiring individuals out there who have braved the elements and frequent social contact to trek to pastures new. This article celebrates those who have taken the opportunity to jet around the globe in search of answers to their most burning questions. Unfortunately, most of these questions were pretty retarded. Here's a bunch of stories about dumb tourists courtesy of the forum goons. 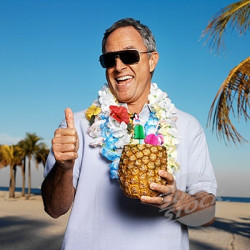 I spent the last three weeks in New Orleans volunteering my time with Common Ground Relief down in the Lower 9th Ward. We had a steady stream of tourists coming by in tour-buses to ogle an art exhibit next door or to take the 'Katrina Tour'. I sometimes got assigned to 'Tourist Duty' which meant I'd sit by a table with a donation bucket and our big, fluffy dog and try and get some donation money out of 'em (Common Ground runs on donated money and time)

Anyways, this family comes by the day after the Sugar Bowl game (Utah Utes vs. Alabama Crimson Tide). They're from Utah and are decked out in their Utes garb and Mardi Gras beads. They ask me some questions and then one of 'em drops this gem:

"We talked to some residents down the block. One guy was telling us how he waited 5 hours in line to get into the Superdome before the storm and how it was misery and squalor for days on end. I dunno...I had a great time in there last night!"

A stupid tourist at a Civil War re-enactment: "Why did they always fight their battles at National Parks?"

Said by me to a teller on the London Underground:
"What time's the 8 o'clock train?"

It took me a full half minute to understand just why everyone was laughing.

I work at a hotel in Halifax, Nova Scotia. Last summer when the CDN dollar was worth more than the American, there were many problems with American tourists not realizing this fact. Many arguments and accusations of us "ripping them off" were flung around. Because apparently there was no possible way that the Canadian dollar could be worth more.

A business man from Dubai asked me to call him some "company" to spend the night with him. As a concierge, I can't officially call one so I told him to use the Yellow Pages and look up escort services. He did, and the ugliest woman I ever saw came through the lobby about 30 minutes later, and left again after about 25 min. Shortly after her departure he came down and threatened to kill me because she was ugly and wanted him to pay for her cab and time spent.

"So, about that Hitler guy. Is he still alive?"

"Why are there so many Asian people living here?" Spoken by my aunt In Chinatown San Francisco.

She was generally confused.