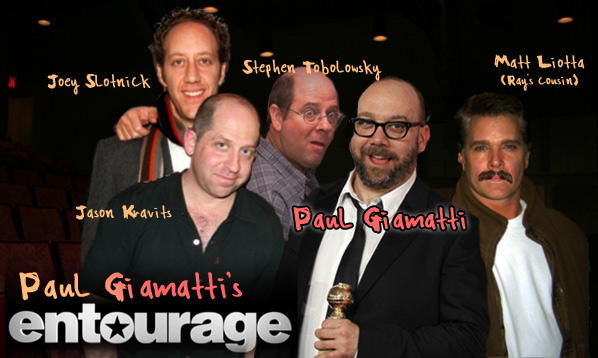 
Pan across sleeping bodies tangled in sheets. Branches ominously tap against a window. Glass breaks OC. PAUL GIAMATTI sits up in bed. Walks across bedroom and steps in vomit from his DIABETIC CAT.


Paul Giamatti curses and hops into kitchen, trying not to step on his vomit-covered foot. Turns on light. OTS REVEAL obese female INTRUDER dressed all in black except for "I <3 Paul Giamatti" Zazzle t-shirt.

Intruder panics and bolts, tearing open plastic grocery bag packed with looted Giamatti memorabilia - combs, toothbrushes, dirty laundry, etc. Paul Giamatti grabs his cordless phone, still hopping to not step in cat vomit, and tries to pursue the intruder and dial 911. He hops right onto the teeth of a brush and falls over.

Paul!? Are you okay? What's going on?

A dazed Paul Giamatti looks up. PAN to bed-headed and wrapped in a sheet, the RUBENESQUE DENTAL HYGENIST from Episode 104 - Paul's Tartar.