I GOT FIRED FROM MY RADIO SHOW SO HERE ARE MOVIES

This is my first review of movies on the Computer.Howdy folks, it's your good buddy Phinneas J. Tolerance talking to you on the Computer this time, no radio anymore. That den of Satan and his lies - 1480 WRRR "The Whir!" - has decided to stop allowing me to broadcast my soothing messages of Christian values and has instead picked up that liberal harpy Dr. Laura. I heard maybe three minutes of her show this week before my face got so hot I thought it would catch on fire! I could smell the sulfur coming out of my radio. I thought maybe my days of informing the good listeners about the scripture were in my past and I was all set to give the Lord my personal devotion and praise. Then my pal Richard Kanaka sent me a message on the computer at the library and told me he needed someone with honest Christian values to review movies. I am a fan of moving pictures, let me tell you, as long as they make their number one priority spreading the gospel of the Lord Jesus Christ.

I told Richard that I'd be happy to watch a couple of these video movies in my video machine and get back to him with a good Christian perspective. It's important to know that a film has your best interests at heart before you share it with your loved ones. If you are going to see movies with people other than your family then you should probably read the Bible more because you might just be a soddomite. Well, onto the reviewing! 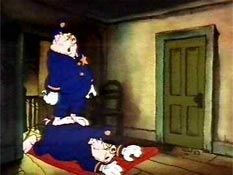 The pirates are up to no good and I mean that in the religious sense. Sodomy alert! NOT FAMILY FRIENDLY.Filmer: Walt Disney

Plot Summary: A fish succubus from the stygian depths of hades wants to haul herself onto shore and know a sailor. She gets some legs through some sort of witchcraft and devil worship and she seduces the pirate from Cuba, but in the end returns to hell with his half-breed devil baby inside her. There are a lot of songs about idolatry and paganism that involve crustaceans and the singing is extremely disconcerting to me. The crab beast is called Sinbad and it is the demon-woman's familiar, she also repeatedly knows Flounder, her fish lover, who may or may not be a communist. I vote that he is, because in America, we have a vote.

He represented Cuba. Look at the facts:

Objectionable Material: This film is so full up with objectionable material I wanted to take my belt off and whip it silly.

Recommendation: I can only suggest this movie to people with the strongest spiritual fiber. I had to reread Leviticus and Corinthians just to fortify myself after watching of it, and that communist sympathizer Walt Disney has supposedly made this movie for CHILDREN. Folks, if you take your kids anywhere near this movie, may the Lord Almighty strike you down with his wrath. 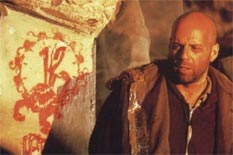 John McClane: Cop for Christ! This is the scene right before the press conference where he thanks Jesus.Filmer: Die Hard

Cast: Bruce Willis, the Negro from Family Matters, the Bad Guy from Robin Hood and a lady who works for a living. Terrorists played by Germany.

Plot Summary: John McClane is a cop with a bone to pick with some terrorists, especially on Christmas when some terrorists from godless Germany try to disrupt his nativity party. The Sheriff of Nottingham is here once again and I don't like this fellow but I read in the newspaper that he is a really nice guy when he isn't being a terrorist drug lord on Christmas. John McClane plays a game of cat and mouse with the Germans while they try to blow up the nativity scene that is inside a bank vault. John McClane is my kind of cop. He is passionate about his love for Christ and he is willing to fight a holy crusade on one of the most important days of the calendar year. In the end he shoots all of the terrorists to death and thanks Jesus at a press conference, which really made the movie for me. The FBI and the police chief are really stupid, obviously because they are Wiccans, and they don't listen to the negro from Family Matters, who is a good Christian and an honest cop.

Objectionable Material: This movie was great. Some people might see some objectionable material but they aren't looking hard enough at how the picture is set up. Only the bad guys do bad stuff!

Recommendation: I would suggest this movie to Christians as a great piece of entertainment that reaffirms their values and to non-Christians as something that might get them out of their rut of blasphemy. I can't recommend this movie to Germans, because boy-o you are going to see some stuff that is going to send you home with a purse full of cry coins.

I guess I enjoyed doing this for you folks, assuming you folks are good Christians, and I can only assume that you will get a lot of mileage out of these reviews. If you aren't a Christian, maybe you should tune in to that foul-mouthed sassy hag Dr. Laura on 1480 WRRR "The Whir!", she caters to your kind. Not me buster!