The more or less Christian holiday of Thanksgiving fast approaches and soon it will be time for us white people to sit around a table and stuff our faces in the name of Jesus Christ our Lord, Amen. I know that I will be pretty thankful indeed when I get to eat turkey because turkey is a pain in the ass to cook and damn, it is mighty tasty. Later that same day, after a long nap, I'll sacrifice a swan to the goat-god in honor of the delicious feast that I have shoveled into my bloated gut and maybe I'll think a bit about the poor and less-fortunate people who live in mud pits in Britain. Maybe I'll reflect a little on how funny it was when we killed all of those Indians and took their land back in the day or whenever. I believe that there was also corn.

As the years go by, each Thanksgiving sees white people pick a new group of non-white people to feel sorry for and say to themselves, "Woah, I'm glad I'm of one of those weird non-white people; boy, I feel sorry... sort of... for those guys." In the days of the Old South it was the brown people that we felt sorry for because they were slaves and stuff like that. Later it was the Jews because they were all getting killed in Europe someplace, and after that it was women because they are obviously inferior to men and should therefore be pitied. Now that the US of A is not quite as open about enslaving anyone, the Jews are killing themselves off, and women have come to terms with their lower ranking, the position of Pity Party lies vacant and there is no end to pathetic groups of poor and diseased folks who might fill the slot.

Here are some new groups that people could keep in mind when they look for someone to feel sorry for and avoid this holiday season. 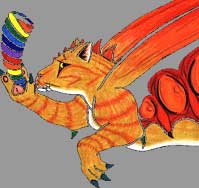 Let's face it, no one worships the Old Norse Gods any more and they haven't for hundreds of years, so Heimdall is not gettin' any play in that respect. Not only that, but he appears to be a big faggy dragon-cat thing whose job it was to guard a rainbow bridge to the Viking afterlife and he has a big phallic rainbow horn that he blows. Talk about gay. Unfortunately for our friend here, the Rainbow Bridge to Valhalla has fallen into complete disrepair, but a new rainbow bridge has been built at the intersection of Haight and Ashbury streets in San Fransisco, California, so perhaps we could persuade him to leave and go there instead. Apparently he has eight brothers and sisters which I assume are as horribly gay as he is, so they will need to find places to go as well.

I believe that if we all join together as white people this Thanksgiving and help Heimdall with our thoughts (but with little else because who really wants to get up to do anything about a big gay dragon-cat thing) that maybe we will be able to help him become less gay and more not gay. Rumor has it that he never sleeps, so he has got to be pretty darn crazy having not slept for hundreds of years at this point. It's probably ruining his fashion sense. Poor gay dragon-cat thing. His bridge is just going to be blown up eventually when Ragrnarok happens, anyway. Let's feel sorry for him and maybe someone somewhere will do something about it. 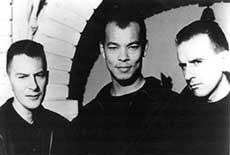 They're unbelievable! Oh wait, that was EMF.

Perhaps you remember the vocal stylings of "Fine Young Cannibals" from their smash hit "She Drives Me Crazy" in the early 1990's. Perhaps not. A lot of people don't, and that, my good white people, is the problem. This group had it all going for them: a hit song, a gig on "Saturday Night Live," a lead singer guy who could share vocal ranges with several species of dolphin, and a prosperous cocaine habit. They won several British music awards which is almost like winning an award for best janitor in the United States, but they refused to take the awards because they thought that the award ceremony was associated with the conservative party. What crazy d00ds!

The good times came crashing to a halt, however, when this band stopped making music altogether in the mid 90's. Since then, they have sunk back into relative obscurity and are now enjoying careers as solo artists, which is to say that they are not at all successful and no one listens to their music. If you're anything like me, you feel deeply moved by this tale of woe and will make "Fine Young Cannibals" your group to pity and somewhat secretly loathe this Thanksgiving. After all, they had success and then lost it just like the Jews had before that big war went on in Europe in the 50's. With the help and Thanksgiving prayers of the white people, this music group might eventually see a return to the soaring success that they once enjoyed with their hit song that they had that one time, and wouldn't that just be something? They were pretty big in the music industry there for awhile, too, so they might have some diseases if that makes it easier for you. 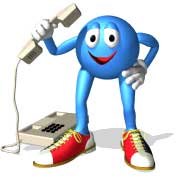 I don't know what this thing is, but it is using the telephone!

No one is more deserving of our white pity than those lovable corporate giants, the telephone companies. Every year they rake in hundreds of millions of dollars by selling over-priced air time to gullible consumers, and for what reward!? They get yelled at and people complain that their rates are too high when all that they are trying to do is earn a living. They merge with each other over and over again in the desperate hopes that if they grow bigger that people will leave them alone and stop picking on them when they decide to make a two-minute call to a town ten miles away cost over five dollars. They even try buying out smaller local telecommunications branches so that they can make sure that their rates are the only rates available to you. They are just concerned about you becoming confused with all of those rates to choose from! But most people don't understand this so they continue to persecute these poor multi-national corporations and the phone companies have no choice but to ignore them. Sometimes people can be so cruel.

I am convinced that if white people around the country join together and think about how the telephone companies are deserving of our pity and prayer that these poor phone folks will eventually be left in peace to rule the world with phone cords wrapped around the throats of the average consumer. This way, they will be free to spend the money that they make from charging outlandish fees in anti-homosexual lobbies and the like in an effort to keep our schools and military homofag-free. Help them help you by thinking about them this Thanksgiving! 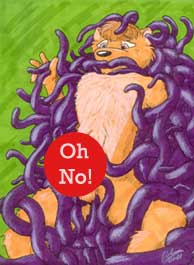 We are destroying the beautiful Mother Earth Nature Spirit!

If we all join forces in our thoughts as white people and think about what we are doing to the Mother Earth Nature Spirit, the energy from our thoughts will cause the layers of filth that cover the works of mankind to be lifted from the world and it will all disappear into a vortex of light in the sky. The Mother Earth Nature Spirit will finally be able to stop raping because human kind will have found a way to live in harmony with nature. All you have to do is think about this as you slaughter and devour a steroid-filled turkey next week.

I hope that these options have presented you with new avenues for your pity this holiday season. It is high time that we move on from the traditional avenues of apathy and stuffing to the broad new horizons of feeling sorry for stuff we haven't already felt sorry for. I invite you to examine your values and come to the conclusion together that there's a brave new world of non-committal pity out there. All you have to do is occasionally, maybe consider that. Or something. Whatever.