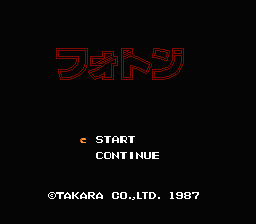 At a glance: I want you ungrateful little freeloaders to know something: We here at SomethingAwful.internet work very hard to bring you the finest in high-quality word comedy. Well okay, I say "we" loosely, as the only communication I do with other current writers consists of my receiving cryptic "comedic" Instant Messages, which I humorously ignore. But I work hard, sometimes spending 10 hours a week on games last played for enjoyment circa 1848. I do this for you, in order to make sure that I carefully examine all the possible layers of shitty in a given piece. This means that, ordinarily, you should be singing my praises as if your empty little lives depended on it.
Platform: Nintendo Entertainment System, 1987
Know a terrible ROM? E-mail me! 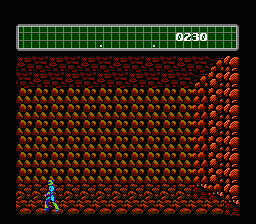 If I stare at this long enough, it looks sort of like the fossilized imprint of an Iguanodon hide. Iguanodon was a little bitch, though.Story: But not this week. Every once in a great while, a game comes along that is so horrible, I need roughly 5 minutes of gameplay to assess the entirety of its failings. Foton: The Ultimate Game on Planet Earth is not only one of these games, but has the most blatantly false name imaginable. In fact, Foton: The Utlimate Game on Planet Earth is not even the Ultimate Game Called Foton that Raptor Red is Playing Right Now, as I've just written the word "FOTON" on a napkin and am now trying to get it to move across my desk with the power of my disgust alone. I swear to God, I think it's wiggling.

In Foton, you are some kind of gun-toting spaceman in a dark maze which is trying to kill you. I don't know why it's trying to kill you, because it gives every appearance of having been built by an extremely dull gopher whose World Domination Plans were restricted to OBTAIN DELICIOUS ROOTS. The objective is apparently to get out of the maze, which is nonsensical on the grounds that A) the maze doesn't fucking end and B) any authentic Spaceperson would have been advanced enough to use that gun and blast his brains out before you could even blow into your NES cartridge.

Gameplay: So you're dicking around in a maze, which consists of long poorly-rendered tunnels that vaguely remind me of the innards of a fetal pig I dissected in my freshman biology lab. Much like in biology lab, stuff often flies out at you from these tunnels, which, as in biology lab, you are supposed to shoot the everliving hell out of. Incidentally, I failed both Biology class and Not Being Convicted of Felonies.

There's radar at the top 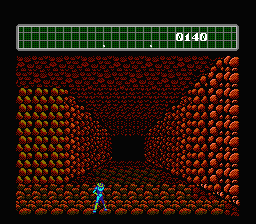 This screen is the entire game.of the screen, but I've got no idea what it's for because the enemies don't show up on it and neither do various "items" you can grab in the maze. Not that you can find anything, because the basic laws of physics are bound up and abused like the worst of Japanese humiliation porn: if you leave the room that looks like charred lamprey flesh and head left to the room that looks like festering hippo crap, go back right and you'll be in a room that looks lik-- Well, it looks almost exactly like all of the other rooms: Brown. But it's a different room. At least, I think it is. Graphics are not this game's strong point..

Graphics: From the way your little spaceman jerks down tunnels just oozing with "depth perception," it's pretty obvious that the makers of this game were jacking off over what they thought was pushing the graphics capabilities of 1987 to the limit. Unfortunately they're premature ejaculators, because sprites routinely fuck up at the strangest moments -such as your character actually moving maybe halfway down the hallway before disappearing and jumping to the next screen. You'd think if you were going to masturbate over graphics, you wouldn't set your game entirely in a series of subterranean tunnels, but then again, you'd think they'd give some of the enemies, you know, bodies.