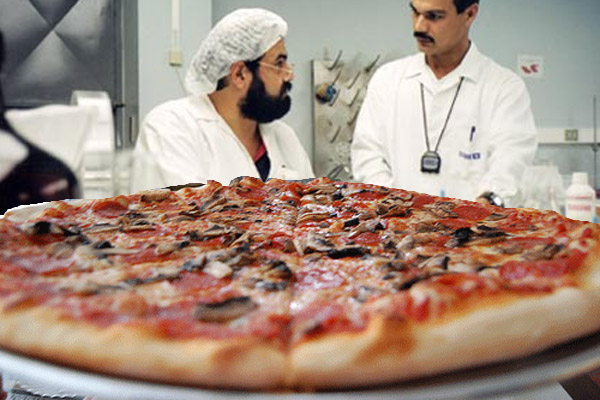 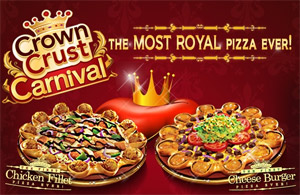 It's time to defund the research guys. Take away their grant money. They can't keep tinkering with the fundamental pizza truths of our universe.

It took the hideous Crown Crust pizza, featuring cheeseburgers baked into the crust, to decide that pizza experimentation wasn't working out. The Crown Crust monster is not unique, it's the latest data point of pizza failure. Need I remind you that the Crown Crust pizza one-ups the recent Hot Dog Stuffed Crust pizza? Or that foreign pizzas, like Japan's cheese-stuffed-hotdog-stuffed-crust pizza, are equally loathsome.

Corporate pizza chains have gone mad with their hubris. Papa John's has a "Tuscan Six Cheese." Do you think people can tell the difference between the Asiago and the Fontina when they bite into it? Tuscany are you going to let them get away with that shit? At some point you might as well call it a "Tuscan Fifty Cheese."

Domino's has a "Chicken & Bacon Carbonara" that looks like a rectangle of boiled leather. You can get it with a side of Mac-n-cheese in a "Breadbowl," a concept so horrible I want to stand outside Domino's and slap pasta breadbowls out of the hands of customers.

And then there's Pizza Hut, which as far as I can discern from their advertising is not even in the pizza business anymore, they just make gross appetizer trays. 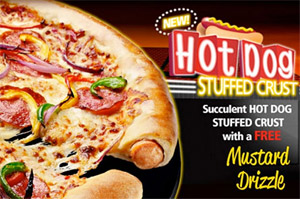 The corporate food scientists determining how to inject meats and cheeses into crusts are certainly part of the problem, but they aren't the whole problem. It's also the indie experimenters. The pizza experts. The goddamn foodies.

These brick oven bozos have spent the past seven or eight years trying to wow us with just the right bubble on a Neapolitan pizza shaped like a deflated football. You know these guys: no ability to make a round pizza, bragging about a burned crust and how they only use four ingredients. You know what else uses four ingredients? A frigging Lunchable.

The artisan pizza era is ending, Basil Leaf. The fad is playing out no matter how many pine nut pestos you shove onto the crust and no matter how many egg yolks you plop into the middle because it makes everything "unctuous." Stop trying to devise new things to put on a pizza. We don't need anymore! Have you seen how fat everybody is? No, they don't want an ambrosia dessert pizza with Nutella sauce and candied apricot pepperoni.

Some of you may consider me a pizza luddite standing in the way of progress. That's fine. I point you in the direction of the humble bucket.

Let's return to our roots. Let's get back to a simple, round pizza with a couple toppings cooked in a gas-fired oven. Don't give me a crust that tears off in cinnamon-dusted strips you can dip in cake icing. Don't put tandoori chicken on a naan crust with chutney sauce. Don't make it a stuffed pizza that looks like a draining cyst when you cut into it. Pan or thin crust. Deep dish if you must. Red sauce and mozzarella and maybe some Romano.

Enjoy it with a salad and a checkered tablecloth and little glass shakers of parmesan and red pepper flakes.

When he's not ranting about pizza, Zack Parsons writes fiction. You can read his new book from Amazon.