Making a movie look good is more complicated than setting up some lighting, pointing a camera in the right direction, and hoping that no ugly people walk into frame. The most common tricks of the trade would seem outlandish to most people outside the industry.

As you might know, some actors are exceptionally short. You might have heard about some of Hollywood's biggest stars standing on crates to appear taller while filming a scene. 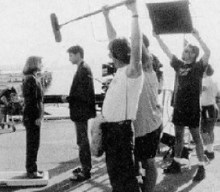 What you probably don't realize is that all actors - no matter their height - appear significantly shorter on camera. In fact, since the 1920s it has become standard practice for everyone to stand on a crate. Even extras. Even animals. Sometimes cars.

The most commonly used crate is a simple apple crate. Since the production and shipping of these crates actually costs more without any apples, most arrive on the set full of produce. Next time you watch a movie, keep an eye out for people eating apples in the background. Once you notice it, you'll never unsee it.

What is it about height that translates so poorly to film? One theory posits that since a frame of film is much smaller than the actual size of the scene it captures, the resulting proportions are shrunk.

This bizarre effect isn't limited to actors, either. Most films that are shot at sea level actually appear to be below the water. This is why production moved into the higher altitude of the Hollywood hills, then to Canada. It is believed that by 2018 most films will be shot in space.

On camera, a bowl of cereal looks exactly like a closeup of pubic lice. A banana looks like a pile of marbles. A glass of milk becomes a swirling kaleidoscope.

A hamburger takes on the appearance of a demonic printing press from the 1800s.

Basically, food doesn't look like food. When a scene calls for one of the characters to eat, the prop department must come up with replacements that - through the magic of cinema - take on the appearance of actual food.

Those rainbow afro wigs that sports fans wear? They look just like lobster thermidor. The only thing that resembles any liquid beverage whatsoever is deadly poison. By default, it looks like orange juice. Dimming the lighting just a touch turns it into water. Of course, actors must be very careful when handling deadly poison. If they drink too much, there won't be any left for later scenes.

One of the most common gripes about making a movie is that shooting on a body of water is a nightmare.

For the longest time, I assumed that this was because water damaged equipment, made camerawork unsteady, and required a lot of logistical planning for the positioning of crew members and actors.

As it turns out, these factors are easily dealt with. The real problem is that sea lions keep hamming it up. 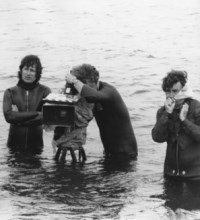 Every time the cameras roll, one of those showy jerks emerges from the water with a beachball on his nose, making that stupid barking noise and clapping his flippers. It never fails. When someone on the set tries to drive a sea lion off, the animal disappears into the water, then comes back up in a different position and splashes the crew member. Occasionally, the stunned man or woman will then have their pants pulled down, revealing heart-patterned boxers. The sea lion usually takes this opportunity to hop on a previously unnoticed pedestal and honk a horn, nodding enthusiastically until someone feeds him a fish.

No matter how good looking and well-groomed an actor may be, their skin turns into a nightmare in front of a camera. Every single pore is visible, and each contains a drooping sac of placenta-like tissue that fills up with diseased air then deflates with splattery shudders.

To alleviate this problem, all actors have their faces completely covered in toilet paper that has been dipped in plaster. This keeps the bubble sacs at bay while presenting a glistening sheen of skin-like material.

There is one word which even the most swear-happy films are reluctant to use, and that is cunt.

Studios are in constant fear that the word will accidentally find its way into the final cut of their films. The most likely scenario for this isn't an actor letting the vulgarity slip, but a random person shouting it within range of the microphones.

To combat this possibility, most films employ someone to continuously shout the word-that-shall-not-be-repeated throughout every single take of every scene. The thinking behind this is that if someone else shouts the obscenity, it will be overshadowed by the professional shouter - whose efforts essentially become white noise.

Surprisingly, the audio of this is never removed or lowered in the editing process. It's always there. We have simply grown used to it over the years.