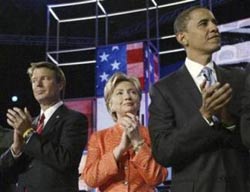 In just three days a tiny percentage of the population of Iowa will be caucusing to determine the possible future of the United States of America. Iowans have been hearing the pitches of various candidates and weighing their options for months, but one crucial duty of the president has gone largely ignored in these calculations: the press conference.

We've seen how the various candidates have acted and reacted in the bright lights of the media frenzy surrounding the presidential primaries, but we have not stopped to contemplate just how each candidate might approach this key component of the presidency. How will they handle their administration's press conferences? How will they respond to questioning? Will the sound of their voice melt teeth or will they be the soft whisper of America's greatest lover? Can we really stand at least four years of their ugly face?

Today we consider the Democratic candidates, but we need to begin by taking a look at the man one of them may be replacing: 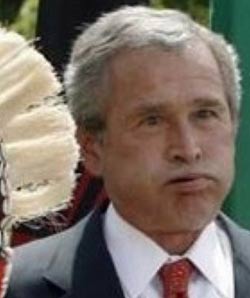 Bush approaches the podium like he's the keynote speaker at whatever unhallowed Kiwanis branch harbors local businessmen the likes of Dick Cheney and Paul Wolfowitz. He usually opens by reading a few jokes that wouldn't make the cut of a motivational speech at a school for the catatonic. Once everyone has stopped gasping with laughter, he starts calling on reporters by the dopey nicknames written on index cards for him by whoever operates the shock collar that trained him not to bark at squirrels.

Bush responds to a difficult question by acting as if the question is impossibly silly. He then lectures the press in a smirking tone usually reserved for scolding babies. This works extremely well, because the majority of the White House press pool members are giant babies dressed as adults. His answers rarely make sense within the context of a rational world, but the cooing and jangling of keys is usually sufficient to enthrall David Gregory.

Despite his ability at deflecting them, Bush rarely takes questions at his press conferences. He seems to derive great pleasure from the open contempt with which he regards reporters, forcing me to surmise someone does not want Bush to speak freely.

Greatest Fault: Though he is scoffed at for baffling quotes like, "I know the human being and the fish can coexist peacefully," Bush's true failing is brutal and completely unintentional honesty. The truth sometimes erupts geyser-like from his face, frothing out unbidden in the midst of an otherwise routine onslaught of bullshit. This reflex causes him to say things that are so astonishingly honest the whole world just pretends he never said them.

See if you can spot the "truth geyser" in this sample clip:

That might have been considered a gaffe for a normal politician. George W. Bush is a turbo politician. Deal with it. 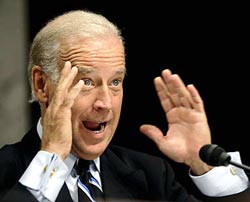 Three Democrats lead the charge to the White House podium. Hillary Clinton is in front by most metrics, relying on her husband's popularity within the Democratic Party and an immense campaign apparatus to safeguard her planned ascendency to the American throne. John Edwards and Barack Obama, a failed country-fried senator and Denzel Washington, D.C., are the long shots for the Oval Office.

Elder statesmen like Joe Biden and Chris Dodd are receding into bitter irrelevance. Bill Richardson, a self-aggrandizing bore without compare, has been feigning significance while angling for a paycheck from the Clinton White House. Kucinich and Gravel will soon be abandoning their campaigns and returning home to their gorgeous wife and sock with buttons sewn on for eyes respectively. He used nine buttons. We'll be omitting these lesser contenders. 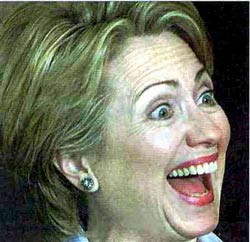 Clinton's presidential husband spent years using a casual demeanor and a chuckle as a front for endless dissembling. Bill was so good at it that when the Republican congress forced him to publically apologize for shoving a Cohiba into a fat intern America actually got mad at the Republicans. When all else failed, Bill used the accusation of a conspiracy coming from the rightwing media to cover up for his latest lapse in self control.

Hillary's press conference methodology, as demonstrated in a handful of hostile interviews, functions as a terrifying funhouse caricature of her husband's technique. Bill's casual demeanor is replaced with an iron adhesion to prepared points and the good-natured chuckle has been upgraded to a caterwauling reminiscent of the sound a dolphin might make during a rape. Bill could become strident in the face of persistent questions, but Hillary snaps like a bug-eyed turtle at the sight of a mealworm. She boils with barely repressed rage at the way the press wrote articles about her dumb hair in the 1990s.

What the future holds: Expect the next Clinton administration to be about as open and transparent as the front door of a strip club on Sunday morning. Before the end of the first year every tough question will be rebuffed with a cackle and a surly reference to "the rightwing blogosphere."