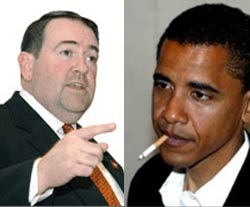 Congratulations, America!In a process as arcane and creepy as Shirley Jackson's Lottery, Iowans have selected the two people they believe are best-equipped to be the next President of the United States of America. This time it's a lazy-eyed hyper-Christian goober that resembles a deflated Kevin Spacey parade balloon and a grinning black mantis with a name straight out of 1001 Arabian Nightmares. Balack Hussein Al-Jihadi received my attention on Monday, when I covered the Democratic frontrunners.

Today it's all about the Republicans and what their press conferences might resemble if they manage to fail upwards into the most powerful job in the world.

The field of Republican candidates for president has been justifiably perplexing to Republican voters. It is the most reprehensible menagerie of rubes, ghouls, and incompetent layabouts that has ever been assembled by a major party. I include the word "major" because knowing the Internet there is probably some obscure political party associated with atomizing Mexicans that includes a child rapist, a former concentration camp guard, and the sort of person that flunks out of a clown college. Until I find that party's website we will have to make do with the Republicans.

The new guy to beat, by virtue of his win in Iowa, is former Arkansas Governor Mike Huckabee, an affable regular guy who was such a shitty governor he released a convicted rapist at the behest of the website Free Republic. The rapist went on to murder two women and Huckabee has gone on to become the Republican front runner, much to the chagrin of Mitt Romney. 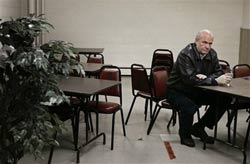 The only other Republican who actually has a chance of winning the nomination is John McCain, a Vietnam veteran made out of rickety bones, dust, and a perpetual scowl. His constant gaffes early in the campaign wrapped his "Straight Talk Express" around a metaphorical telephone pole, but the disturbing field of Republican candidates has left him poised to win in the upcoming New Hampshire primary.

Among the second-tier detritus of the Republicans is uninspiring doofus Fred Thompson, who was hailed as the next Reagan. A third place tie in Iowa for Thompson has turned him into the dead sailor aboard the submarine of the Republican Party: none of the Republicans want to go near him, but they're stuck with his rotting corpse. Rudolph Giuliani is still slinking around in the shadows, occasionally whispering about 9/11 or bugging his eyes out erratically, but his unusual strategy of "never try to win a primary victory" has preemptively condemned him to the scrapheap.

Finally, there are the crazies. Duncan Hunter is a xenophobic ultra conservative who regularly loses in polls to "don't know/don't care" by double digits. Alan Keyes is a Kermit-voiced firebrand with the mannerism of a Baptist preacher and the rhetoric of an inquisitor. Then there is Internet darling and proud blimp-renter Ron Paul. He derives a slice of his support from the neo-Nazi group Stormfront and once declared in his Freedom Watch newsletter, "I think we can safely assume that 95 percent of the black males in that city [Washington] are semi-criminal or entirely criminal." Did I mention that he has managed to raise more money than any other Republican candidate? I guess all that gold Goering sunk into a lake is finally paying off.

Yikes, that's a lot of candidates! For the purposes of our press conference predictions we'll be taking a look at the three frontrunners and the most viable of the crazies. 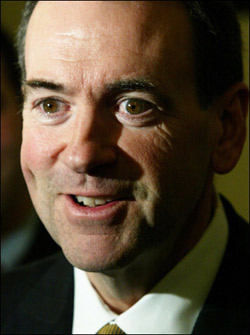 "Aw, shucks! Willickers! Golly, you'd vote...for me?"Huckabee is your best friend that told you a few weeks ago, in strictest confidence, that he accidentally killed his girlfriend in the middle of an argument. You'll hang around him and you'll gradually forget about how he smashed in her face with a telephone. He's a fun guy, he likes to tell jokes, so you'll start laughing. Then, just as you start to come down from your laugh, you make eye contact. Then one of his crazy eyes rotates sideways like a chameleon and you have that sinking recollection that Mike Huckabee buried his girlfriend in his cellar.

Mike Huckabee has a cellar overflowing with rotting girlfriends, not even including the aforementioned rapist release. There is the time his hateful Stay Puft son killed and mutilated a dog and then Huckabee fired the cop that tried to investigate the incident. There is the time he suggested rounding up everybody with AIDS and shipping them off to some AIDS colony. Oh, yeah, and then there's the time when he admitted that the world might have been created in six days, 6,000 years ago, but he doesn't know for sure because he wasn't there.

I don't know for sure that Hirsohima wasn't wiped out by a dragon, I wasn't there. Better slide that one into the textbook too!

Knowing all that, knowing his cartoonishly backwards views and his catalog of misdeeds, it is still almost impossible not to be seduced into liking Mike Huckabee when he starts talking.

What the Future Holds: His melting Jim Nabors look and his regular guy routine are straight out of the 1950s, but it's an affectation. Huckabee is a shark ready to gulp down the press pool in one mighty swallow and slowly digest them in his wee little gastric bypass stomach. No matter what they ask him he'll just smile, spin a yarn about corncobs or Jesus, and then say something humble like, "Shucks, I could be wrong. I guess we'll just have to wait and see."