The velvet bag for the potion inscribed with the DICK method logo as well as the peacock bracelets and heart amulet will all be available for funders. The potion container is now the bullet as promised. THANK YOU! This is the realization of a dream and unlocking the sexual/sensual potential of all women everywhere for the betterment of society.

About Myself & This Project...

I have been a key player in the PUA scene on megaforum.biz and playersclubxxx.ky for almost half of a half-decade. I was sick of always being the friend for girls to tell all their probelms to. I was safe and "like a brother" and I knew I had to do something radical.

I first joined the game in 2009 as "Goggles" and my persona was to wear swimming goggles but I had to abandon this because they fogged up. So I did some meditation and I came back to it and decided to become "Guru." That was when I wrote my first advice ebook Outside the Box: The HARPOON Method Revealed which was the HARPOON method based around "Spot -> Spear -> Reel -> Exhaust" which sold almost 60 copies.

I followed that up with Outside the Box II: Sparrowing Revealed. That one was much easier. Basically, you dress like Jack Sparrow from Pirates of the Caribbean and you stare intensely at sexy women. Come to think of it, that's not basically what you do, that's exactly what you do. Just put on your best Sparrow look and hang out where you know hot bodies congregate. 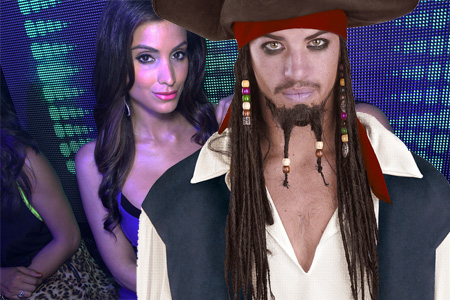 But I dropped out of the PUA scene in 2012 following an incident with a Tilted Kilt waitress laughing at me and a brief romance affair with a stripper (bad news) which occurred because I lost my focus when she looked right at me while she was dancing. I'm back, I'm charging out of the friend zone like a bull, and I have a new method that doesn't require any fancy book or special peacocking.