From: S.C. Short
Subject: Is there someone else writing the site?

Hi Lowtax (if that's who this is),

I normally wouldn't bug you, I know you get a ton of email and until now I've had nothing interesting to say. I have been enjoying your site (and of course all the hosted sites) for months, recommending it to all my friends. Your site is my homepage.

The last few updates, though, have been puzzling me. While they've been moderately funny, they seem to lack the special spice that has been the Something Awful trademark. The jokes and sarcasm seem to forced and non-spontaneous. In fact, it feels like someone else is writing some of your content. This concerns me, as there's no indication that anyone else is contributing to things like the main page, and this last Cliff Yablonski for example. If the site has changed hands, I think your readers have a right to know.

Okay, let me explain to everybody thinking of sending me these types of messages why my latest updates have been "lacking":

I'm trying to redesign and recode two entire websites, this one and Real Awful News.

I'm converting (by hand, since it's impossible to copy / paste it) over 1500 documents to the new design, and trying to get this done by the end of this week.

I'm in the process of moving the entire site over to a new network and server.

I'm trying to help get the news backend and scripting done (special thanks to radium who's coding it).

I'm trying to get new forums installed and configured (since I basically found out that the $200 I spent on UBB has been wasted because UBB is a horrible piece of crap).

I'm literally in front of a computer, working on this site over 16 hours a day. If my updates are "lacking" lately, as they will undoubtedly be for the next week or so, it's because I've spent all day working on this site's future, and I don't have the time to dedicate an additional four hours to writing content. There just aren't enough hours in the day. I really apologize if it doesn't meet everybody's standards, but there's only so much one person can do daily... and since I'm currently having dreams about SA's server and HTML (I'm not exaggerating), I think I've pretty much hit that limit. Until this site has moved to eFront and is under the new design, I'm going to spend over 16 hours a day, every day, dedicated to working on it and converting documents over. For all of you concerned about the "quality" of the site during this period, cut me a little slack. I'm only one person, and this is all I can do.

A hilarious user-submitted ICQ prank? You'd better believe it! After the onslaught of user-submitted pranks that consist of cutting barbs and unbridled hilarity limited to calling the other person a "STUPED IDIOT" repeatedly, somebody's finally hit paydirt and sent in one that genuinely made me laugh... a lot. Take some time to read Artfag's "Read The Menu!" prank, where a vile spammer has precious moments of their day wasted by an insane chef.

Now I don't want everybody out there to get terribly excited and fall over in pain, but... well, scratch that. Seeing somebody fall over in pain is one of life's more treasured moments, second only to watching tires inflate at the Goodyear service station. Anyway, what I'm trying to say is that Something Awful has scored a gigantic win by nabbing one of the art community's most famous and talented artists. Yes, I was able to bring over a man with so much promise, so much skill, and so much potential that museums are literally lining up to bid on his masterpieces as I write this. Who else could I be talking about but... yes... Bjørnar B.? 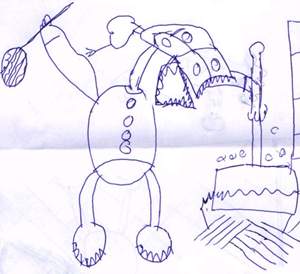 My name is Bjørnar B. I love to draw and my biggest dream is to draw for Disney. (specially Donald Duck). My interest for drawing started in the late 90's I'm now going in drawing scool and my Teacher gives me exellent grades! I was once in america I saw a lot of big mamas and a few big papas. I low to run and draw. Early this year I went on a good 36 place in a drawing competion for swedish aged 12-17 my mum was real proud.

Bjørnar B. is ready and willing to draw whatever you, the readers, would like to see him draw (as long as it pertains to Donald Duck). As you can tell by the masterpiece above, Bjørnar B. has completely mastered the style and artwork that truly defines the essence of Donald Duck. Do yourself a favor and head over to Bjørnar B.'s site to gaze in awe at his artwork. Then, after you've wiped the drool from your chin, send him an email and give him some of your ideas for new Donald Duck scenarios. You owe it to the children, oh, the precious children.

The air is filled with excitement, creative minds, and wet paint fumes. There are so many familiar faces here I can hardly even get them all down. I just talked to an excited and somewhat light headed Patrick Stewart who told me he was happy to be here, just sad they weren't serving martinis and expensive hookers. “FUCKING LYING BASTARDS!” he complained while kicking a trash can. Other stars include Steven Spielberg, Nicole Kidman. Bill Clinton, Abraham Lincoln, and Big Bird. But the ones getting the most attention are the Goach cast members and flaming kamikaze Smurfs, sacrificing their lives in the name of Papa Smurf, may their great utopia of little blue things live on forever. But nothing says "kick ass premier" quite like a random passerby put it, “OH GOD! JUST LET ME GO! PLEASE!” My, what a funny practical joke that was, he was so relieved when we finally let him go… into the Manhattan river inside a nice leather bag.

The original Goach was actually used for this movie, proudly shouting at our reporters, “FUCK OFF!” when he sensed us approaching him. I suppose Goach just got a little hostile because of the earlier occurrences when he was in his pen. Our Camera Operator, Cameron Operate, began throwing M&Ms at him while repeatedly saying, “Heyyyy there goaty-goat, bet you want some of this,” and then grabbing his crotch through his tight jeans. Now all poor Cameron can eat is melted fruit roll ups, but I wouldn't recommend feeding a corpse.