Master Of The Recorder, God Among Men

I didn't always want to play the recorder. In fact, it was the last instrument I wanted any part of, as it carried a certain reputation that I was eager to avoid. My studies were very important to me, and I couldn't afford to get distracted by all the romantic attention that the recorder would attract. 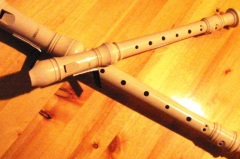 That changed in a single night. My whole world shattered into a trillion pieces and reassembled itself in startling clarity when I saw Kurt Cobain play an entire set with a recorder at the Super Bowl half-time show. His heartbreaking rendition of Three Blind Mice in particular spoke to a part of me that I didn't know existed. My soul had awakened. I had found my calling.

The very next morning I walked down to the local music store, fighting an urge to duck into the comic shop along the way. There was a new issue of Rob Liefeld's Brigade on display. Its cover featured even more pouches, padded heads, Wolverine clones, and scowls than the previous issue. But I persevered. My will had been reforged.

The air in the music store crackled with potential. My arm hairs stood on end as I slowly turned in place, gawking at the mind-boggling assortment of instruments. There were three entire aisles of triangles. They had everything from beginner models to the high-end professional kits with 20 triangles of varying sizes. There was even a section with experimental four-sided triangles. I saw a kid in a Ramones jacket nervously test one of them and vanish into a hell dimension before the eerie noise subsided. 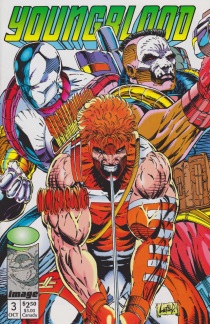 Soon I found myself puzzling over a selection of recorders that fit within my meager budget. A sales associate tried to upsell me on a Monster Cable gold-plated kazoo, but I had found exactly what I wanted. It was beige and plastic, its nondescript surface covered in gloss. It was the sexiest instrument I had ever seen.

Trembling, I picked up the recorder and blew one long note without holding down any of the holes. Everyone in the store turned around and stared in awe. After two minutes or so I stopped to inhale sharply, slobber dribbling down the inside of the instrument. The clerk asked me to keep the instrument without charge, a solitary tear running down her cheek.

After that moment, my rise to fame was a blur. One day I was practicing at home, then I was winning a local battle of the bands competition, making national headlines for soothing a bear that came within inches of mauling the president, and releasing the #1 album in the world.

Remarkably, I never learned how to play. I continued to blow into the recorder without holding a finger over any of the holes to form proper notes. Something about my style resonated, though. People treated me like a god, and soon I began to believe that I had earned it. My life spiraled out of control.

The wild backstage parties were legendary. We had wine coolers with straws in the shape of recorders. People undid the top buttons on their button-up shirts and spoke relatively loudly, not even addressing one another properly as sir or madam. There were brutal pit fights to the death.

Drugs consumed my life. At the height of my addiction I was spending all of my money on burlap sacks with the word "DRUGS" printed on their sides. I never actually took anything. It was all about collecting, riding the thrill of buying as much as I could get my hands on.

I thought that I was invincible, that I didn't need anyone or anything. Not even the recorder. My next album was horrible. Fifty five minutes of me blowing air tunelessly without any instruments. As the scathing reviews rolled in, I sat alone in my mansion and watched my empire crumble before me.

My salvation came in the last place I expected. My agent promoted #Recorder on Twitter. My loyal fans came to my defense even though I had nothing but contempt for them. The album sold just fine, and I was even able to act like a complete asshole without suffering any consequences.