What America Means to Me 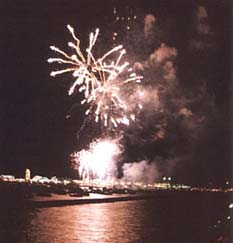 Simulating a warzone in our urban centers is what makes this country great!Apparently to compensate for buildings exploding in America last year, people across the city of Chicago have been celebrating our nation by blowing things up since the third of July. It culminated in last night's orgy of explosions, a fireworks display that was literally city wide and stunning in a "how much money did these people just throw into the sky" sort of way. In all honesty it really did make me feel a little patriotic, standing on balcony drinking an American beer, watching dozens of Puerto Ricans in my neighborhood shoot ridiculously expensive mortar fireworks into the sky to celebrate America's Independence. That is what America is about, not American flag refrigerator magnets, not bobble heads for your car of President Bush. It's about a shitload of foreign immigrants willingly shelling out their hard earned money to celebrate our nation's independence.

Don't mistake my sentiments for chest-pounding jingoism, I am probably as cynical about the United States as a crazy militiaman in Wisconsin who has a self-embalmed deer head sitting over his television set. I'm just not crazy enough to kill and preserve a deer head and the wall space above my TV is reserved for my DVD racks.

This year the fourth of July also just happened to coincide with my annual cleaning of a musty steamer trunk containing a variety of worthless papers I have collected over the years. Near the bottom of the trunk I found a 7th grade paper I had written about what America means to me. I wrote it while I was on a class trip to Washington D.C. and my paper so impressed the teacher that I won some little contest and got to keep a flag that flew over the Nation's capitol along with a sheet of paper autographed by all of Ohio's senators and representatives. The flag was far too huge to actually fly anywhere other than a Perkins or Bob Evans restaurant flagpole. You might not know this but Perkins and Bob Evans constantly compete to see which restaurant chain is more American by having their franchises fly increasingly larger flags every year. By 2025 the flags will be roughly the size of a river barge. By 2090 the flags flown by Perkins and Bob Evans will eclipse the sun over the continental United States.

The flag disappeared into my closet and is probably still there at my parent's house since hauling around a giant symbol of America was never at the top of my moving priority list. The paper I wrote to get the flag has followed me around for no reason other than it isn't twenty pounds and a hundred square feet of fabric.

Within this 7th grade paper I stated that, "America is a nation of freedom built on the blood and tears of generations of those who would seek to be free."

Wow, I am deeply moved. Also when I was in the seventh grade I was apparently a scriptwriter for Jerry Bruckheimer movies. Obviously there is some truth to that statement, just like there is some truth to the statement that there is a centipede in my apartment right now; I don't know where it is, but it absolutely has to be there. On the plus side, this paper and all the hubbub transpiring outside in the sky above Chicago last night did get me to thinking about what America does mean to me these days. Upon revisiting these feelings about the United States I discovered, not really surprisingly, that my concept of what America means had changed a lot since the 7th grade.

My theory about what America is these days is both much less patriotic and much less coherent. To me America is best summed up as the giant robotic head of Abraham Lincoln with peace-symbols for eyes. The head rotates 360 degrees constantly and the mechanical mouth flaps up and down spitting out partially chewed P'zone from Pizza Hut and small gold coins. Children laugh and play at the base of the giant robotic head even though the pieces of that horrible pizza pocket crap is hitting them in the face and scalding them brutally.

Essentially I think this is how the crazy terrorists view America too, and while I see a giant rotating Abe Lincoln head that scalds kids with P'zones as a positive image, they view it as the Great Satan. What exactly "The Great Satan" is remains another mystery. While I think he is some sort of magician or failed pro wrestler, I never wrote an essay about him in the seventh grade so I have no reason to really explore my theories about him.

So I've got a complex metaphor for what America means to me in the form of the "All-consuming Abe Lincoln P'zone Bot", but that doesn't really help anyone who isn't either me or an evil terrorist. To clarify things for non-me non-terrorists let's break this incredible symbolic representation of America down and analyze the pieces.

Abe Lincoln's Head - Abe Lincoln was like the third or fourth American president and he put a stop to the Confederacy. Obviously, my vision of his head represents the good and pure early intentions of America. He is a firm foundation on which the dreams and aspirations of most freedom loving people are built. The head is mechanical because the good intentions of America's early years have been stripped of their soul and turned into a cold manifesto. His head rotates 360 degrees as a symbol of our nation's overwhelming urge to monitor and police all directions at once, to be omniscient. The peace signs represent that despite some mistakes, we ultimately do want peace.

P'zone - Other than my hatred of that guy from "In Living Color" who does the commercials for this fucking awful crap, the P'zone also represents American consumerism gone astray. In our haste to commercialize every possible avenue and churn the topsoil over and over again until another crop grows, we have begun to do nothing but recycle already bad products and remarket them again even though they failed once or more. P'zone is the evil aspect of capitalism, many would say the evilest.

Children Playing - Children enjoy playing, much like the French, and that is what the children represent. They are the French dancing for the end of empire, the collapse of the American hegemony, even as they frolic in the P'zone and suffer under our far-reaching cultural imperialism.

Despite the anti-American sentiment my vision seems to harbor, I love this country. It has the lightest jail sentence among first world countries for violently attacking P'zone commercial spokesmen. Where else in the world can you beat the ever-living fuck out of that guy from "In Living Color" with a hose full of cement and only get a five-year suspended sentence? Not France, I can tell you that.

Phriday of Photoshop, The

Hey folks, it's your arch-nemesis Livestock here to remind you that today is probably Friday. As you might have bet a lot of money on, I have prepared a new Photoshop Phriday featured jam packed with funny images created by our beloved Forum Goons. This week the goons raided the Library of Congress and managed to soil a good chunk of American history. 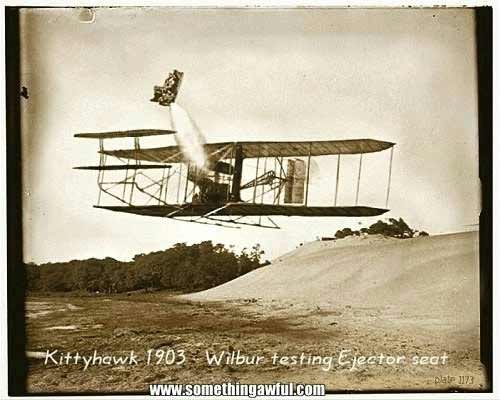 Celebrate the 5th of July in Photoshop Phriday style!