Batman:Commissioner Gordon? I'm surprised to hear from you after our last conversation.

Gordon:Yes, fortunately for you I don't hold grudges. I've forgiven your unruly behavior. 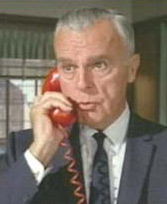 Gordon:Crime never sleeps, Batman. You of all people should know that.

Batman:There's been a crime? You actually used this line for its intended purpose?

Gordon:No, that was just an expression. My reason for calling is more philosophical in nature. Something occurred to me as I was staring directly into my desk lamp's fiercely burning light bulb for an extended period of time.

Batman:I believe your doctor has warned you about that.

Gordon:Repeatedly. What occurred to me was how difficult life must have been for people before electricity came along. How did their tvs work? Who sent them their electric bills every month? I don't understand why someone didn't just invent a time machine to go to an era when electricity had been invented, then steal that electricity and bring it back.

Gordon:Yes. Not a lot, mind you. Just enough to show everyone back in their own time what it looked like so they'd know what to dig for.

Batman:How long have you been thinking about all this?

Gordon:I believe you said it's four in the morning, which would make it about nineteen hours.

Batman:And you had nothing else to do today? No police business at all?

Gordon:Nope. With you and the other superheroes around, we've been able to reduce our police force considerably. It's gotten to the point that I have practically no one to oversee, which leaves me with more time to focus on the big picture.

Gordon:Have you ever seen Highlander? It's JUST like that. Every time we get rid of an officer, I absorb his salary and the time I would have spent commanding him. The analogy really works when you realize that one of the bad guys in the Highlander television series was Richard Moll, who was the bald bailiff in Night Court. He was practically a cop, like me. Batman?

Gordon:Batman, in the end there can be only one.

Gordon:I'm more frightened than I've ever been in my life.

(strange man's voice): Yes, this is the president of the United States. How may I help you today?

Gordon:I'm sorry Mr. President! I thought this was Batman's hotline.

(strange man's voice): I see. The phone you're using, what color was it when it was first installed?

(strange man's voice): Well there's your problem. My phone is more of a cardinal red, so I'm thinking the paint on yours must have faded over time to match it. Try slapping a fresh coat of paint on your phone and I'm sure you'll be able to connect to Batman with no problems.

Gordon:Thank you Mr. President, I'll do that right away. You've been very helpful and I apologize for the interruption.

(strange man's voice): Not a problem.

The Joker: I imagine your face is quite red now commissioner, especially since that paint is undoubtedly still wet!

Gordon:No, it's just on my ear and the palm of my hand. What have you done with Batman?

The Joker: Nothing, not yet at least. You've actually reached me on my personal hotline once again because you didn't let the paint dry.

The Joker: Oh yes, several. They save me the hassle of having to memorize phone numbers.

Gordon:That's what I was just telling Batman the other day! I've just the one so far, but I want to-

The Joker: Look, commissioner, don't take this the wrong way but it wouldn't be wise to continue this conversation any further. Our professional relationship could become awkward if we get chummy.

Gordon:I understand. So I should just let this paint dry and then I'll be able to call Batman?

Gordon:You aren't playing a joke on me, are you?

The Joker: Am I the type of person who would do such a thing?

The Joker: I did a knowing wink when I asked that. You couldn't see it, but I did it.

Batman:Please make this quick, Gordon. The Nick Kids' Choice Awards are coming on any minute.

Gordon:Batman! Thank goodness it's you. Has the Joker been anywhere near your phone within the past few hours?

Batman:No, of course not. I've been right in this chair watching the preshow. You wouldn't believe the outfit that Ron Jeremy is wearing.

Gordon:I've been trying to call you all day, but I kept getting the Joker.

Batman:Ah, the paint on your phone faded didn't it?

Gordon:Yes, at first I thought the Joker had tricked me but I suppose that was really the problem. How did you know? Did the same thing happened to you as well?

Batman:Nope, but one time I was spray painting my emergency backup capes and I accidentally coated my eyes with three layers of black paint. As a result I couldn't see for days. It's basically the same thing.

Gordon:Yeah, pretty much. It's funny how you and I do a lot of the same things. It's like we were destined to be best friends.

Gordon:Batman, I need some help. I'm going to write an inspirational book entitled "Where Gordons Dare" that chronicles my illustrious career up to this point. 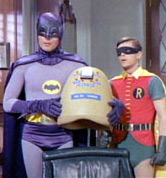 Batman:No. Believe it or not I'm very busy.

Gordon:Come on, Batman. 100% of the profits will go toward the Missing Children's Fund. Once we raise enough money to afford enough manpower to locate that fund, it'll do a lot of good for those kids once we find them.

Batman:Fine. I suppose I could provide my account of the last few years we've worked together.

Batman:Oh. I'd be happy to write a foreword then. Those are only like a page and a half, if that.

Batman:Well then what do you need help with?

Gordon:Do you have a pencil and some paper I could borrow?