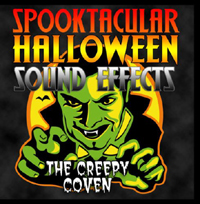 Full disclosure from Spooky Steve: the Halloween sound effects album review community can be very insular. Ever since the tragic incident involving Disgsuting Dave, a malfunctioning Rascal, and that busy Outback Steakhouse parking lot, Spooky Steve hasn't had anyone to bounce ideas off of. So when that second census taker wandered onto The Compund, I asked Pastor Billy for the chance to test out The Creepy Coven on an Outsider. Spooky Steve played this album outside of the census taker's holding cell for nearly four hours, and the effects were more debilitating than when Spooky Steve listened to 17 Ghoulish Monster Sounds while violently ill with the stomach flu! Spooky Steve's subject must have thought the vampires on The Creepy Coven were real, because he kept weeping and saying "Please don't kill me," and even offered to give Spooky Steve money. Congratulations, The Creepy Coven! It looks like terror has a new address!

Spooky Farts for Halloween: The Wet Ones 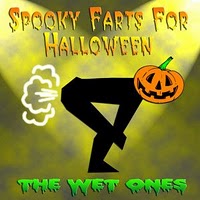 Pastor Billy doesn't typically permit contact with the outside world, but sometimes he allows exceptions if they don't conflict with his teachings. This album was sent to Spooky Steve with a special note attached, and right now Spooky Steve can't decide what makes him want to vomit more. Overcoming the unfortunate ways of people takes time and self-reflection, and as Spooky Steve's late best friend Disgusting Dave once said, "The best revenge is living hell!" So in the interests of being the better person, Steve will transcribe the contents of the note while refusing to comment. Thank you for respecting Spooky Steve's moral superiority.

Looks like the fart compilation industry is stealing from your gay little hobby. I bought this for a penny at the 99 cent store and figured it would send you into one of your stupid little panic attacks. You know, in retrospect I am so glad that you never tried to fuck me.

After the final stages of The Uprising, Spooky Steve will be laughing as you roast in Hell, Carol. Let Spooky Steve show you how entertaining that will be: 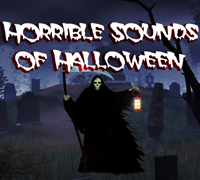 In the interests of staying relevant and topical, Spooky Steve is going to try and "liveblog" this album.

11:44:22 PM: Typical graveyard fluff. Sound of zombies breaking through the ground is clearly the work of amateur foley artists. Is that aquarium gravel? Spooky Steve is rolling his eyes.

11:47:19 PM: Spooky Steve is annoyed when his vampires have Romanian accent, and even more annoyed when "actors" can't get these accents straight. Come on, people!

11:55:33 PM: Horrible Sounds of Halloween has taken an interesting turn! Spooky Steve's eardrums are currently being rocked by the sounds of whooshing helicopter blades and explosive gunfire! Not sure what they're doing on a Halloween album, but Spooky Steve likes it when people think outside the box!

12:03:27 PM: Horrible Sounds of Halloween has Spooky Steve on the edge of his seat! Clearly, this is being recorded from the monsters' perspective -- Spooky Steve can barely make out a man on a bullhorn telling the monsters to "release the hostages." Monsters with hostages? Horrible Sounds of Halloween may very well be the best album of this decade!