The Kingdom of Zarahemla!

Monday, Feb 18, 2002 by Rich "Lowtax" Kyanka (@TwitterHasBannedAllMyAccountsEver)
Know of an awful site? Send it to us and become a hero!

The Kingdom of Zarahemla!, submitted by scromp. Now don't get me wrong here folks - I'm all for the idea of launching dorky retarded families out into space so they don't have to get in front of me at the grocery store and bring roughly 68 items to the "10 items or less" lane. However, I think a critical part of this plan lies in disabling all forms of communication these people could possibly have with the rest of us, including their horribly embarrassing webpages. The illustrious "Kingdom of Zarahemla" is some incredible place on Mars where a family of genetically-deprived half-wits reign supreme and spend all their time making new flags and drawings and rules for their land of nerdocity. 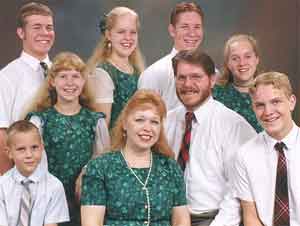 February, 2000 By Royal Decree: Be it known that the Royal Flag of the Realm shall have a length three times its height and shall be a double tailed pennant. The Ducal flags shall have a length twice their height and shall also be double tailed pennants. The County flags shall have a length twice their heights and shall be single tailed pennants. The web site is changed. The names of the counties of Vulcan and Romulus are changed to T'Khasi and Ch'Rihan, respectively. Lord Lyle of Ergoth, Lord Randall of Caspian and Lord Justin of T'Khasi are given the Order of the Gryphon, and the title of Sir is added to their names in recognition of their assistance to the Crown. The Sedition Act is passed whereby Parliament is empowered to protect the Realm from Revolution and Sedition. The members of the Chobah Revolution are exiled from the Kingdom. The Monarch reclaims the title of Count of Rasilon, which is proclaimed a Royal Holding. Treaties with Homeland and the PBF are passed.

November, 2000 The Right Honorable Lady, Dame Charlene, Countess of Castrovalva, Weilder of the Dragonhorn Crossbow shall henceforth be proclaimed Minister of Education and Keeper of the Royal Library at Castrovalva. Princess Brittanie, Duchess of Tarabythia is appointed the Minister of Arts. Lord Sir Justin, Count T'Khasi is appointed Royal Supplier of Vacuum Cleaners and Shampooers and Lord Chamberlain of Domestic Services. By Royal Decree, The Right Honorable Lord, Sir Richard, Heir to Caspian is hereby awarded the position of Post Master General of Zarahemla which also includes the web and email, etc. Also, by Royal Decree, The Right Honorable Lord, Sir Dwayne, Count of Dyanodu shall be awarded the title of Chancellor of The Royal Zarahemlan University (RZU) to be built in Dyanodu. By Royal Decree, The Right Honorable Lord, Sir Stephen, Count of Qualenesti shall be empowered and invested with the titles of Minister of Technology & Royal Nerd. Tyler Smith is granted Zarahemlan Citizenship and, admitted to the House of Lords as Count of Frodwaith.

Okay, whatever you say Intergalactic Nerd Colony! Maybe you bozos can hook up with space nerd Wil Wheaton and you can trade tales of times you hit on and were rejected by Wookies. I think I speak for the collective audience of the entire Internet when I ask "WHAT IN GOD'S NAME IS WRONG WITH YOU SCREWED UP SACKS OF BRAIN DAMAGE?!?" There's like pages and pages and pages of this weird bullshit that they spent all their free time writing (which I imagine is plentiful since there's nothing else to do when your professional occupation consists of watching "Ricki Lake" and reading tabloids all day). I can't stress how utterly fucked up this website is and it simply boggles my mind why this family of rejected human beings decided to write so much of this crap and then rape the Internet with it. If you're still not convinced, I'd like to offer up the following links:

Royal Decrees and Acts of the House of Lords - Monthly updates detailing the wheelings and dealings of this psychopathic Martian family. They apparently celebrate Thanksgiving on Mars as the November 2001 update is titled "The King delivers his Thanksgiving address." I guess ol' Chris Columbus also crashed into Mars as well.

The Royal Constitution of the Kingdom of Zarahemla - Words simply cannot describe this so I won't even bother.

The Coronation of HRH Spence, King of Zarahemla - This ceremonial coronation (naturally) took place in an AOL chatroom named "Rex Zarahemla Chat44." The entire painful chat log is printed here. It makes me pray for death.