Much criticism has been leveled as of late at the concept of "safe spaces." These are places, often on college campuses, where people can get away from stressful or hostile environments to relieve some pressure.

The safe space, Ms. Byron explained, was intended to give people who might find comments "troubling" or "triggering," a place to recuperate. The room was equipped with cookies, coloring books, bubbles, Play-Doh, calming music, pillows, blankets and a video of frolicking puppies, as well as students and staff members trained to deal with trauma.

Some claim that safe spaces are preventing students and others from engaging in intellectually challenging debate. This ignores the long history of important safe spaces. 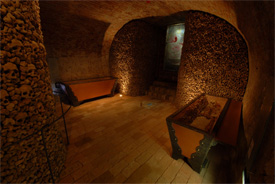 This safe space was constructed for Pope Stephen beneath a private altar only used by bishops to offer express prayers to the secret, upper-tier of heaven. Beneath the trapdoor, down the ladder, Stephen found relaxation from his woes dealing with the Gauls by caressing the skulls of various past popes and bishops of the church. A golden statue of Stephen's favorite animal, a giraffe, watched over him while Stephen luxuriated on satin pillows and drank pitchers of olive oil. He was often visited by the papal therapist. Unfortunately, the location of Pope Stephen's safe space was well known and did little to deter the supporters of Alberic II of Spoleto, who tortured him with their mocking words and also with their mutilating swords. 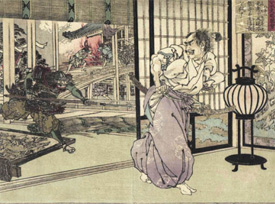 Oda Nobunaga, one of the great warlords of Japan's Warring States period, frequently heard disturbing reports from his scouts and emissaries which caused him to seek solace in a specially-built dojo at the Honno-ji Temple. This room included huggable practice dummies, ultra-soft hug pillows, soothing teas and steam buns, and a geisha plucking the strings of a koto. Unfortunately, Honno-ji was set fire by Akechi archers during a coup. Nobunaga was squeezing his hug pillow so intensely that he failed to hear the warning from his bodyguards until it was too late. Realizing he was trapped and would be captured and beheaded by conspirators, Nobunaga experienced suicidal ideation and committed seppuku when his friends and trained social workers failed to intervene.

Catherine the Great's No Judging Palace

Russian ruler Catherine the Great, who dealt with a useless Tsar of a husband and peasant uprisings, decided to get away from her troubles by building a palace outside of Moscow where absolutely no judging was allowed. She called it Planeta Idoneitatem and included reflecting pools, swans, a thousand square acres of hedge mazes, candy for breakfast, a room for pillow fights, a bed designed to resemble a giant crib, and a violinist who followed her around playing caprices. Planeta Idoneitatem was sacked and burned during a peasant uprising, but thankfully Catherine had her revenge and ordered her favorite horses to parade over the captured revolutionaries. 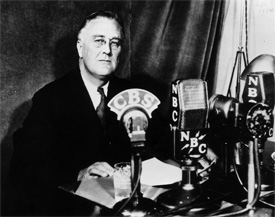 FDR kept a small room just off the Oval Office to retreat to whenever he heard mention of "polio" or spoke to generals who disagreed with his plans to deal with the Japanese. This room included a special blanket Eleanor made for him, a teddy bear he was given by a child, and hundreds of letters from citizens calling him a great president. It was also well stocked with rootbeers and candied popcorn. When Pearl Harbor was attacked, FDR was in the midst of recovering from a very upsetting mention of polio victims as cripples, spending almost two full days binge-listening to The Adventures of Superman radio plays before emerging to learn the USA had been attacked.

Parks carried a basket with her at all times and when she was stressed out, particularly by systemic racism, she put this basket over her head and took comfort in the sweet, perfumed scent of lilacs, a special pillow, and a small collection of painted figurines. She considered sitting at the front of the bus as early as 1951, but instead she was advised to stay where she is most comfortable by a therapist who left notes in the basket. She decided to spend several years inside the basket at the back of the bus. 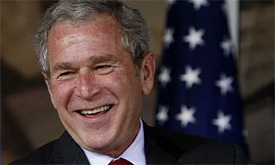 For crises involving national security, George W. Bush headed to the famous "Situation Room." When the "situation" was a challenge to his beliefs and ways of thinking, Bush headed to the less well known "Other Situation Room." When Laura told him no fireman's poles in the White House, he headed there. When Dick Cheney yelled at Bush for sitting at his desk and eating all of the candy out of the bowl at once, Bush retreated to the Other Situation Room. Inside were all sorts of art supplies for painting and drawing, a collection of Bush's favorite Chris Farley and David Spade movies, and a cassingle of John Fogerty's "Centerfield." He also had an arcade cabinet installed of Spy Hunter, but he was too afraid to play it and just liked to listen to the music and watch the demo mode.

Placed in a context, surrounded by the safe spaces of such esteemed figures of history, it's no wonder that safe spaces have such an appeal to our modern society. After all, who needs upsetting discussions or events? History can wait until you're ready.